What do people do in Euljiro-3-ga?

They put on suits and ties and go to work at the gleaming new glass and steel office towers that crowd around the intersection of Eulji-ro (을지로) and Samil-daero (삼일대로).  Or they put on white hard hats and reflective vests and go to work building two more such towers.  They drive forklifts transporting thirty-foot red steel beams that stick straight out and make the machines look like industrial narwhals. 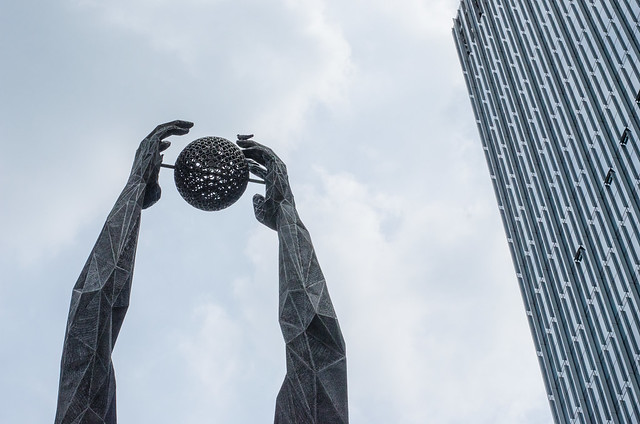 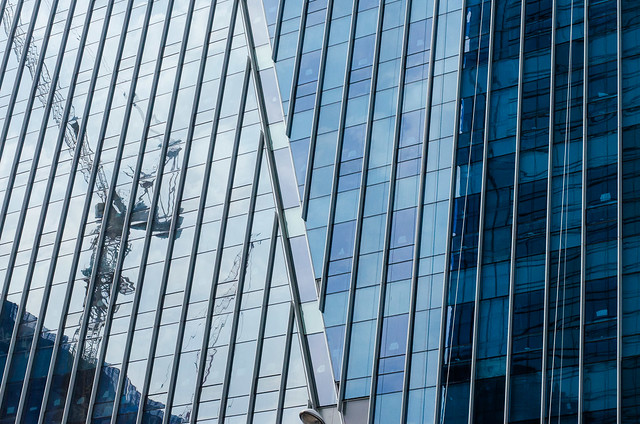 If they’re an artist, they make a sculpture of a white and silver whale skeleton whose curving spine, frozen mid-paddle, makes it seem as if it’s drifting through a dream you’re having (‘Albino Whale’ (알비노 고래) by Lee Yong-baek (이용백)).  Other artists create other corporate sponsored artwork.  They design the tall, angular sculpture of a man outside Exit 12.  The man leans back and tilts his head toward the sky, gazing up at the orb he’s holding above him.  They perch on the man’s face and chest by the dozens, if they are not people, but pigeons.  In Pine Avenue, a collection of cafes and eateries underneath the man, the people in Euljiro-3-ga go to sushi restaurants and a Crossfit gym and they drink beer at Craftworks. 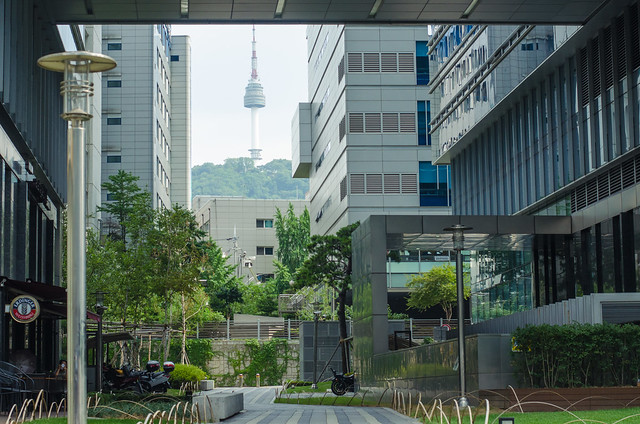 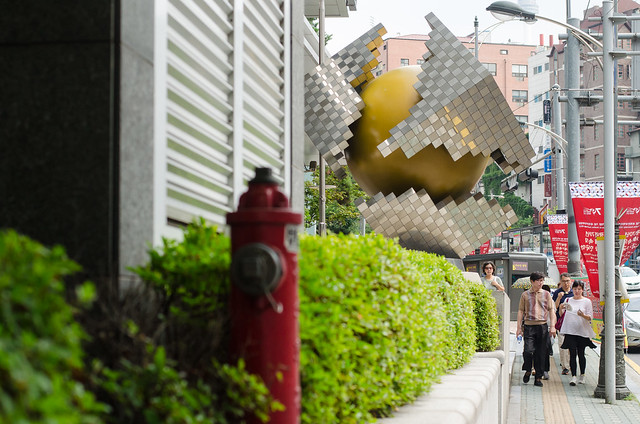 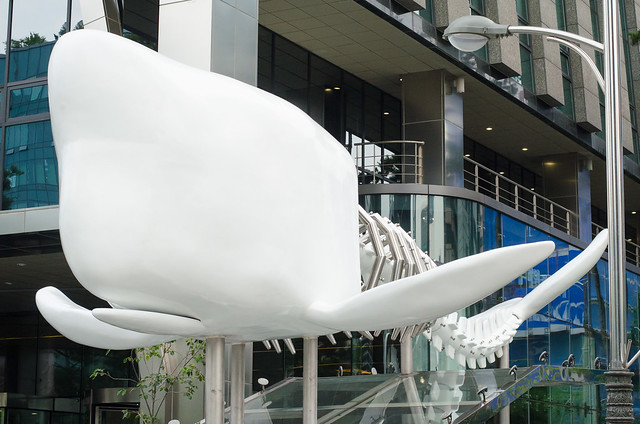 Since 1948 they’ve gone to Andongjang (안동장) for lunch, just steps from Exit 10.  The chefs here make all the usual Korean-Chinese fusion dishes, but they’re most famous for their oyster jjamppong.  The broth is more savory than the typical spicy jjamppong broth.  Its firm yellow noodles are accompanied by large meaty oysters and pieces of cabbage, mushroom, and bamboo shoot, everything cut in pieces just a bit bigger than usual so when you pull up your chopsticks after every dip in the bowl it feels as if you’ve won something.

If they need a break, they relax in Berlin Square (베를린광장), where they sit on benches of the same design, rest their feet on pavement of the same pattern, and read by the light of a streetlamp of the same make as those in the German capital.  They gaze at a Buddy Bear with images of Namdaemun and Brandenburg Gate on its sides, and they gaze at a section of the Berlin Wall.  The side that faced west, where people could walk right up to it, is covered in the remainders of scrawled graffiti and messages; the side that faced east, where people risked being shot if they approached, is nearly completely gray.  (People in Marzahn, Berlin relax in Erholungspark Marzahn, where they can sit in the Seoul Garden.) 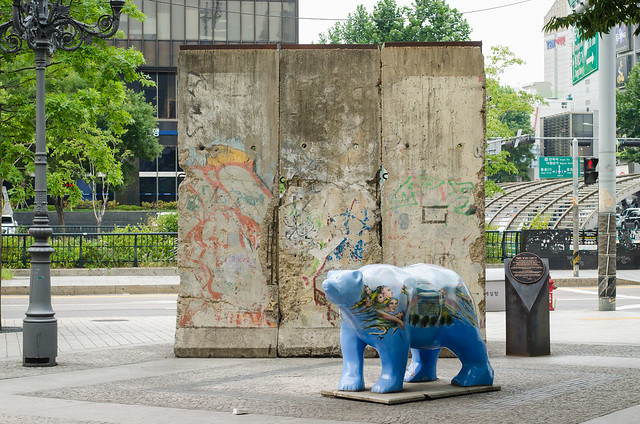 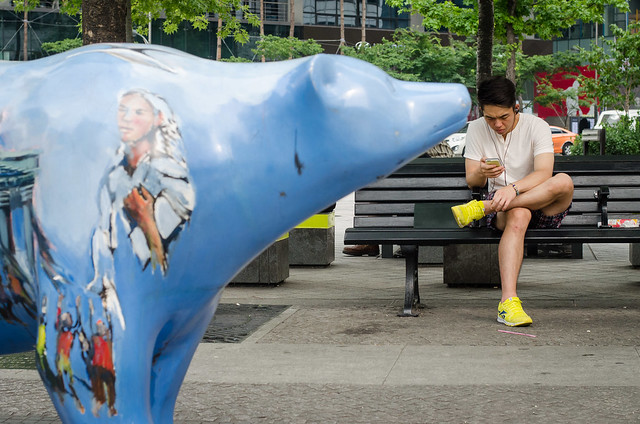 Alternatively, they head for a stretch of the Cheonggye Stream (청계천) where the vegetation along either side is often thick enough that they can’t see the water.  They sit on tiered steps in the shade beneath Gwansu Bridge (관수교) unless it’s raining, in which case they evacuate the area immediately, as the nearby signs instruct them, before the floodgates above them open and dump excess rainwater into the stream. 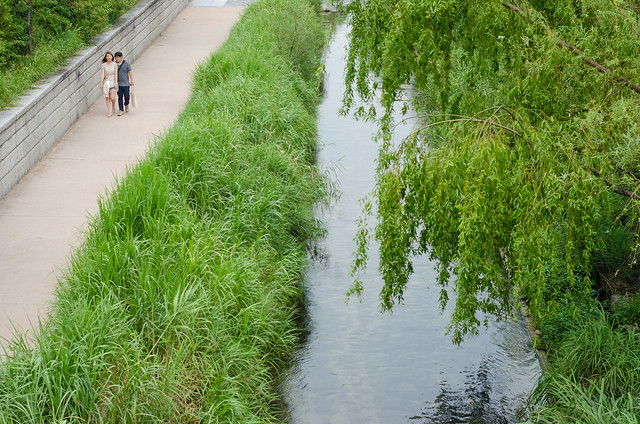 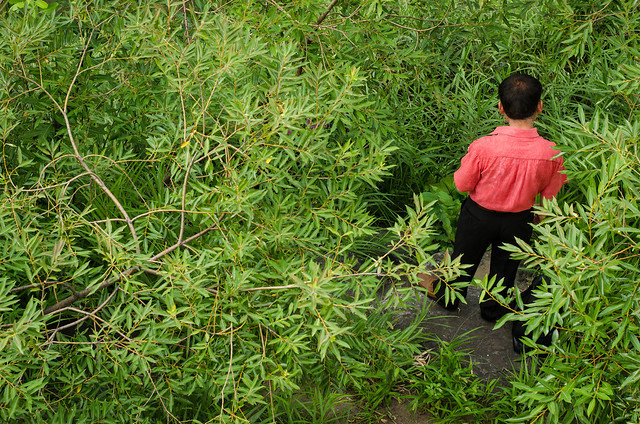 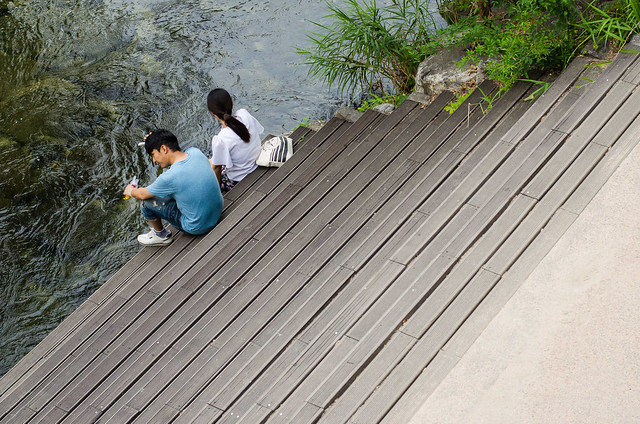 On the street in front of the Cheonggye they sell tools.  They sell pneumatic drills, weed-whackers, gas valves, and nuts and washers in all sizes.  They sell floodlights, magnets, chainsaws, and rough brown circles for disk sanders.  They sell screwdrivers, traffic cones, ‘No Parking’ signs, tape measures, and swiveling wheels for carts.  They sell circular saws, coils of rope, hammers, marble tiles, and concrete slabs embossed with yellow, Lego-like bumps on one side that serve as sidewalk guides for the blind.  They sell packing tape, duct tape, and caution tape.  They sell Shop-Vacs, caulk, power winches, and drill bits the width of a pair of fingers.

On Eulji-ro they sell bath accessories.  They have rows of toilets and urinals for viewing in showrooms. On sidewalks in front of their stores they set up displays of faucet handles, lined up like taps at a bar.  Next to these are washbasins in a faux Greek or Roman style and the occasional clawfoot tub.  They polish the steel and ceramic so it gleams.  Slightly further east, out Exit 6 or 7, they sell lighting fixtures.  They sell fluorescent bulbs, iridescent bulbs, and LED bulbs.  They sell lights encased in woven frames of reed or wood that look like they were crafted in a Scandinavian marsh.  They sell Steampunky light fixtures of large, old-fashioned bulbs with looping or zig-zagging filaments screwed into a frame of black metal piping.  Scattered between the bath shops and the lighting shops, they sell miscellaneous household and office goods: mail boxes, music stands, magazine racks. 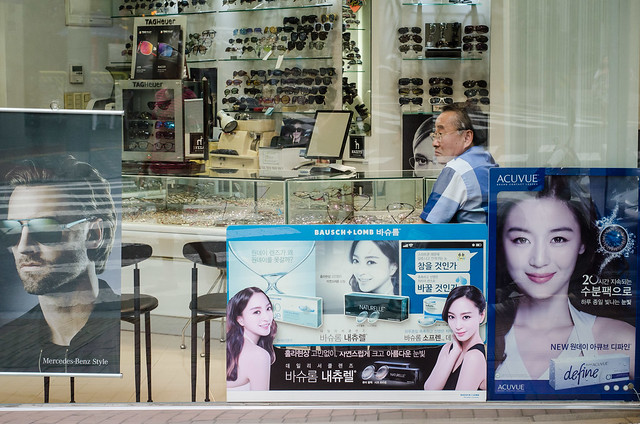 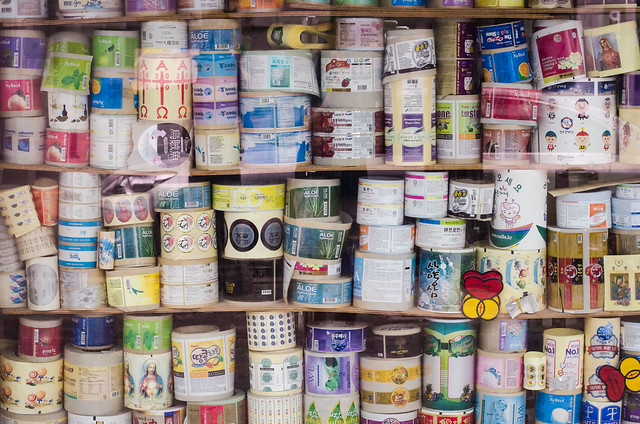 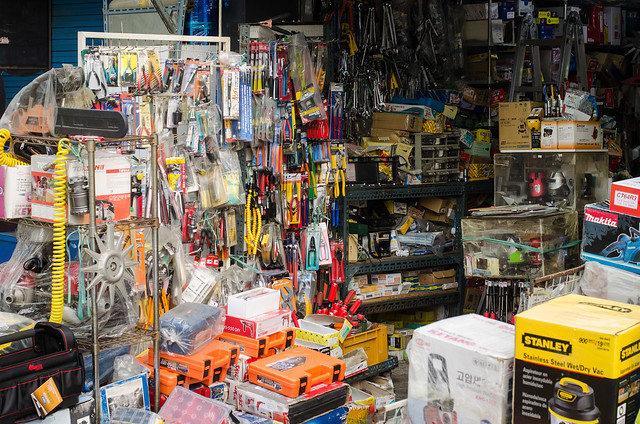 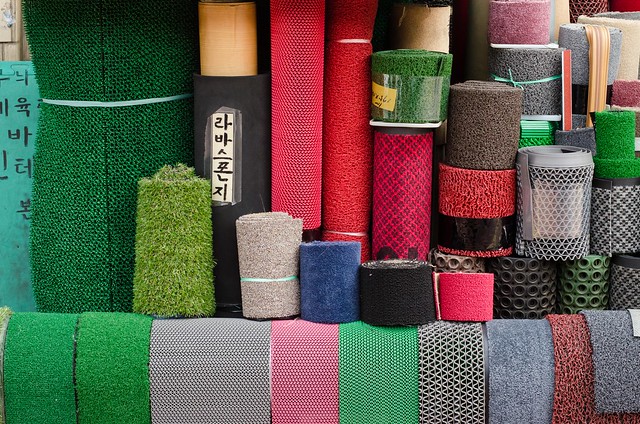 In the back streets between Eulji-ro and the Cheonggye, people sell more of these things in old buildings that look nothing like the glossy structures on the main intersection.  The further one wanders in, the smaller the alleys get and the older the shops appear.  Old men play Go amid the smell of grease and metal outside machine shops, while nearby another man works in a shop where the entire floor is covered in rusty metal hooks.  An ancient bike, all metal and dirt and grease, no paint, is parked in the alley.  Perched on a tiny stool on the sidewalk, a roving knife-sharpener scrapes a blade across a whetstone.  Middle-aged men operate band saws or large presses or just watch TV.  Porters ferry things around on two-wheeled dollies, and motorcycle drivers drop off and pick up deliveries.  It’s nearly all men who do these things in the alleys.  Most of the women who are here run cheap, simple restaurants and bars that the machinists and shop owners frequent, or they deliver coffee from old-fashioned dabangs, or teahouses. 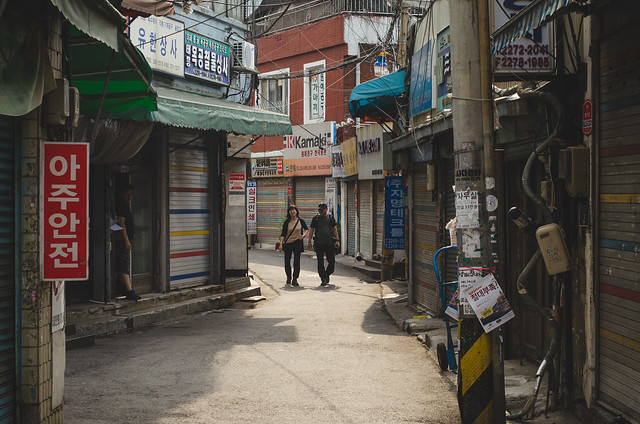 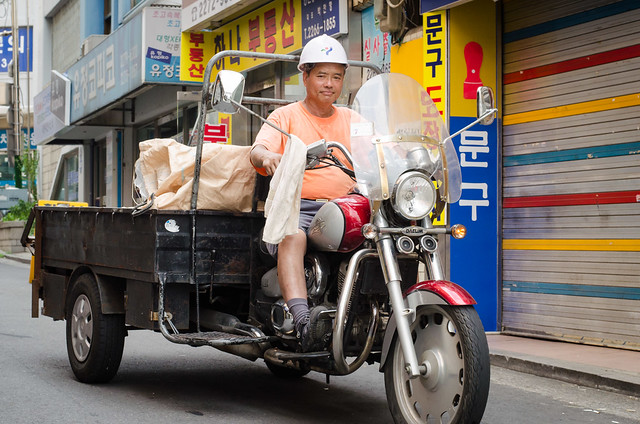 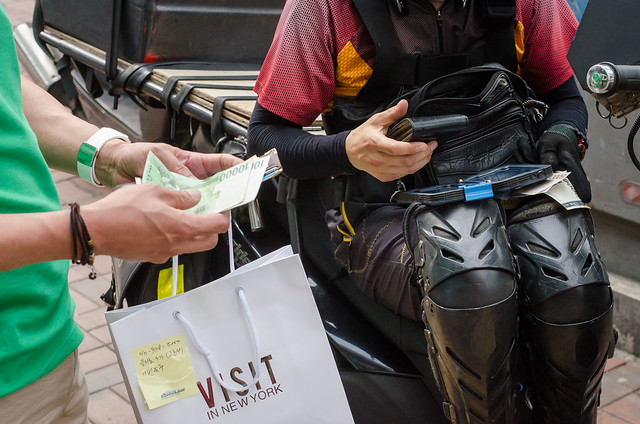 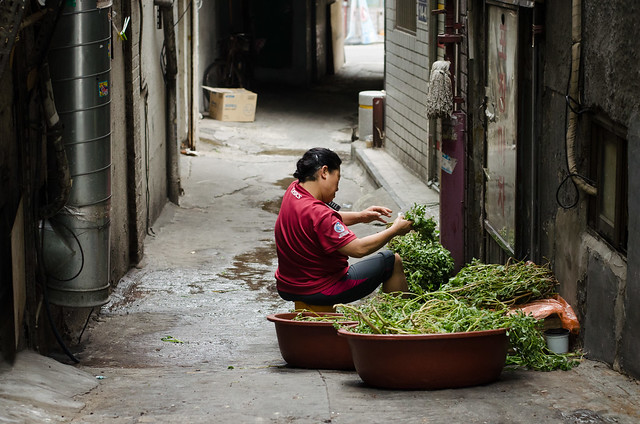 South of Eulji-ro, office workers on their lunch breaks step out of sleek izakayas and British-style brunch cafes.  Or they opt for something more old-school, like the golbaengi (골뱅이) (snail) restaurants in the ramshackle buildings behind the sculpture of the man with pigeons on his face.  They file down Chungmu-ro (충무로), coffee cups in hand, past stores where people make and sell picture frames or trophies and plaques.  Outside a phone shop, they don’t play Go or janggi, Korean chess, at the small wooden table set up on the corner, the one surrounded by mismatched chairs, with a giant rainbow umbrella providing shade, and with game boards and bowls of black and white stones on it.  If they’re tourists, they might make the short walk from Exit 8 to the intersection with Mareunnae-ro (마른내로), where Myeongbo Art Hall (명보아트홀) sits on the corner, conspicuously larger and newer than anything else surrounding it.  They might pause to indulge a fantasy in front of the plastic cartoon cutouts of paparazzi outside the entrance before going inside to watch one of the non-verbal performances that the country likes so much, like ‘Jump’ or ‘Drumcat.’ 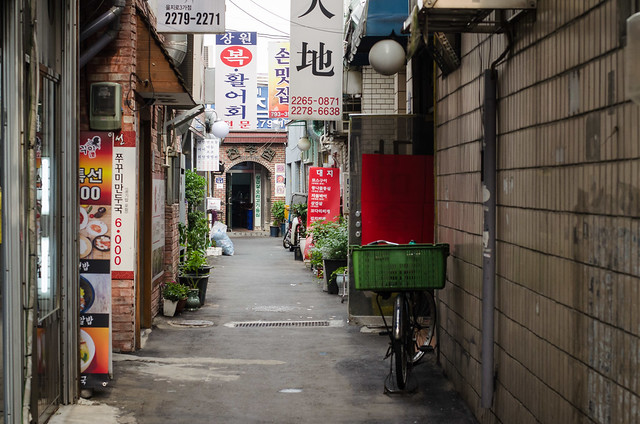 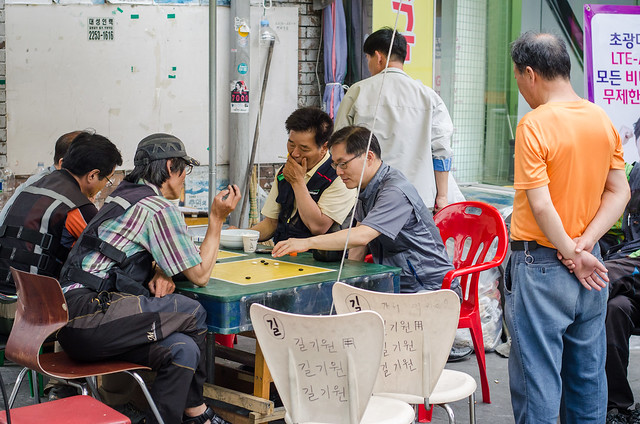 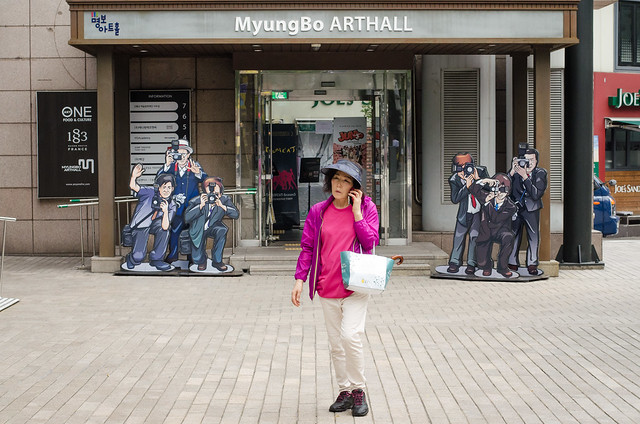 Further south, in the streets between Chungmu-ro and Supyo-ro (수표로), they shop at Chungmuro’s camera stores.  They buy Leicas, film, tripods, and Polaroids.  If they’re really serious they can buy two-foot long lenses and professional lighting equipment.  If their camera is broken, they get it repaired.  If they want to mount their work, they get matting and framing done here. 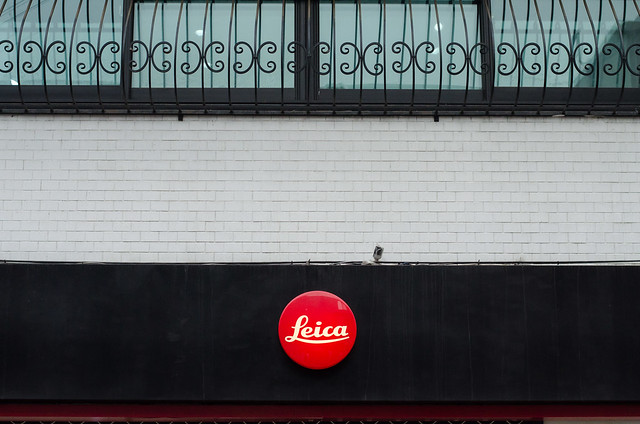 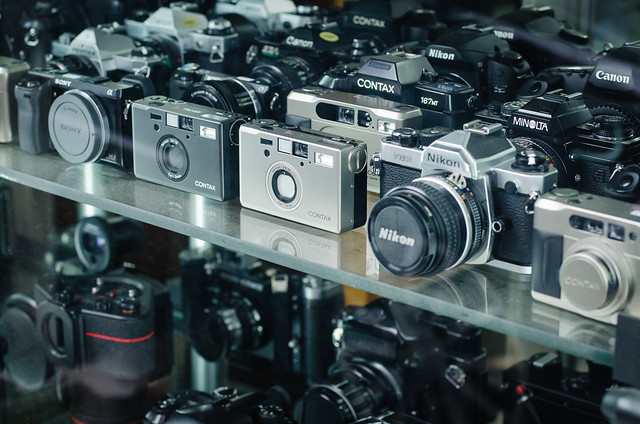 On Mareunnae-ro and in the backstreets just off it people work in shops that make and sell shopping bags, diaries, certificates and greeting cards, leather phone cases and diploma covers, and the plastic handheld fans that are given away at promotions.  Nearly everywhere else, in whatever space isn’t taken up by these shops in the alleys between Eulji-ro and Toegye-ro (퇴계로), are printers.  The workers in these shops wear white tank tops and toil in hot rooms where enormous machines fill half a room and spit out advertisements for golf courses, labels for Tupperware containers, and magazine pages.  They work amidst the head-lightening smell of glue and the crisp, clean smell of fresh paper.  They maneuver around stacks of printed paper that bears duplicate or triplicate images, yet to be cut, and around others that are untouched white.  They leave forklifts parked in the alleys outside, and occasionally they climb into one and slide its prongs into the slots in pallets that hold towers of A1-size paper encased in brown wrapping paper. 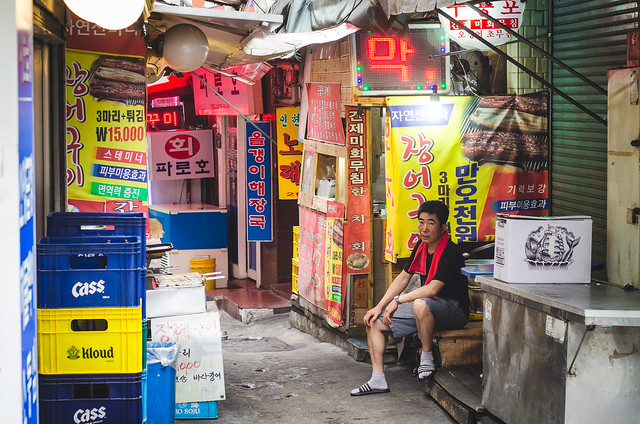 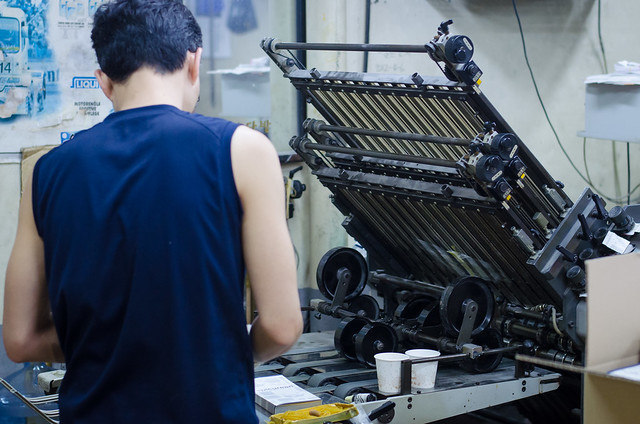 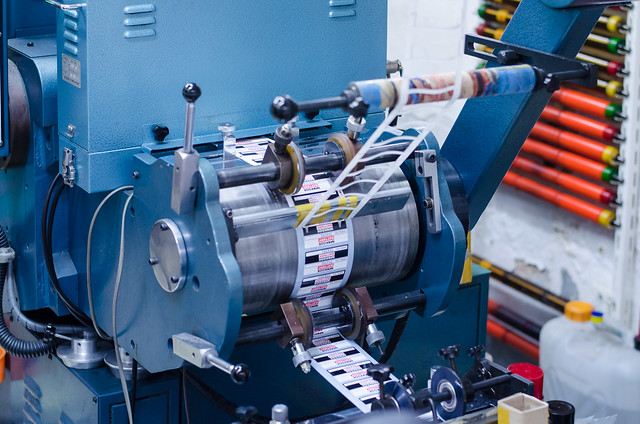 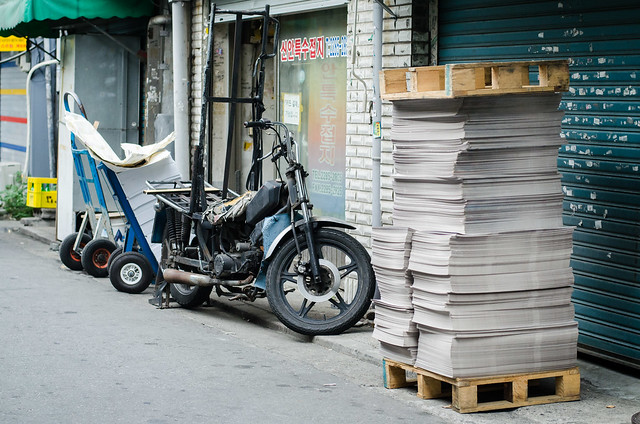 Amidst all this industry, down Eulji-ro from Exit 7 the receptionist at the Sampoong Arcade (삼풍상가) sits attentively at a desk in the entryway, while across the polished marble floor employees who work in the building’s various offices wait in front of the elevator bank.  They do business in this arcade, and you could say that they do the same thing at Seun Daerim Arcade (세운대림상가) across the street, but only in the vaguest way.  In Daerim Arcade, workers operate yet more lighting shops; they sell walkie-talkies and bullhorns, and stereo equipment.  They take TVs apart for their individual parts and they try to offload old tape decks.  They store the discarded chassis of old Korean and Japanese arcade games, which makes walking through the aisles feel like walking through the graveyard of a slightly alternative childhood you never quite had.  Next to these they store crane games and video poker and slot machines, some defunct, some in perfect working order and waiting for a buyer.  And somewhere, someone—a potential customer? a bored employee?—repeatedly mutters ‘Ah’ into a microphone, and since in the cramped, enclosed space you can’t tell where it’s coming from it makes you imagine God meditating, uttering this mantra over and over as all around Him the work of Euljiro-3-ga carries on. 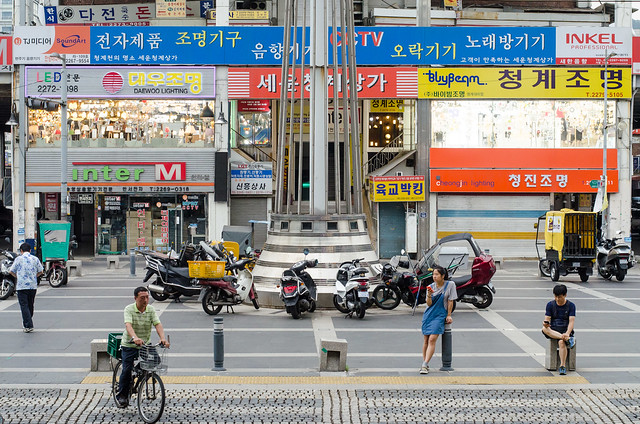 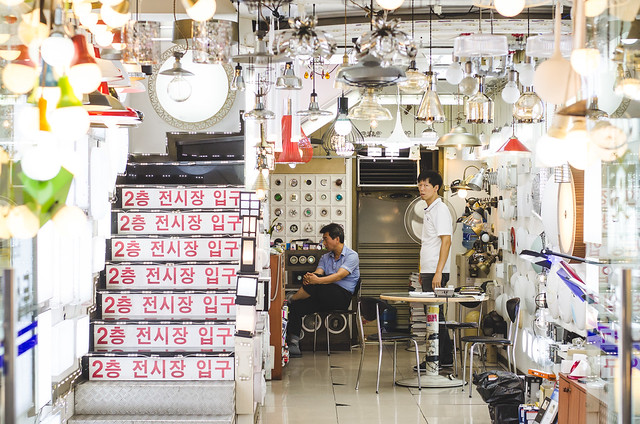 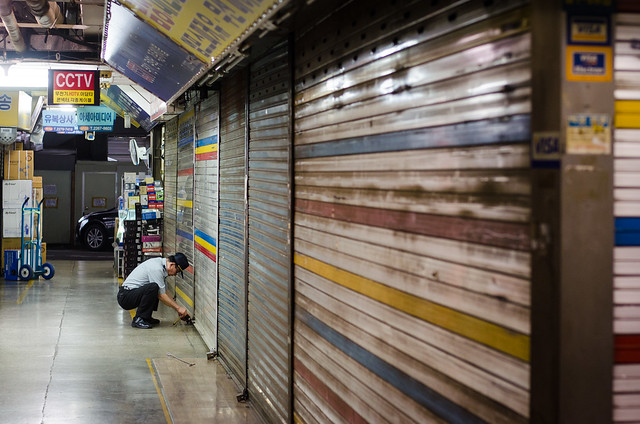