I like Yeongdeungpo-gu.  It doesn’t have much charm, but it has more interesting and idiosyncratic spots than most people realize, or at least remember: the machine shops and art scene in Mullae, the Chinese neighborhood in Daerim, the parks and behemoth Yoido Full Gospel Church on Yeouido, Seonyudo’s industrial island oasis.  It’s also the (mostly) former site of many of the factories that helped drive Seoul’s postwar growth, and while it’s now in the throes of redevelopment and gentrification, some of those factories and industrial sites can still be found here and there, leaving Yeongdeungpo a district balanced between eras.

It’s the new Yeongdeungpo you see first when you arrive at Dangsan Station.  Beneath fading cherry blossoms on Yangpyeong-ro (양평로), the Thursday afternoon sidewalks were unexpectedly busy with people going in and out of cafes, grabbing lunch, and running errands.  On the corner outside Exit 12 about three dozen housewives nosed through the racks of discount clothes set up outside NC Ladies, a lone husband amongst them, showing great forbearance.  A recorded message, unusually calm, came out of a cell phone shop’s speakers, and a bit further down a trio of ajeosshis chatted in the middle of the sidewalk as pedestrians flowed around them.  With elections approaching, campaign banners were also strung up along the main streets, the ruling Saenuri Party being better represented, or at least making a stronger push in the area. 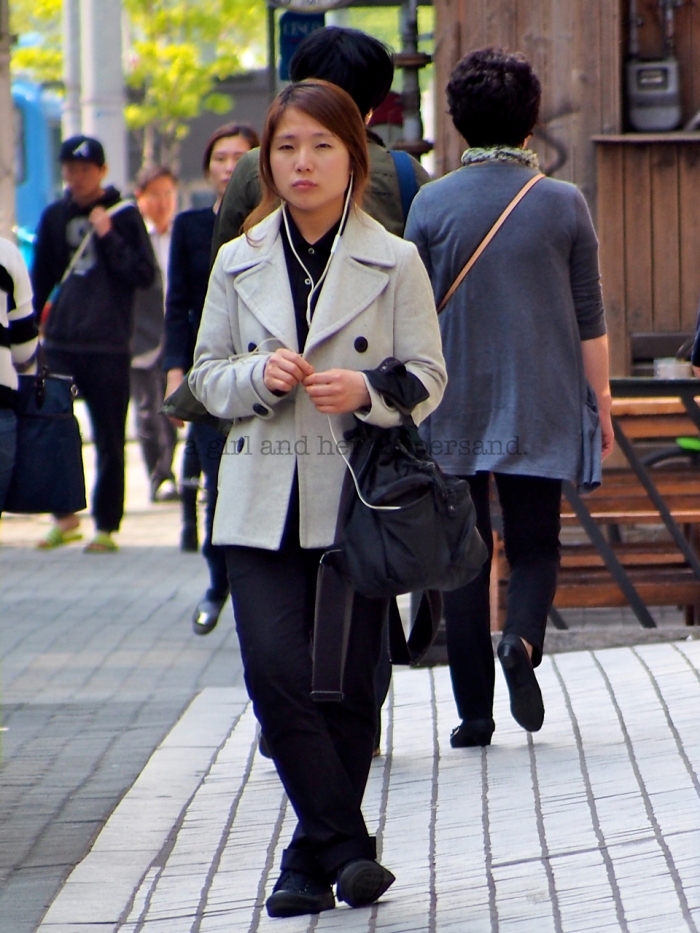 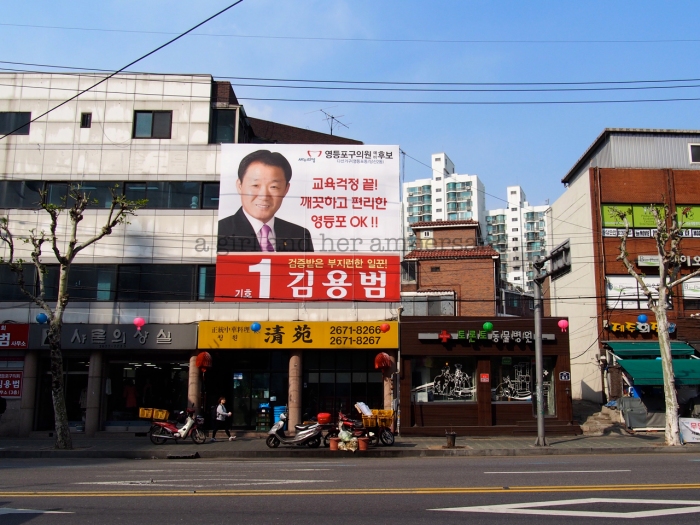 A couple blocks east of Exit 9 was a large billboard for a new housing development called Riverich Officement.  First I wondered at the car wreck of a word that is ‘officement,’ though after a moment I conceded that what it was going for (office + apartment) was actually more sensible than the more common ‘officetel,’ which combines ‘office’ and… what?  Hotel?  There’s nothing hotel-y about them.  Regardless, it was still awkward as hell.  Then I turned my attention to the slogan (if that’s the right word) splashed across the top in large letters: ‘좋다!  2룸…좋다!  한강~’  Pardon?  Now, my Korean can generously be described as workmanlike, but, seriously, nobody actually talks like that, do they?  ‘It’s good!  2 rooms…good!  Han River~’

Anyway, the prospective tenants pictured alongside that bit of poetry give you a pretty good idea of what the area envisions itself to be.  The handsome young couple and their baby would likely feel right at home in any of the officements or officetels or aparts or whatever that dominate the backstreets of the eminently middle-class neighborhood, with churches and schools rounding out the mix.  Walking around through these streets south of the station I passed a guy selling flowers and other potted plants from a parked truck and watched as two women led a gaggle of ten day care kids down the sidewalk, all of the toddlers with their wrists attached to the long rope held by their minders, like some sort of adorable chain gang.

A bit further west, across Dangsan-ro (당산로), were more apartment complexes, though here they were overshadowed by shiny new office towers, workers on cigarette breaks clumped in small groups outside.  Judging by the clothing that a lot of them were wearing, I guessed that many of the companies here were tech firms.  There were more jeans and hoodies than you’d ever see in Yeouido or Jongno, and you wouldn’t ever spot an employee with a t-shirt that read ‘Blue Jeans…For Your Ass’ in those places either.

This was still Yeongdeungpo, though, and tucked amid the new developments were remnants of the district’s previous iteration, small factories and places like the tin-roofed concrete shack that stood just across from a convenience store, tires piled on its floor inside and faded white letters in its windows that read ‘엔진오일엔진튠업’ (‘engine oil, engine tune-up’).

North of the station, in the little side streets between the main drag and the river, were smaller apartment buildings, some older and, particularly towards the west, some newer.  From Exit 1 a little angled street led into one of those areas of restaurants and drinking establishments often found near offices, plastic garlands of miniature national flags strung up overhead.  On the east side of Dangsan-ro the alleys were narrower and more residential, and devoid of any recent development.  Some of the homes had tin roofs, and on some apartment buildings the apartment numbers were handwritten on the front door in magic marker. 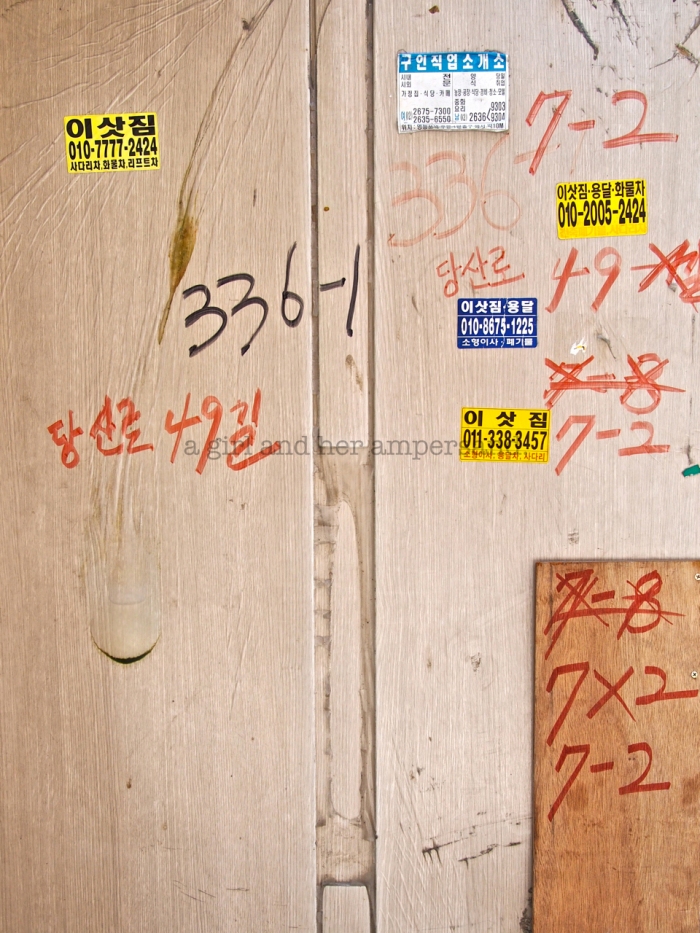 Dangsan abuts the river, so naturally a stretch of the Han River Park isn’t far away.  From Exit 4, I made a U-turn and then hung a right at the large sign just before the highway, passing a bike rental office before arriving at the tunnel leading to the Han River Park (Yanghwa District) (한강시민공원 (양화지구)).  Inside the tunnel, four bikers in matching suits rolled past, headed for the popular riverside bike path. 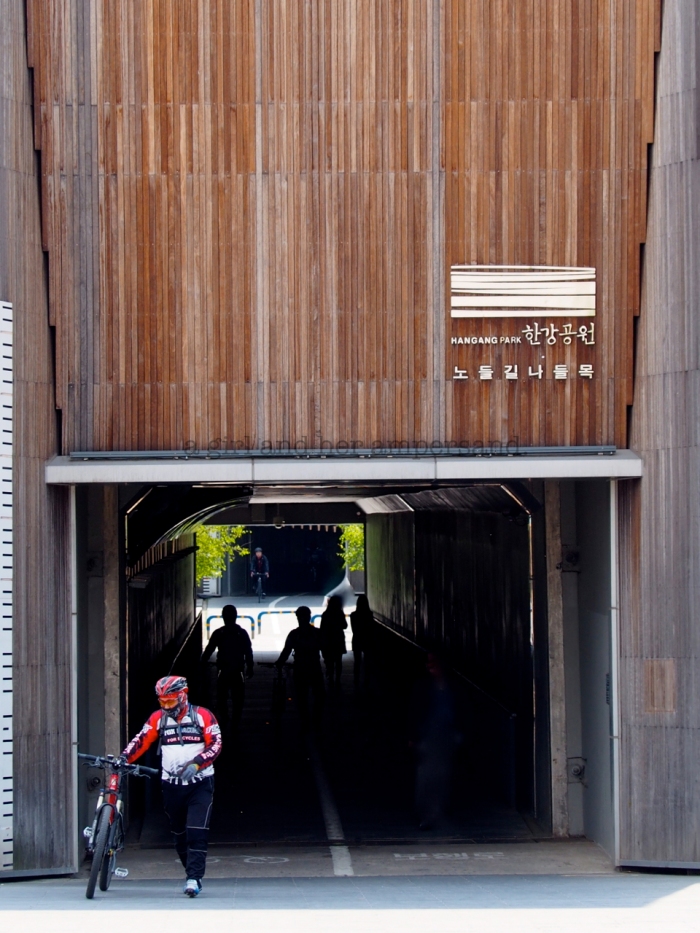 I came out by an area of reeds and long grasses, not far from the Dangsan Railway Bridge, where Line 2 trains rolled back and forth between the north and south sides of town.  I walked west, passing under the bridge and along a rather barren stretch of riverbank – young trees and small, evenly spaced nubs of grass or reeds poking up out of the dirt, brown on brown.  At the shoreline was the Ocean Sports Training Center (해양스포츠훈련장), where a mini sailboat class was getting underway.  About two dozen teenagers in faded orange lifejackets were sitting or standing on a dock, while seven angular white sails stood upright in the water below them.  The kids took turns clambering down into the small boats and being guided out into the river a few dozen meters and back by instructors in motorized rafts. 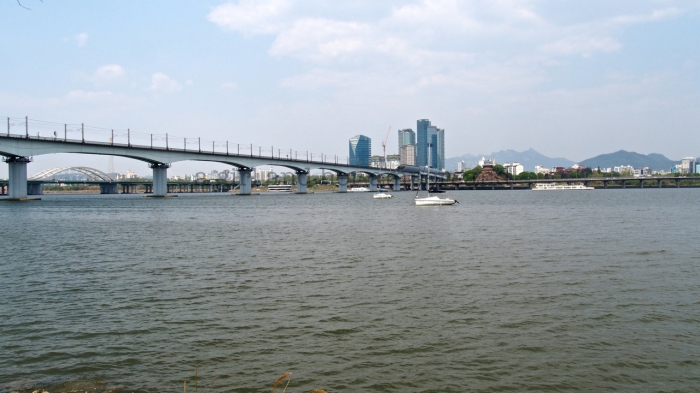 This stretch of the riverfront is part of the Yeongdeungpo Ecological Circular Walkway (영등포생태순환길), which, to the west, runs to the point where the Anyang Stream (안양천) empties into the Han, and to the east encircles Yeouido.  I doubled back and followed the walkway and the park towards the island, accompanied by joggers and bikers and a guy coming in the opposite direction who was taking, no kidding, a parrot for a walk.  Perched on his hand, like, all green and tropical and pruning its feathers and going for a walk.  A parrot.  Going for a walk.  Because, well, sure.

Up in the distance, the pink cherry blossoms behind the National Assembly building were still there, but there didn’t seem to be anyone strolling beneath them.  It was a poor day for it; although the air was warm and a soft breeze was blowing a miserable haze was hanging over the city, leaving the sky a dun-colored smudge.  On Yeouido’s far end the 63 Building was visible, though in the unclear air it seemed more like a mirage than Yeongdeungpo’s signature landmark. 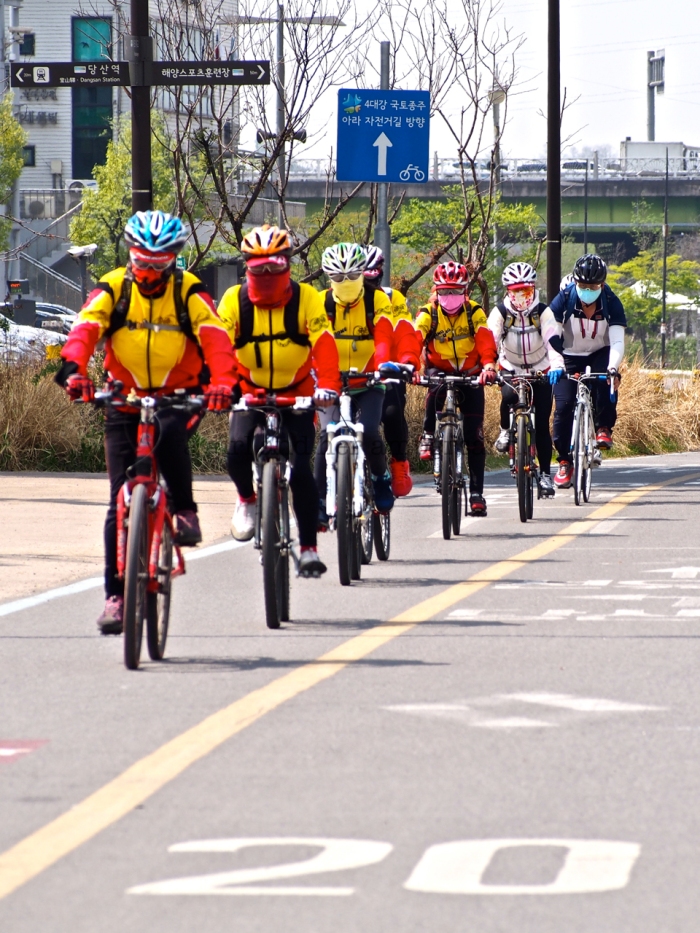