I had expected Gaehwa to be one of the dullest stations in the entire course of this project, a visit that I’d finish up in under an hour and have written in less than that.  Its most prominent feature is, after all, the fact that it’s the headquarters of the Seoul Metro Line 9 Corporation, an organization that is nothing if not clearheaded about its mission.  I thought that I could peek out the doors of Exit 2, scan across the rail yards and the Gangseo bus terminal, and then wander through the little neighborhood of Naechon (내촌) across Gaehwa-dong-ro (개화동로) for a few minutes before capping my pen and calling it a job well done.  Right on the former, totally wrong on the latter.

Out Exit 1, beyond a man selling big bags of puffed rice snacks on one corner and a pojangmacha truck selling toast and ramen on the other, I could see the treed slope of Gaehwa Mountain.  Most of the trees were winter bare, but a crown of twenty or so evergreens ran along the top.  Just past an overhead highway was a small nameless stream.  I followed its walking path north, alongside water that flowed slowly in a thin channel between iced-up edges, and about thirty meters from where I’d started there were two dozen small bones sitting on the side of the path.  They looked like they had come from some small mammal – a cat or a dog maybe – and they were clean and white, bare of any flesh or tendon that had clung to them.

Slightly further north, the little channel met the Daeduduk Stream (대두둑천).  It was covered in snow and crisscrossed by footprints, but I couldn’t tell if the stream had frozen solid or if it was emptied of water, though it seemed like the latter.  The area around the stream felt more like the Korean countryside than Seoul – just off the highway where intercity buses ran back and forth, backhoes and dump trucks were parked and signs advertised plastics, springs, steel, and a strawberry farm. 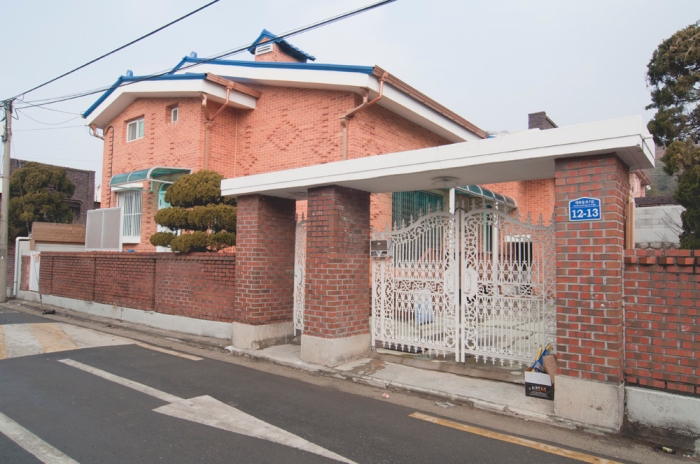 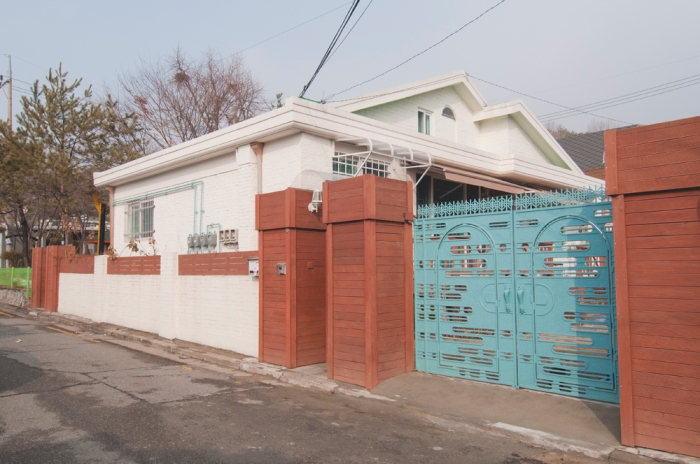 Across Gaehwa-dong-ro was Naechon, a petite neighborhood of mostly small homes, many with blue, orange, or green tile roofs, though there were also some rather expensive looking houses (one with a Mercedes and BMW parked outside) whose owners had likely taken advantage of the cheaper land to build places they couldn’t have in Gangnam.  After crossing the road I turned left onto Gaehwa-dong-ro-11-gil (개화동로11길).  There were some simple beauty salons and grocers, and a man was shoveling snow off of a pile and tossing it into the street so it would melt in the above-average temperatures. 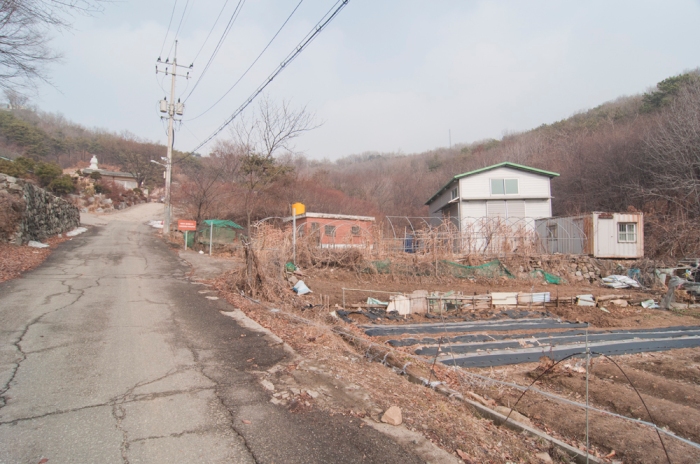 I was following a pair of signs pointing to Mata Temple and the Gangseo Trail, and at the end of Gaehwa-dong-ro-11-gi they directed me to the left and then quickly to the right.  At the end of an inclined drive that ran past some small fields where garden sheds sat, their metal frames exposed under ripped plastic, was Mata Temple (마타사).  The temple itself isn’t much to look at – white panel siding under a black shingle roof – but it is home to a standing stone Buddha (석불입상) that is Seoul Tangible Cultural Property No. 249.  The information on the temple proper available at the site was a little fuzzy – it’s presumed to date from the late Goryeo period and in 1924 a new temple was built here, but what happened in the meantime was left unsaid.  As for the statue, which now stands outside the temple, the 3.2-meter high figure was sculpted in the Joseon period, in a style popular in Gyeonggi-do and Chungcheong-do.  A disc-shaped canopy sits on its head above long ears and a wide nose, and its hands are gathered over its heart in what the informational sign said seemed to be Dharmachakra mudra.  The sign also claimed that at some point the statue was buried higher up Gaehwa Mountain, though why and when also went unexplained.

In front of the statue eight bricks of soybean paste were hanging in slings made from straw rope, drying in the sun, and behind it was a bare rock slope dotted with several smaller Buddhas and, at the top, a larger seated one, all of them gazing out over the runways, the taxiing planes, and air traffic control tower of Gimpo Airport.

To the right of the standing Buddha, a path curled around to the entrance to the Gangseo Trail (강서둘레길), which was marked by a handsome wood gate and sign.  The trails run up and around Gaehwa Mountian (개화산), but this particular entrance also bore a bit of historical significance, as it’s where you’ll find a Memorial to the Loyal Dead (호국충혼위령비) of the 11th, 12th, and 15th regiments of Korea’s 1st Army Division, as the metal plaque at the trailhead announces.  For the four days after the North’s invasion of the South on June 25, 1950 that triggered the Korean War, the 1,100-plus troops of those three regiments held the North’s troops at bay after retreating to Gaehwa Mountain from their original positions.  All of the men perished, but their sacrifices are honored in a memorial service held every June by the Association of Gaehwasan Battle Bereaved Families and the 1st Army Division (개화산전투전사자유족회).

After you pass through the trailhead gate and go up a flight of stairs you’ll come to the memorial for the men of the 11th, 12th, and 15th, which sits in a small grass clearing with thick slabs of black stone bearing the names of the soldiers on either side.  It was very quiet.  To the left a Korean flag hung from a short pole, and on the small altar in front of the memorial someone had left an opened bottle of Chamiseul and a bag of Coco Mong Milk Balls.