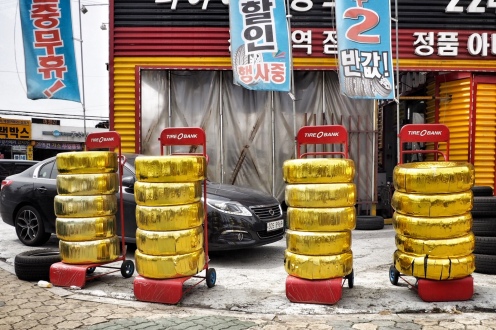 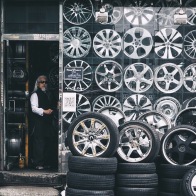 ‘You looking for a car?’

My girlfriend and I hadn’t walked more than twenty feet from the station when we were approached by a middle-aged man in a puffy coat.  Milling about the intersection behind him were a dozen more guys of the same age, all similarly attired in padded winter jackets and hiking caps, eyeing us as we said no to our questioner and then stopped on the corner so I could take notes.  The small, broad intersection outside of Exits 6 and 7 was surrounded by car audio stores and tire shops, the latter with merchandise wrapped in gold or silver foil and stacked up in towers outside their doors.  From somewhere nearby came the sound of pneumatic wrenches whirring away.

Before visiting Janghanpyeong, the area had been utterly anonymous to me.  I knew nothing about it.  I didn’t know where it was.  I didn’t recall ever even hearing its name before.  It turned out, however, to be one of the most idiosyncratically unique parts of Seoul I’ve been to.  It’s the city’s used car lot, its junkyard, its scrapyard, its garage, its salvage shop.  What begins in the automotive plants that have reshaped the country and made Hyundai and Kia household names worldwide so often ends here.  (An interesting side note, at least according to Wikipedia: The very first Korean car was built by Choi Mu-sung and his brothers in 1955 out of a modified jeep engine and a chassis made from a junk oil drum can and junked military jeep parts.  In what was probably not the best marketing decision they could have made, the brothers named it the Sibal (시발), meaning ‘inception’ or ‘new start,’ but which is only one little sibilant short of the Korean word for ‘fuck’ (씨발).) 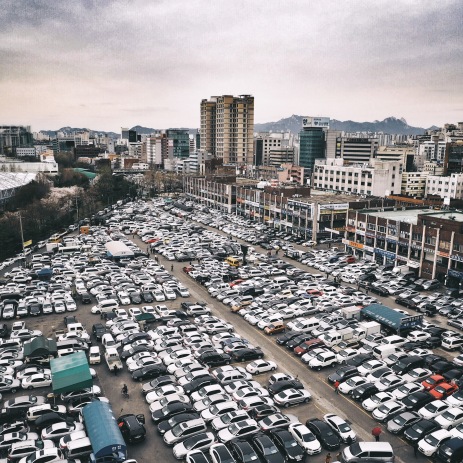 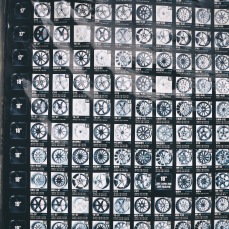 All of Janghanpyeong’s peripheral automotive enterprises stem from the presence of the Janghanpyeong Used Car Dealership (장한평자동차매매시장), the largest such market in the country.  The main entrance to the lot is a short walk from Exit 6, off Jadongchasijang-1-gil (자동차시장1길) (literally Car Market 1-Street), the first left out of the exit.  The road there is lined almost entirely by related businesses: GPS, black boxes, car audio, shops offering seat installation, window tinting, or interior cleaning services.  At a repair shop a shiny blue VW Beetle was jacked up for repairs.  More middle-aged guys in padded jackets loitered on the street, and twice more my girlfriend and I were approached and asked if we were looking to buy a used car.  The pitches lacked any of the sunnily aggressive quality that’s the default tone for car dealers, coming across instead in a quiet, almost furtive manner that had more in common with street corner hustlers who quickly say they got what you need, weed, coke, as you walk by.  The passivity may have had something to do with the fact that business here is, to put it bluntly, dying, something the men in puffy coats are well aware of and that has likely taken a toll on morale.  Koreans, compared to Americans at least, tend to be averse to buying used cars, preferring new, and if they do go used the trend is increasingly (and unsurprisingly) to make the deal over the internet.  Apart from my girlfriend and I there were virtually no other potential customers around, and this on a Sunday afternoon, when you might think that people looking to buy a car would be most likely to be out doing so.

The Janghanpyeong Used Car Dealership lot is hidden behind four run-down three-story brick buildings labeled A – D, each with automotive-related businesses in their first floors and largely empty-looking second and third floors.  The lot is fairly vast, at least by Korean standards, about the size of your typical U.S. dealership that sits next to a highway exit ramp.  Unlike at your nearest Chevy Super Center, though, there was barely enough space to hold all the available cars.  Vehicles spilled into the walkways leading through the brick buildings, and in the lot they were packed three deep, others parked perpendicularly in front of those.  It was hard to tell how you might actually extract one should you want to take it for a test drive.  This being Korea, virtually all of the vehicles in the lot came in the favored triumvirate of black, white, and gray.  Cars all had pieces of paper in their windshields that listed basic information about them, the one notable absence being the price.  Everything here is open to negotiation, and a successful deal from a buyer’s perspective is highly dependent on it, as the lot’s offerings have a reputation for things like rolled back odometers and other black arts of the used car salesman.

Circling around the far end of the lot, I came to Jangahn Motor Plaza (장안 모터 플라자), a nine-story building with plate glass windows, inside which I could see many more cars lined up on display.  More were on the roof.  I also passed a Volkswagon/Mercedez-Benz dealership, which struck a note of sharp discord with the adjacent lot.

South of the lot even more spillover from the Used Car Dealership lined up on the narrow road alongside it, though here, instead of your usual sedans and SUVs, the used vehicles for sale were mini-buses that had once belonged to after-school academies or churches, as well as the small pick-up trucks that roll slowly through neighborhoods, selling fruit or fresh fish.

Alongside these more commercial vehicles a fence separated the road from the massive Jungnang Sewage Treatment Center (서울특별시중랑물재생센터), and through the bars in the fence I could look out over a section of the enormous complex, where elevated walkways and pipes ran above numerous sunken pools.  Contrary to my expectations I couldn’t smell a thing.

The main entrance to the treatment center is at the end of the short street leading away from Exits 6 and 7, past the men in the padded jackets, and if you turn right directly in front of it you’ll find yourself on a small alley lined with low buildings.  In a few of these were open auto body shops, including one where a couple of guys were working on a detached minivan bumper, but these were the exceptions.  Most of the buildings’ storefronts had their shutters pulled down and padlocked, signs gone and phone numbers erased.  The semi-abandoned nature, coupled with the fact that the few still-open places were mechanics made the alley feel like it’d make the perfect filming location for one of the country’s beloved gangster flicks.

The streets between this alley and Cheonho-daero (천호대로), the main drag, held a smattering of cheap restaurants, a few love motels, and a large building holding the YBS Zipper company.  There were also more car part businesses, among them one that was called, curiously, the Islam Trading Group. 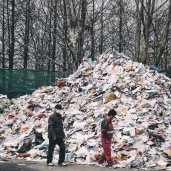 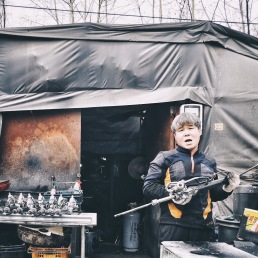 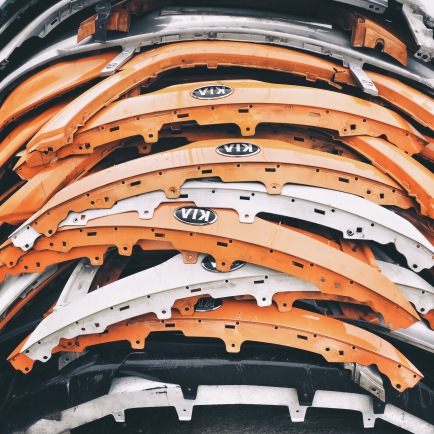 It was around this time when my girlfriend remarked that, though we’d been walking around for a good half-hour, we hadn’t seen a single woman.  I hadn’t noticed it myself, but I realized that she was right, and, indeed, Janghanpyeong is a strikingly male-dominated neighborhood, almost bizarrely so.  This also made me realize that all of the men in padded jackets who had approached us to ask if we were in the market for a used car had directed the question at my girlfriend.  Granted, this was almost certainly due to the fact that I was a foreigner, but it nevertheless struck me as a pleasant little gender reversal of the usual car-talk dynamics.

Back out on the main drag, walking west from Exit 8, I finally saw a couple of women, their backs anyway, a good block away.  They were standing on the corner in front of the Seoul Metropolitan Rapid Transit Headquarters (서울특별시도시철도공사), a hideously bizarre building, perhaps the ugliest one in Seoul.  A black glass mushroom, its lower half is wrapped in a beige concrete façade that’s bisected by a mustard-yellow exterior staircase.  Out front it’s decorated, if that’s the right word, by rows of towering golden spikes that look like something out of a perverse Thai temple or the anatomy of some fantastical beast.

While Cheonho-daero to the east is a typical collection of restaurants and banks, and Janghan-ro (장한로) to the north is a buzzily commercial stretch of supermarkets and chain cafes, as well as being home to the Institute of North Korean Studies (북한연구소), housed in an anonymous gray building with a Home Mart grocery store on the first floor, much of the rest of the neighborhood’s focus remains planted squarely on cars.

Turning right on Hancheon-ro (한천로) after a short walk from Exit 1 took me past a long stretch of auto parts stores that lined both sides of the street.  At one business near the corner hubcaps were set up on a tiered display.  Other stores advertised brakes, joints, bearings, piston rings, or steering and suspension service.  Like the area directly adjacent to the Used Car Dealership, quite a few places here looked to have gone out of business.  An old brick building with entrances that opened onto interior courtyards had some open businesses in its first floor, but most of the second and third floor walkways ringing the courtyards were taken up with piles of rubble.

Slightly further north the automotive businesses dissipated and the neighborhood became more residential.  A few new apartment buildings and commercial developments were signs of some recent moves toward gentrification, but mostly it was a humble area, filled with old brick buildings and the occasional recycling yard.  I’d been puzzled by my earlier sighting of the Islam Trading Group, but walking through the backstreets around here I passed another car parts store, and this one’s name was written across the storefront in Cyrillic characters, so maybe Janghanpyeong had some international reach. 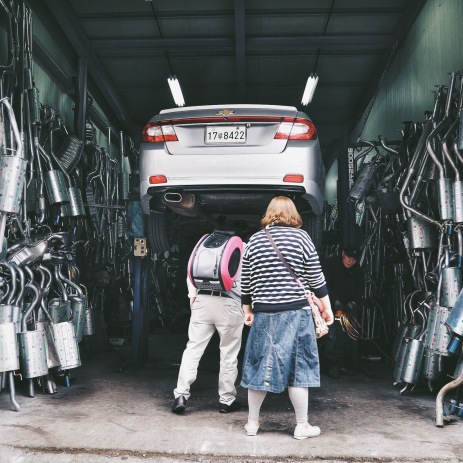 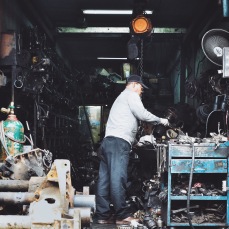 When a used car can’t be sold or fixed there’s a good chance it will meet its demise on Hancheon-ro-2-gil (한천로2길), the street paralleling Cheonho-daero and the first left out of Exit 2.  Lined for several blocks by nothing but salvage shops and smelling of grease and oil, businesses here pull apart all manner of vehicles into their bits and pieces, undoing everything that was done in the factories of Ulsan or Gwangmyeong.  Here, towers of old tires sat outside of stores, and at others front bumpers were heaped in piles like clothes at a boutique for Transformers.  Piles of mufflers looked like the discarded parts of rudimentary robots and the telltale orange of Seoul taxis was easily recognizable on doors that sat propped up against walls, long since divorced from the cabs they used to belong to.  At one salvage shop, a string of about ten brake lights and rear view mirrors hung from a crane, sparkling in the sunlight and looking like an enormous fishing lure.  Not too far away, the entire front sections of two truck chassis had managed to somehow be stacked on top of one another.  Still intact was the chassis of a Jeollabuk-do emergency vehicle that I spotted in yet another junk yard, though it was surely only a matter of time until that too was taken apart. 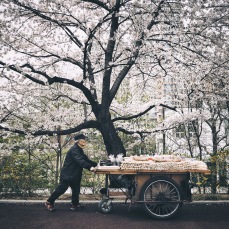 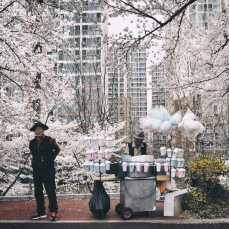 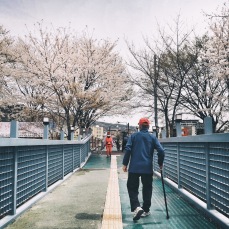