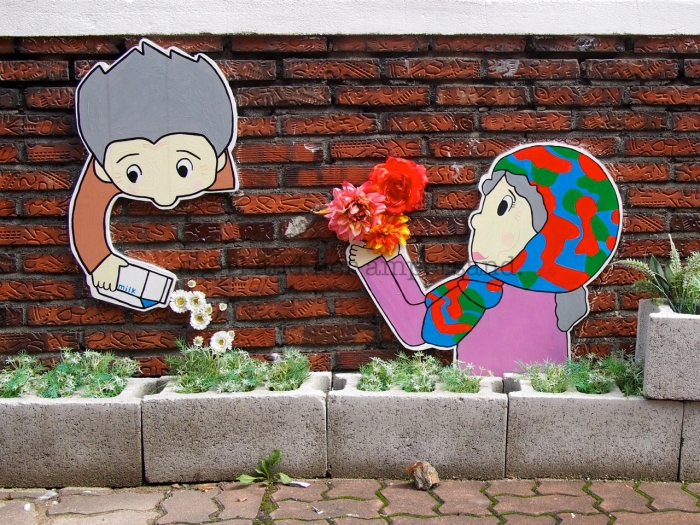 A few steps outside of Exit 1 three guys in suits were standing around a folding table, handing out literature about a new apartment development to passersby.  Behind them an old man sat smoking on some steps in a small plaza, in the middle of which was a bronze statue of Shin Ik-hee (신익희).  Shin, who was also known by the pen name Haegong, was long a major political figure, beginning with his founding of Hakuhoe (학우회), a Korean student society in Japan that he established while studying at Waseda University in the early 1910s.  Korea’s colonization by Japan was still a fresh wound, and Hakuhoe agitated for the country’s independence, a struggle that Shin continued to engage in after returning to the peninsula.  At home he founded a school, distributed the Korean Declaration of Independence, and, as the on-site plaque charmingly explains, led ‘a “hurrah” demonstration,’ by which I’m pretty sure they mean he led people in protesting shouts of ‘Korea, mansae (만세)!’ (Long live Korea!).  This, predictably, did not endear him to the Japanese authorities, and in 1919 he fled to Shanghai, where, along with other notables like Kim Gu, he helped establish the Korean Provisional Government, serving in several prominent positions.  After the end of World War II, Shin returned to Korea where he went on to be the first president of Kookmin University.  Again, he also served in significant political roles, becoming chairman of both the Interim Legislative Assembly of South Korea and, later, the National Assembly.  While campaigning to be the first president of South Korea, a position that would later to go Syngman Rhee, Shin suffered a cerebral hemorrhage and died at the age of 63.  Flanked by four stone slabs covered in Chinese writing, the statue displays a man who’s a bit fat but well dressed, in pressed slacks, a knee-length coat, and bow tie.  Shin is holding his hat in one hand and both arms are raised over his head, forever giving a ‘hurrah.’ 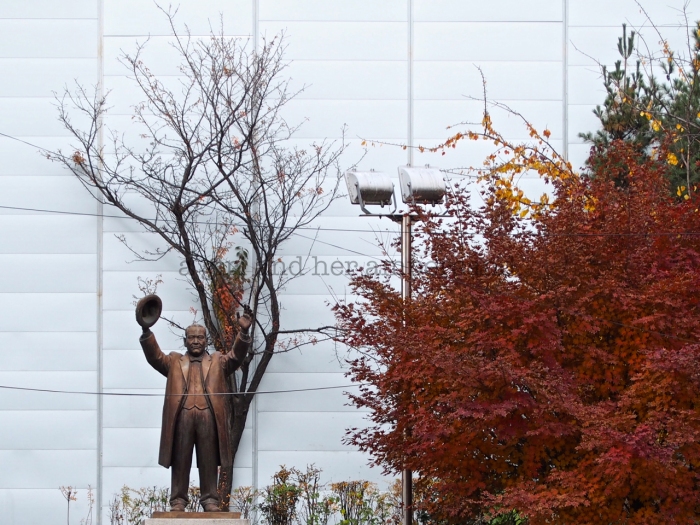 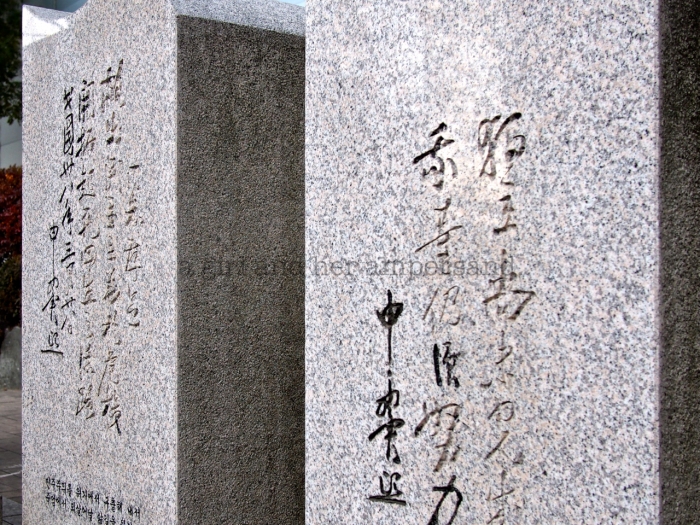 In front of Shin, Cheonho-daero (천호대로) was lined with newish apartment towers, their first floors home to restaurants, convenience stores, a salon supply shop, and other businesses.  Much of the space just off the avenue was occupied by a massive apartment construction site.  An open door leading into the site revealed a temporary office structure made out of shipping containers, on the side of which, in jumbo lettering, some of the project’s stats were listed: 272,145 square meters, 45 floors, 999 units, 179.5-meter height, 704,800 persons. 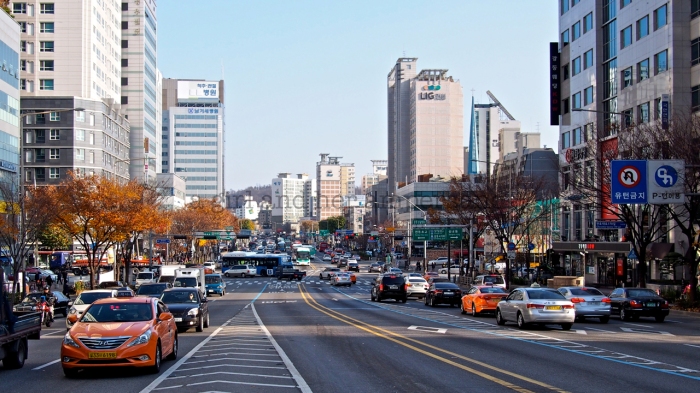 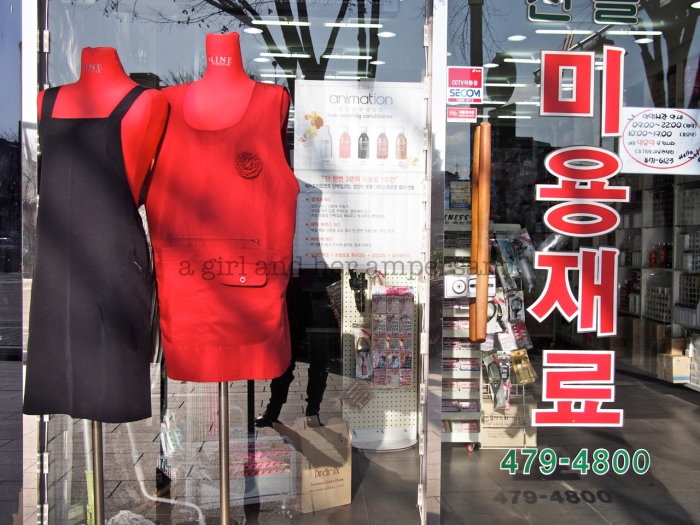 Nearing Cheonho Station, I swung a right on Cheonho-daero-161-gil (천호대로161길), at the end of which, at the intersection with Jinhwangdo-ro (진황도로), were a cluster of motels.  This wasn’t far from the Cheonho Old Intersection (천호구사거리), with its nearby market and red light district, and, in contrast to the main drag, I suddenly found myself in a much older and grittier neighborhood.  There was an old bookshop and a dingy salon, and a few sets of the red and white flags denoting the presence of fortune tellers.  There were also a small Chinese grocer, lamb skewer restaurants, and a handful of other businesses whose signs were in Chinese, not Korean, making me wonder about the presence of a small Chinese or joseon-jok population in the area. 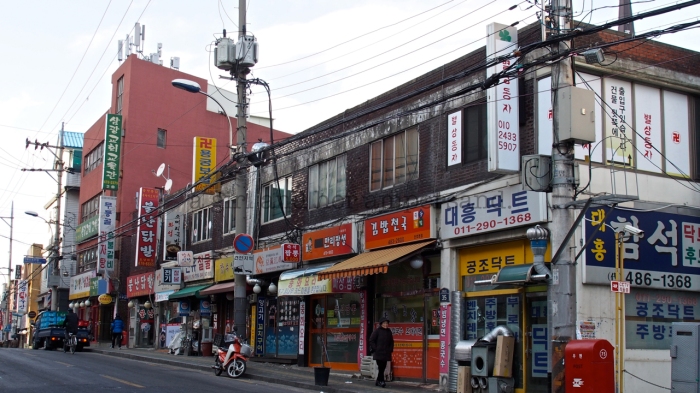 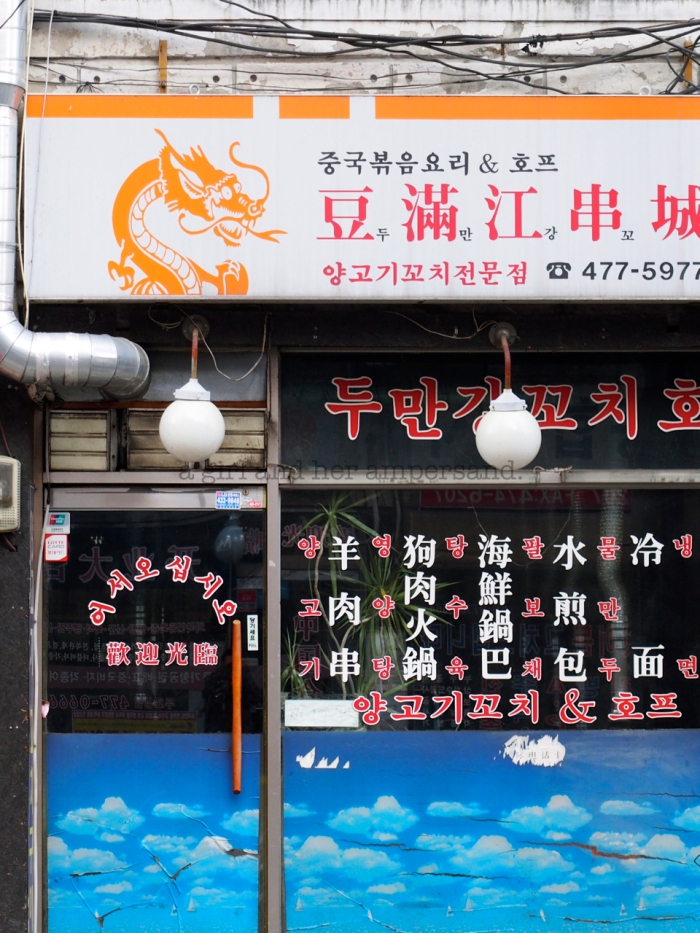 Continuing east on Jinhwangdo-ro, I walked along the towering gray wall on the opposite side of the construction site before turning back toward the station on Seongan-ro (성안로), where, instantly, everything was again newly built or almost built.  Back on the corner of Cheonho-daero, just outside of Exit 2, two more groups of well-dressed men and women were handing out more apartment literature from folding tables, photos of apartment interiors taped onto large pieces of cardboard, and on the opposite corner was one more group.  It was as if whatever real estate officers there were in the neighborhood couldn’t contain all of the new places there were to be bought. 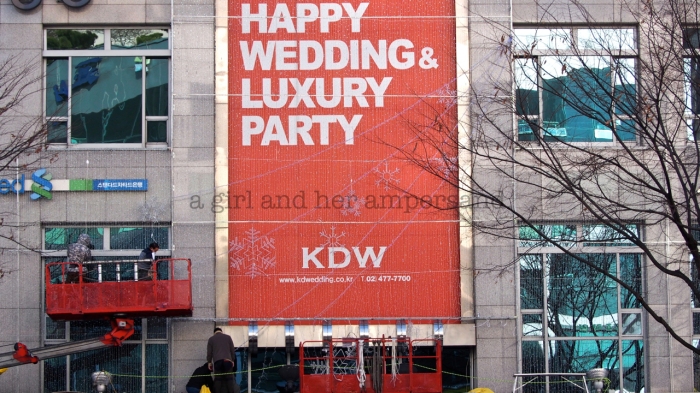 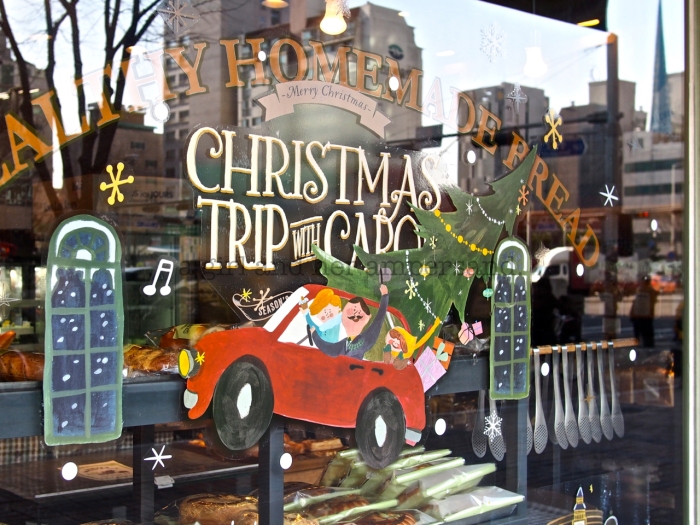 Passing the well-dressed people with the flyers, I walked east for a bit, turned left on Yangjae-daero (양재대로) and then left again, back onto the opposite end of Jinhwangdo-ro, where I could smell the barbecue grilling in the nearby restaurants.  What was most noticeable, however, was the slightly insane profusion of noraebangs, far more than I’d ever seen in one place before.  Within just 200 meters I counted 38, and I probably missed a few.  Many of them advertised doumi (도우미), ‘helpers,’ and just a bit further up the street were more motels.  2+2=…

While the north side of Cheonho-daero was full of new developments, the south side of the street hadn’t seen the same action.  Here the commercial buildings housing chicken joints, rice cake shops, or realtors had the gray or ivory brick façades typical of structures a few decades old.  I wandered the back streets for a bit, through a typical neighborhood where nothing really stood out save a café called King n Kong advertising ‘Coffee n Tofu.’  I don’t even.

Easily, though, the best of the neighborhood can be found via Exit 4.  A left on Cheonho-daero-162-gil (천호대로162길) took me past another tiny Chinese grocer before leading to the Seongnae Traditional Market (성내전통시장), its entrance marked by a new sign that featured an LED display board that just kept flashing red and green variations of ‘성내전통시장.’  The market itself isn’t exactly noteworthy, just a couple blocks of a single street with the usual market sights and smells: bowls of oranges, tanks of shellfish, the smell of sesame oil.  What gives it a bit of distinction is the touch added by the Seongnae Traditional Market Activation Project (성내전통시장 활성화 프로젝트).  A handful of the market’s many stalls have been ornamented with small wooden sandwich boards advertising the business.  Each of the boards has, on its front, a charming hand-painted portrait of the proprietors and, on the back, a cartoon of a boy holding a cabbage or stirring a pot beneath a casually cheerful ‘어서와’ (welcome).  The portraits – of a key maker and shoe repairman, an elderly couple operating a mini-mart, a woman who sells hotteok and runs an interior design business – are remarkably good, done in a realistic style and painted in bright colors that bring out the character and the human element that traditional market boosters are so eager to promote. 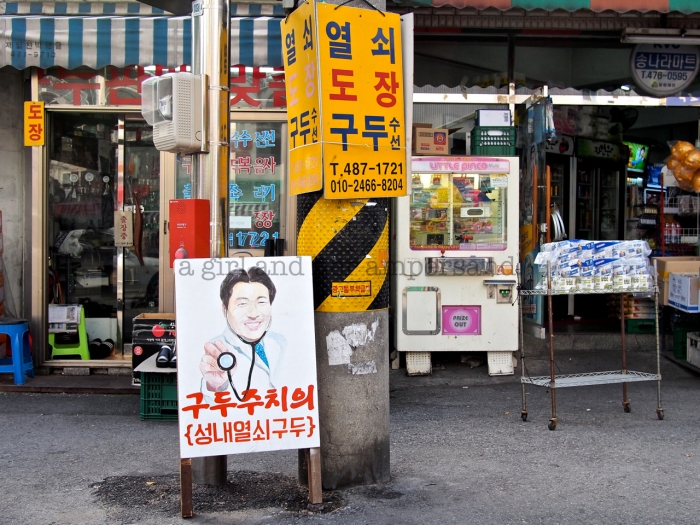 This animated approach to enhancing Seongnae Market may have been inspired by the neighboring Seonganmaeul Kangfull Comics Street (성안마을 강풀만화거리).  The name Kangfull (강풀) probably doesn’t mean much to most non-Koreans, but ask a local and they’ll likely have warm feelings about him.  Kangfull is the pen name of Kang Do-young (강도영), one of the most popular webtoon artists in the country; in addition to his webtoons, which span several genres, Kangfull has drawn children’s picture books, his work has been adapted into several movies, and, according to Wikipedia, he’s signed on as a screenwriter for a prequel to ‘The Host’ (괴물).

The entrance to the Kangfull Comics Street (which is really an entire web of streets running through the neighborhood) is marked by a large drawing of a happy ajeosshi and ajumma on a scooter, below which a sculpture made with bike tires spells out ‘어서와’ (welcome).  As you enter, at Cheonho-daero-164-gil (천호대로164길), on the left you’ll notice a wall map of the neighborhood’s artwork; next to this is a box containing large postcards that lay out a walking tour through the streets and provide titles for each of the 52 murals you’ll come across.  Some of the first are of kids imploring you to be quiet as they sneak up on an unsuspecting friend and neighbors in an apartment building calling out to each other in different languages.

Even with a map, the murals, delightfully, seem to pop out at you in unexpected places.  Turn a corner and you’re greeted with an image of your startled self, reflected back at you by the mirror in a camera lens one of Kangfull’s characters is pointing at you.  Round the bend in a narrow alley and you find yourself surrounded by clouds, a girl sitting contemplatively amidst them on one side of you, a boy climbing up a ladder to reach her on the other.  Other murals demand to be sought out, tucked around corners or down tiny alleys, only rewarding those who actively seek them.  ‘카페 작은별’ (‘Little Star Café’) depicts a whimsical café scene at the end of a long alley, not visible from the street.  ‘붕어빵’ (‘Carp Bread’), showing a vaguely Escher-like drawing of carp transforming into the popular red-bean stuffed bread sold at street stalls, occupies the side of a building halfway down an alley well away from any of the other murals. 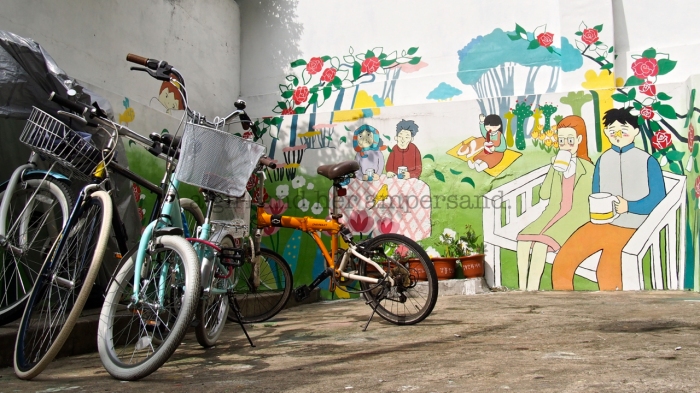 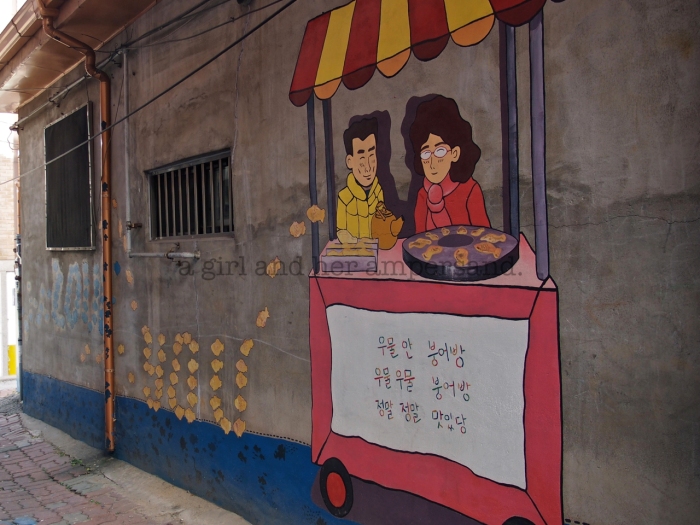 The Kangfull Comics Street is a very recent creation, completed only earlier this year.  And what sets the installations here apart from other similar neighborhood art projects (in Iwha-dong and Gaemi Maeul for example) is their consistent aesthetic.  Although its murals were not actually painted by Kangfull himself – they were a collaboration between volunteers organized by the Gangdong-gu Office and Pingpung Art (핑풍아트) – they mimic Kangfull’s style, with its penchant for earnestness and innocence, as in ‘고백’s (‘Confession’) portrayal of two lovers professing their feelings and ‘우리들의 이야기’s (‘Our Stories’) portraits of people of different ages and different walks of life, their thoughts and worries swirling in different fonts around them, and its tickling embrace of the whimsical: in ‘군봉의 오후’ (‘Gunbong’s Afternoon’), an old guy sits with a coffee and donut, while on the ground in front of him three tires have been painted with frosting and sprinkles. 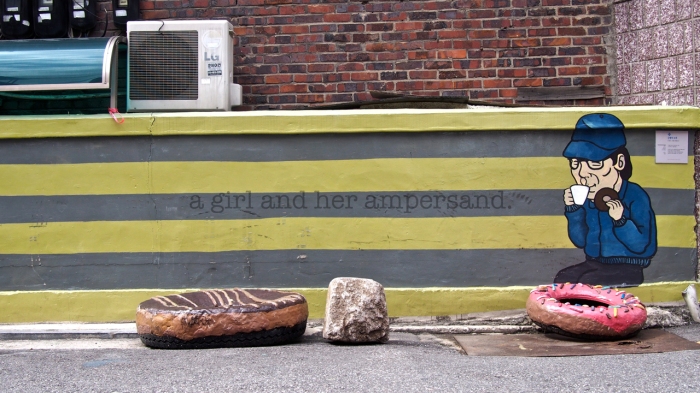 Though Kangfull’s oeuvre encompasses murder mysteries and violent revenge stories, much of his work, and everything that’s on display in Gangdong, focuses on the humanizing acts of the everyday, the small moments that at once allow us to both identify with another person and to see them as completely unique: putting on a tie before going to work, getting on an elevator at the end of a long day, taking off your shoes and announcing you’re home to someone who’s been waiting for you.  The characters in the neighborhood’s drawings have large heads and open, honest faces that seem incapable of deceit or judgment.  Walking down one more alley you came to one of the last murals, ‘얘가 웬일이래?’ (‘What are you doing here!?’), where a family, surprised by your visit, comes out of their house to greet you.  They seem genuinely glad you’re there.