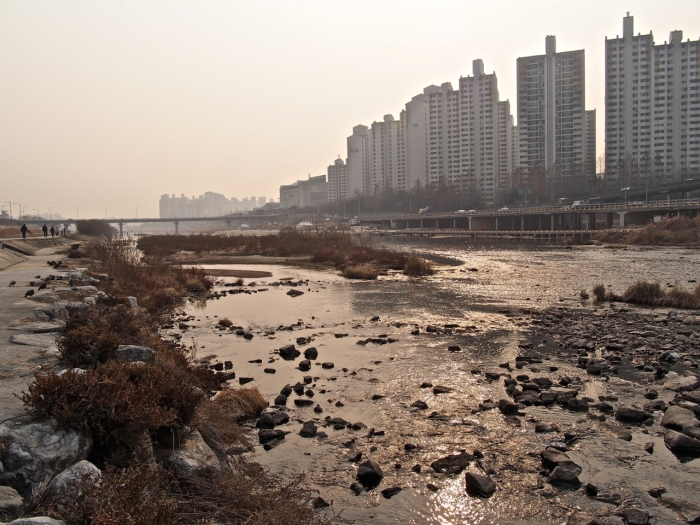 Let’s begin with noodles.  Just outside Exit 1, on the corner of Gongdaecheon-gil (공대천길), is a sign for Gongneung-dong Noodle Street (공릉동 국수 거리).  We often comment on this blog about how much the city changes – the buildings that disappear and are replaced, the neighborhoods that are gentrified – but one change I don’t think we’ve ever really talked about in that context is food.  Janchi guksu (잔치국수) – the name means ‘banquet noodles’ – were for a long time the typical food served at village celebrations, particularly wedding ceremonies, as their length symbolized a wish for the bride and groom to have a long life together.  Through the end of the Joseon dynasty they were considered an extravagance and reserved only for special occasions; an envoy of the Chinese Song dynasty even made note of this, recording in the ‘고려도경,’ that due to the prohibitive cost of wheat flour on the peninsula the noodles couldn’t be eaten if it wasn’t for a special occasion.  Nowadays, of course, janchi guksu costs less than 5,000 won, but the old association still turns up in the expression ‘우리 언제 국수를 먹을 수 있어요?’ – ‘When can we eat noodles?’ – shorthand for ‘When are you gonna get married?’

The sign on the corner explained that in 1980 a place called 원조멸치국수 (Original Myeolchi Guksu) opened in a little 10-square-meter half-basement shop here.  At first the restaurant only served their myeolchi guksu (janchi guksu in an anchovy broth) at night, but because there were many brick factories in the area with a steady stream of laborers looking for a cheap and filling meal the business quickly expanded and now has forty locations across the country.  Those factories are now gone, but Gongneung-dong is home to taxi company offices, meaning plenty of drivers looking for a cheap, quick eat.  As a result many other noodle restaurants have opened up on and off Gongdaecheon-gil to serve them.

If it hadn’t been for the sign at the entrance, I probably wouldn’t have noticed anything particularly noodle-y about the road, however, as the restaurants aren’t grouped all together the way they are on some other specialty food streets.  Walking down it and keeping tally, though, I spotted at least seven places serving janchi or myeolchi guksu, as well as a couple others offering kalguksu or bibimguksu.

After a lunch of the local specialty, I walked north on Dong-il-ro (동일로) from Exit 4.  A busy street full of businesses and restaurants, after about 300 meters it brought me to Gongneung-dong Dokkaebi Market (공릉동 도깨비시장).  Dokkaebis are goblin-like creatures that reward the good and play tricks on the bad.  One way they reward the good is by granting them a wish, but the catch is that any object granted has been stolen from someone else.  Because of this their name is sometimes given to flea markets or markets that just have a bit of everything.  A large arching awning over the front had a cartoon of a dokkaebi with his trusty club and a shopping bag.  Below that a banner advertised supplies for kimjang, the kimchi-making season.

Underneath a high arched ceiling the market was light and airy, clean and well-organized, with each shop having a circular sign the size and shape of a snare drum out front.  True to its name, the market had a bit of everything, split roughly evenly between foodstuffs and non-.  There were butchers, rice cake shops, phone stores, small restaurants, fruit, beauty supplies, and porridge for sale in single-serving Styrofoam bowls.   There was a strong herbal smell that I couldn’t place.  A stereo played a recording of a Korean singer doing ‘Feliz Navidad.’  Outside a kids’ clothing store three coin-operated rides – two cars and a horse – waited for someone to drop in a few hundred won. 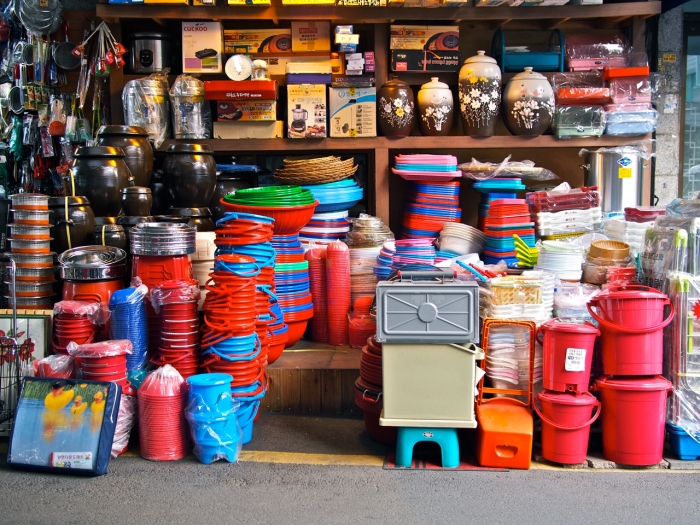 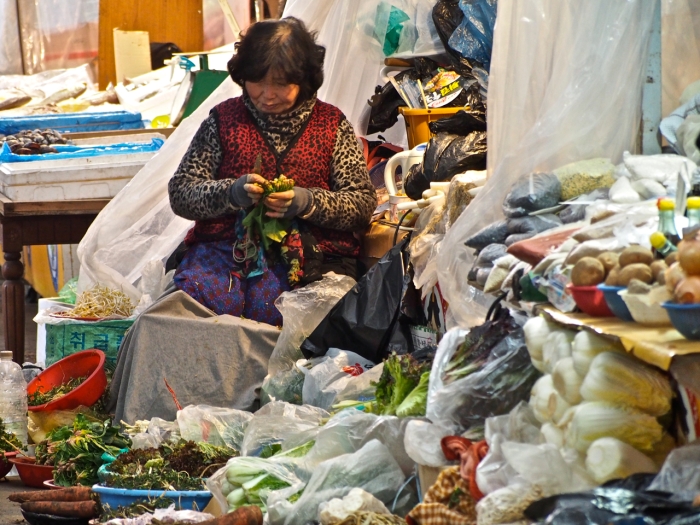 Across Hwarang-ro (화랑로), Taereung’s south side features a couple parks scrunched next to and under the intersection of highways here.

Just outside of Exit 7 is Gangneung Park (강릉공원), pegged in between the street and the Hwarang Stream.  There’s not much here, but whoever designed and installed the park did a respectable job of making what they could out of the little space, sprucing it up with two small ponds, a stone walking path, some playground equipment, and a pair of jangseung, traditional village guardian totems.  At the park’s far end was a rest spot – some benches underneath three wooden shelters – and scattered around it were a dozen or so random, mismatched cushions, mats, and chairs: padded office ones, wooden kitchen ones, and ones without legs designed for sitting on the floor.

Exit 8 drops you off on a small plaza with a pond and bridge, and just behind you as you come out the entrance is a set of stairs leading down to the Hwarang Stream (화랑천).  About ten meters wide and in the shadow of the Bukbu Expressway (북부간선도로), the stream has manmade cascades, bike and walking paths, and thin banks of stone and reeds.  As it flows downstream it slows, creeping around sandbanks. 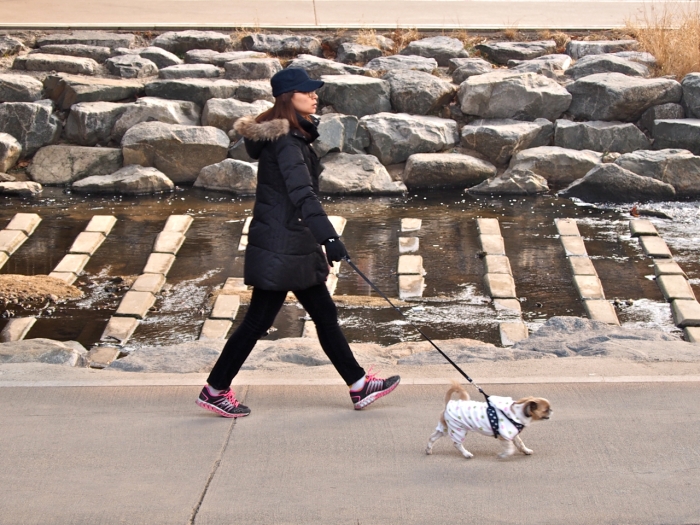 Just before emptying into the Jungnang Stream, the Hwarang passes through what has to be the best worst park name that I know of in Seoul, the bluntly titled Gongneung Highway Park (공릉도로공원).  Lining either side of the stream here are about three dozen spotlights that look like oversized eight balls.  They point towards a fountain in the middle of the stream, and on the near bank in front of this is a set of viewing stands, so in warmer months it’s likely that these things are used for a water and light show.

Via a stepping stone bridge I crossed to the opposite side, where there were several large beds of irises and other flowers that would, I’m sure, be quite lovely in the summer.  For now, though, I had to content myself with the feathery white tops of the thick reed beds nearby.  From this side the walking path along the stream takes visitors to the larger Jungnang Stream (중랑천), which is wide and subject to the noise of the traffic on the multi-lane highways on either side of it.  A few ducks paddled about in the water, and a few seniors sat on benches in the cold, watching them. 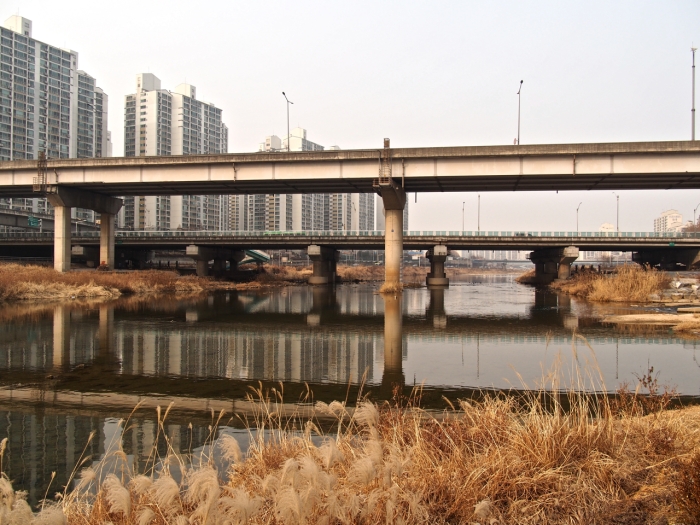