The last stop on Line 6, Bonghwasan Station sits right alongside the Northern Trunk Road (북부간선도로) and there’s a transfer parking lot outside where commuters from Namyangju and Guri can drop their cars before jumping on a train for their jobs in the city.  The sprawling Korean Military School (육군사관학교) lies just north of the station, but the trunk road makes it inaccessible and pretty well prevents pedestrians from getting to anything else save for a little sliver of stream and urban farmland to the northeast.  It was here that I started my visit, taking the first left out Exit 2, and walking down to a bike path along the watercourse.  This wasn’t much, near dry, but it was lined with wildflowers and buzzed over by dragonflies.  After a short ways both the path and the stream ended rather abruptly, though the former continued on the opposite bank, running past the reeds and aquatic bushes that stood exposed in the dried-out stream bed. 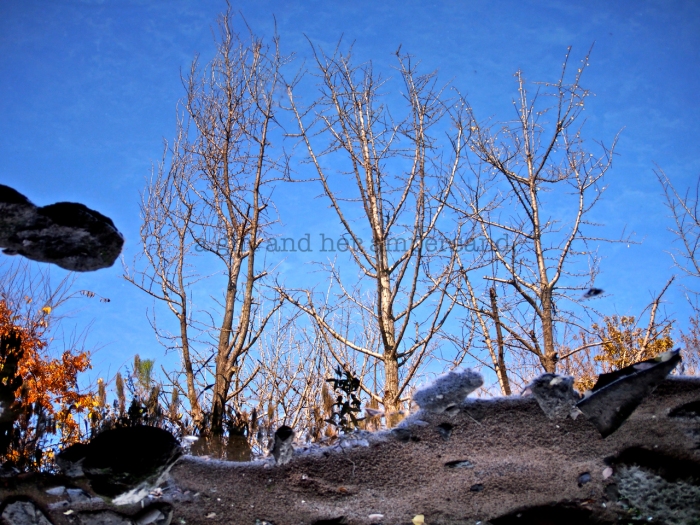 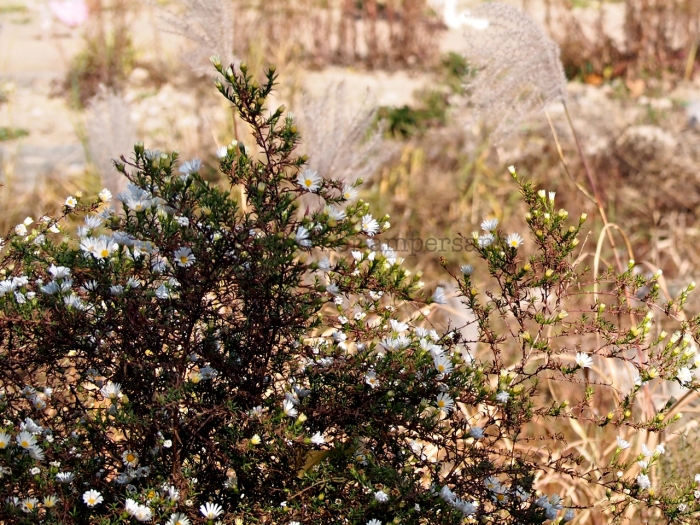 The path led me to a collection of what you could either call very large gardens or very small farms, and here, amid the candid smell of manure, pumpkins, chili peppers, and lettuce grew among two-meter-high cornstalks, dried husks rattling in the wind.  The size of these operations, their sounds and smells reminded me of where I grew up, a town that was too big to rightfully be tagged with that much loved moniker, ‘small town America,’ but that was still infused with the life of the corn and potato and dairy farms surrounding it.  Specifically I was thinking of the pick-your-own-strawberry places a ten-minute drive from home where they’d hand you a basket and let you out into the fields to squat in the foot-wide black earth between rows and pluck fruit to take home.  It wasn’t quite the same, but as I headed back toward the main road I passed a place selling blueberries and fruit saplings and something called black-choco-berries. 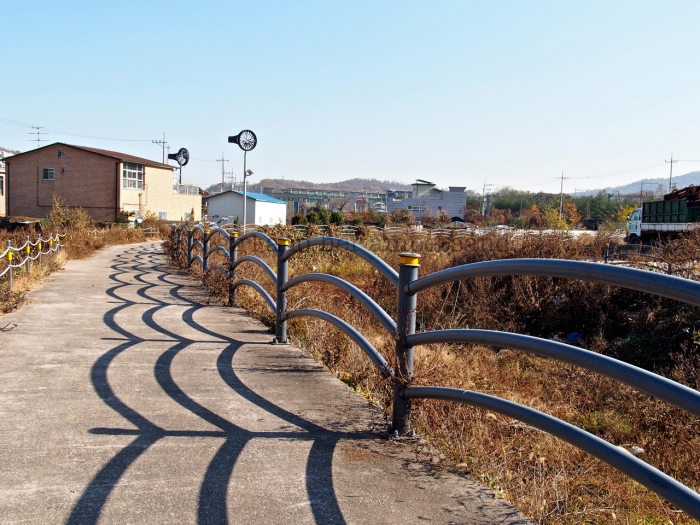 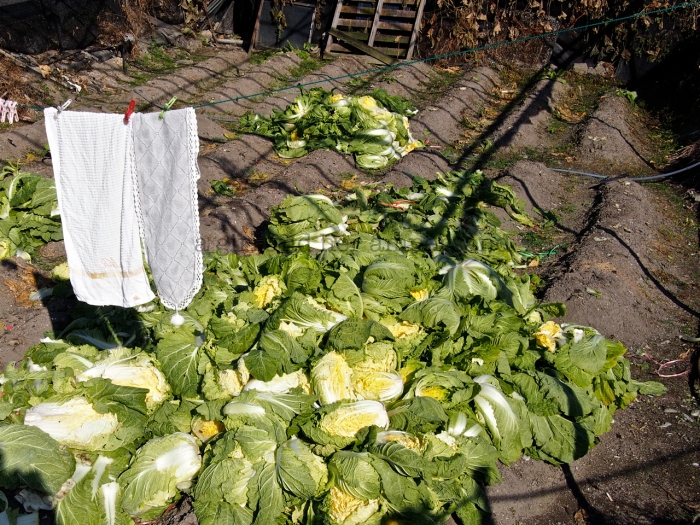 Bonghwasan was quiet in a Seoul sort of way, which is to say that traffic noise was the only noise, no blaring K-pop, no loud arguments, no announcements about a sale or a new store pouring out of speakers.  I’d taken a left on Sukseonongju-ro (숙선옹주로) from Exit 5, and from somewhere I could hear the regular pinging of an aluminum bat on a baseball, as regular as a metronome, a sure sign that somewhere batting practice was taking place.  This was broken only by the electric chime of a school ‘bell’ signaling that classes were over for the day.

Although the main road by Bonghwasan Station, Sinnae-ro (신내로), is lined on the south side by commercial buildings – a HomePlus, banks, restaurants, eyeglasses shops – the neighborhood behind it is all apartment complexes and schools, any action mostly limited to kids running around and old guys playing jangi, Korean chess, in apartment courtyards.

Better to skip the neighborhood and head straight for Sinnae-dong Neighborhood Park and Bonghwa Mountain (신내동근린공원 – 봉화산), a straight shot down Sinnae-ro-21-gil (신내로21길) from Exit 4.  The park, which encompasses the mountain, is huge, enough so that a road leads into it.  (The park can also easily be accessed from Meokgol (먹골역) and Junghwa Stations (중화역).)  On my way in I passed people playing badminton in a plaza space, kids on playground equipment, an old woman out for a walk, an ajeosshi on a bench reading the paper, some teenagers playing basketball, a family set up for the day in a large tent, and a woman on a sit up bench, mostly just lying there while her two small dogs waited with their leashes tied to the base of the bench. 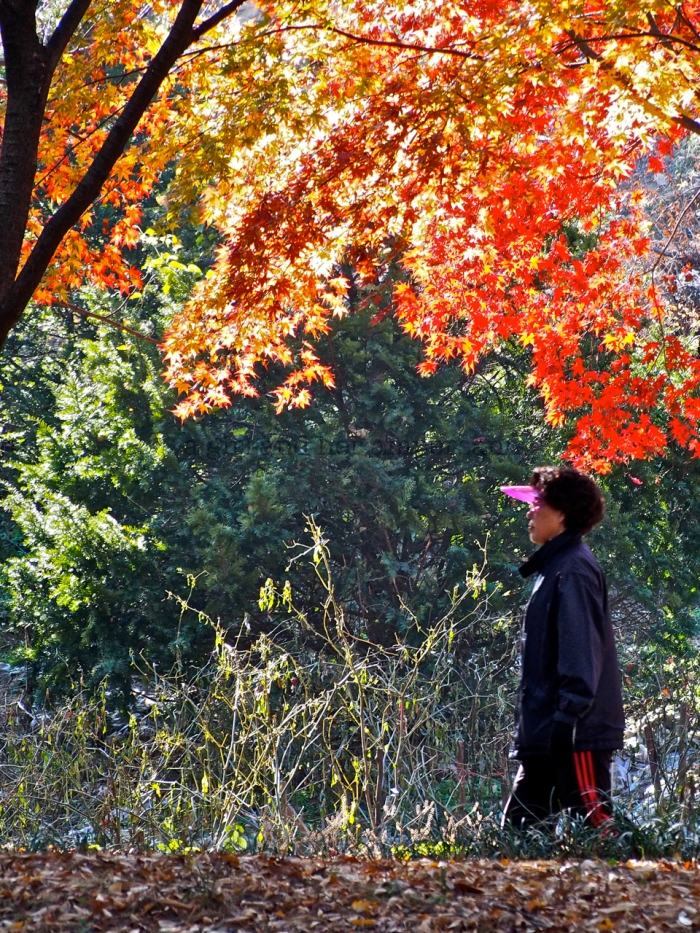 With magpies cawing in the trees I followed the main drive further in to where it angled off and went uphill to a gymnasium.  To the left was a large vegetable garden that had small silver bells strung up in rows above the plants, the bells spaced at ten-foot intervals.  I had never seen this sort of thing before and wondered as to its purpose.  My best guess was that it was used to keep birds away, that if a magpie or sparrow perched on a line in order to survey the bounty below the bells would ring and scare it away.  I passed the garden and walked up to the gymnasium, and when I came back down all the bells suddenly rang out.  The entire network of lines seemed to be connected so that any disturbance would set the whole carillon to chiming.  There was, however, no sign of any bird or anything else that would have triggered things.  Then, almost as suddenly as they’d started, the bells stopped, not gradually fading out as you’d expect they would, but simply stopping, like that.  I looked around for a few moments to try to figure out the cause, but there didn’t seem to be anything.

Closer to the entrance, signs near the main road point to an entrance to the path up the mountain, which starts just inside the playground area to the right.  At the trailhead there were several picnic table restaurants where middle-agers were sitting in the breeze generated by several giant fans, sipping soju or makkeolli.  From there the trail continued up, wending between vegetable patches where white tags with the names of owners on them hung from trees and plants and the tangy smell of decomposing produce sat in the air.  The plots were mostly empty except for one old guy up near the top who was tending to his patch with a hoe.

The vegetable patches gave way to the wooded slopes of Bonghwasan, which were shady and cool.  After climbing for a bit the path leveled out, then climbed again, and I passed by a few other hikers before arriving at a raised earthen platform with a mound of rocks piled on top.  A small stele in front read 목동봉화산성황당 (Mokdong Bonghwa Mountain Prosperity Site).

Perhaps it was because I showed up over the Chuseok holiday period, but there were a lot more people on the mountain than I expected, and their numbers only grew the further up I went.  Perhaps fifty or a hundred meters from the peak there was a large collection of exercise equipment, far more serious than what you typically see in Seoul parks, including around a dozen sets of free weights.  Most of the equipment was rusted to some extent or another, but it was finding plenty of use.  There were maybe thirty people there working out or acting at working out, mostly guys over 50, and the place brought to mind a Korean retirement home version of Muscle Beach.  One guy was doing curls in front of a mirror that leaned up against a tree, another, dressed in slacks and a polo, shadow boxed, and someone else was doing ‘bench presses,’ taking the bar down maybe ten centimeters, and that’s being generous. 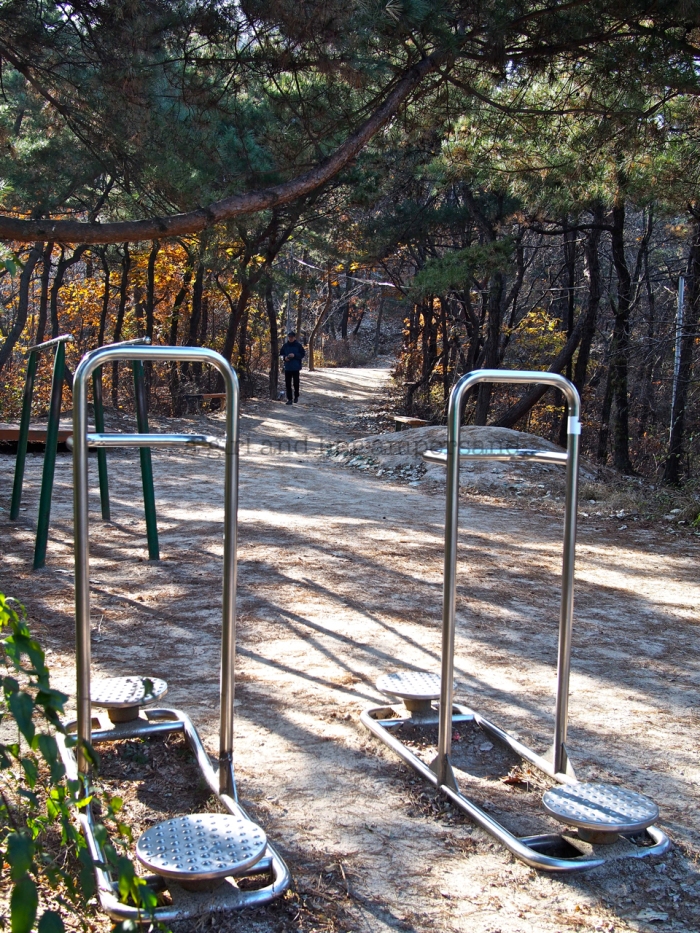 Shortly after the workout area and just before the final steps up to the peak, old men were gathered around a handful of Go tables, either playing or watching.  Instead of continuing straight to the peak, if you turn left here a path leads to a small traditional-style building, painted in the familiar burgundy.  When I visited it was closed and locked, but peering through the gap between the doors I could see a simple wooden shrine built around the bust of a pale woman wrapped in white cloth and wearing a peaked white hat.  This is Sanshingak Shrine (산신각), where the Bonghwasan Dodang Goot (봉화산 도당굿), a shamanistic ritual and Seoul Intangible Cultural Property No. 34, is performed on the third day of the third lunar month every year. 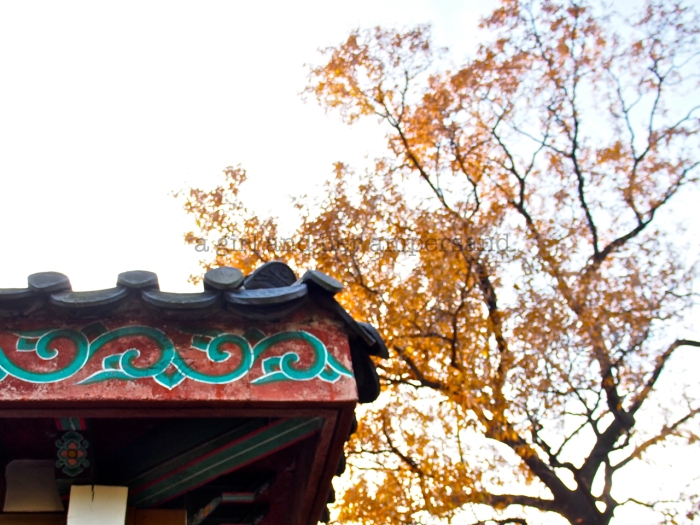 Finally reaching the peak I was treated to an utterly kick-ass view of the city.  Dead ahead was Namsan and N Seoul Tower, and the entire swath of Seoul between lay spread out before me, a topography of apartments and towers and highways and streams and inner-city mountains.

The significance of this view wasn’t lost on the Seoulites of old.  ‘Bonghwa’ means ‘signal fire, and the peak served as a link in the Joseon period’s chain of mountaintop beacons, relaying warnings up and down the peninsula.  This particular one, the Acha Mountain Region Signal Fire Site (아차산 봉수대 터), is recognized as Seoul Monument No. 15 and is so named because Bonghwa belongs to one of Acha Mountain’s ridges.  According to the on-site plaque, the beacon here was the final one built in what was the first of these signal fire networks and it picked up signals from Gyeongheung, Hamgyeong-do (in what is now North Korea), Gangwon-do, and Pocheon, Gyeonggi-do, and relayed them to Mongmyeok Mountain, what is today known as Namsan.

The original structure is of course long gone, but a 1994 reproduction has been built in its stead, a two-tiered cylindrical stone chimney that looks something like a telescoping igloo.  At the base is a rectangular opening where wood could be placed to burn inside the chimney.  As I was standing in front of the structure taking notes a young kid bent down and started to crawl inside before coming back out laughing and saying ‘Makkeolli;’ some jerkwads had taken it upon themselves to toss their empty bottles and other trash inside.

A moment after the young kid had crawled out of the chimney a twenty- or thirty-something guy in a sleeveless t-shirt and headphones came charging up the dozen or so steps that led up to the signal tower platform, the highest point on the mountain, and collapsed onto the ground, flat on his back.  He’d apparently run up from the base, all 138 meters.