Exits 4 and 5 at Sinbanghwa Station are closed off; they lead toward the huge expanse of land between here and Yangcheon Hyanggyo and Balsan that is in the process of being developed into a massive new complex of high-rise apartments and retail spaces.  I first emerged from Exit 6 instead, where there was a tall fence of white metal running along the sidewalk, bearing the same digital renderings of the space’s future that I had seen in Balsan.  Gaps in the fence where trucks could drive in and out revealed maybe two dozen cranes standing over empty pits and cement mixers and dump trucks moving about through the massive construction site. 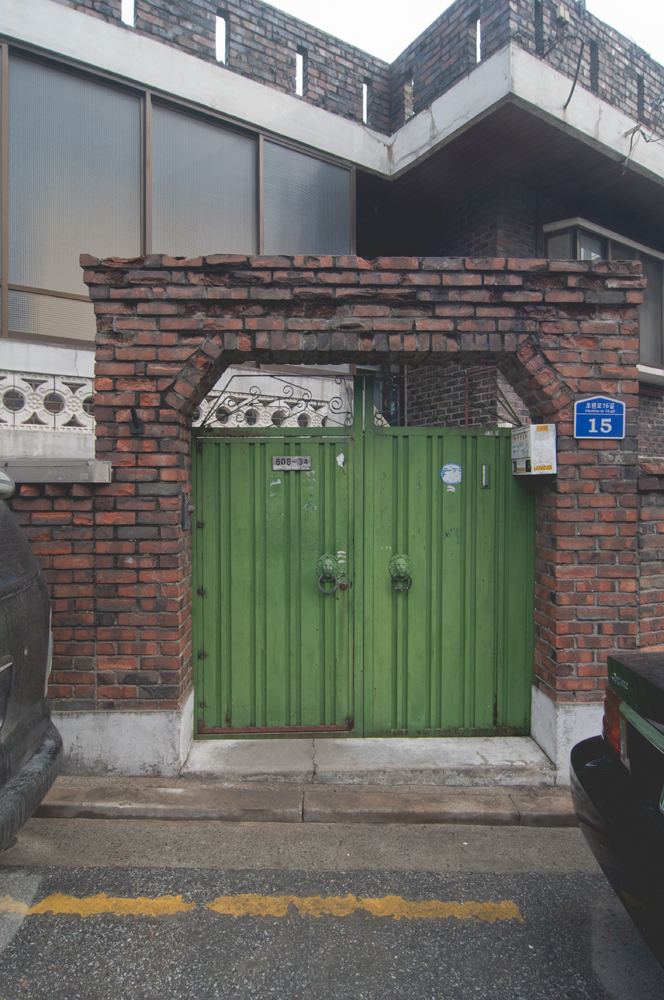 With nothing to see on the east side of the station I crossed Banghwa-dae-ro (방화대로) to the west.  Some ajeosshis in a parking lot on the corner were eating and having a drink al fresco, and a trio of teenagers dug through the ice cream freezer outside of a neighborhood mart, but really there was next to nothing going on here too.  The area was fine, but utterly nondescript – red brick apartment buildings and a few daycare centers and small businesses.

I cut back to Chowon-ro (초원로) outside Exit 8 to see if anything was more interesting over there, and when I reached the intersection with Banghwa-dong-ro (방화동로) things livened up a little – there were a few simple restaurants and some rather old school pubs and dabang – but ultimately I’d been in the neighborhood about all of twenty minutes when I started to feel that, OK, I got the point.  The most interesting thing I came across was on the north side of Chowon-ro: a small trampoline bang for kids called Sky Bangbang (스카이 방방).  Apparently this is a thing, something I’d never heard of before, but already the frontrunner in my 2013 Universal Championship of Awesome.  Aiding its cause is the photo on the door that the business chose to advertise with: Two girls dressed in all pink are up front mugging for the camera, the one to the right throwing up the standard V-sign while the one in the center is inadvertently flipping off everyone behind her, including one very serious looking boy holding a toy semi-automatic.

Back at the station I swung by Exit 2 to check out Gindeung Children’s Park (긴등어린이공원) that the station map had noted to be just outside the exit.  It was about the size of a studio apartment.  There was a tiny play set, a couple swings, a seat made to look like a fire engine on a spring that rocked back and forth, and a sign asking people not to drink in the park.  And that was it.

And that was pretty much it for the neighborhood.  Um…OK, I’m done.