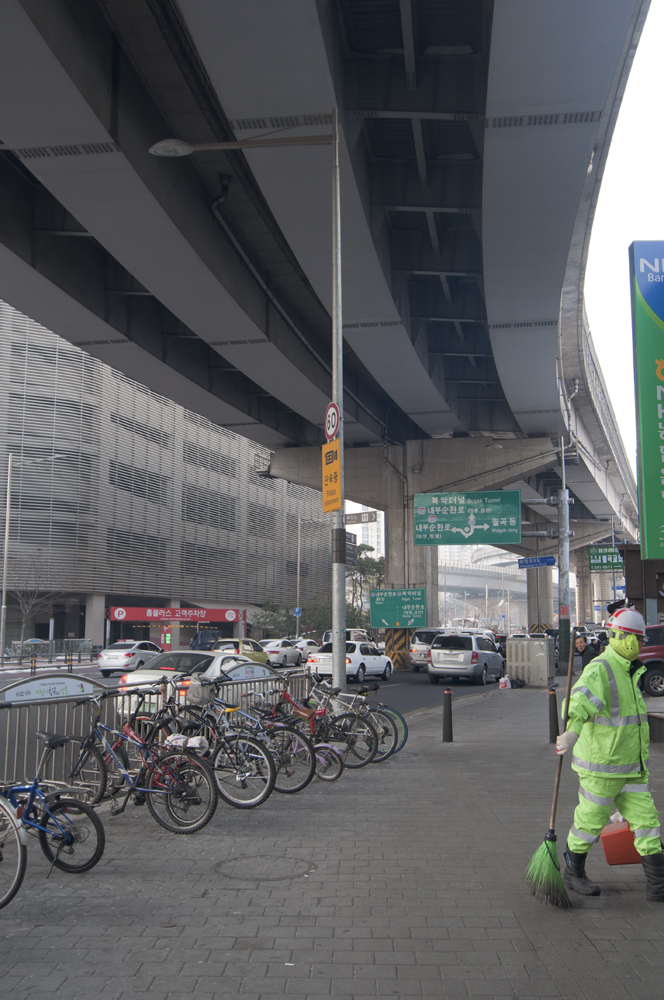 The heavy canopy of Bukbu Expressway (북부간선도로) curved along overhead, while underneath, the Hwarang-ro (화랑로) sidewalks were coated in a thick layer of ice thanks to a slurry-like snow that thousands of footsteps had pounded into an undulating rink, leaving everyone on this afternoon shuffling along like wary geriatrics. 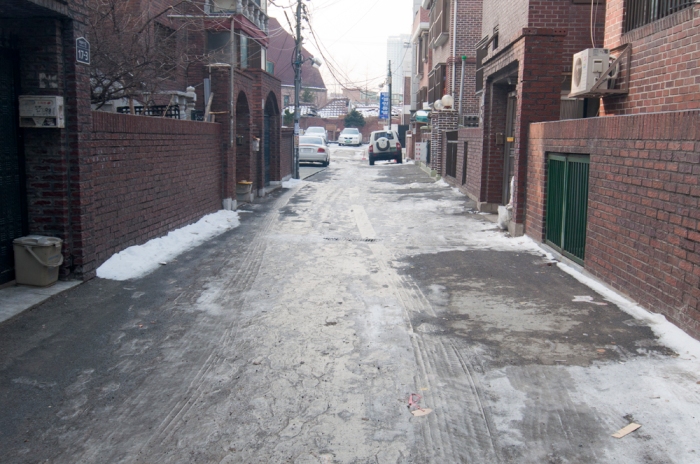 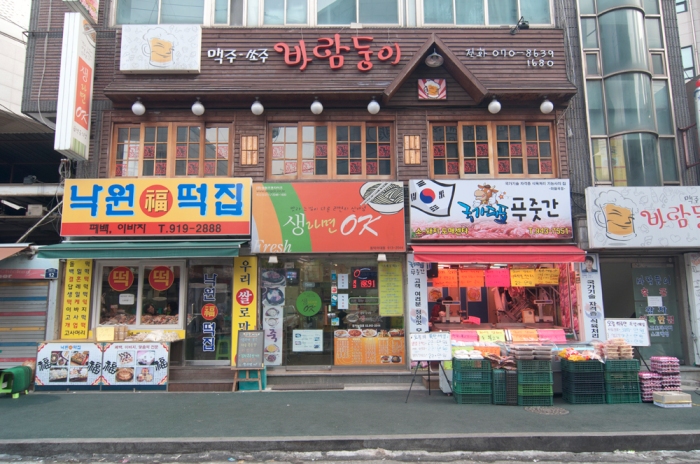 Things were only marginally less hazardous on the backstreets, where the same precipitation hadn’t been pressurized quite so thoroughly.  I skidded out of Exit 3, U-turning and then turning right onto Hwarang-ro-11-gil (화랑로11길) (just as easily reached by doing the same thing out of Exit 2), in the general direction of Dongduk Women’s University.  The road was a pleasant one-lane street that was a mix of old and new – ddeok shops and butchers, salons and cafes – with touches of college neighborhood quirk: a statue of a man reading a paper on a sidewalk bench and, just behind him, a bubble tea café called Bee!! that used John Lennon’s ‘Yellow Submarine’ likeness for a logo. 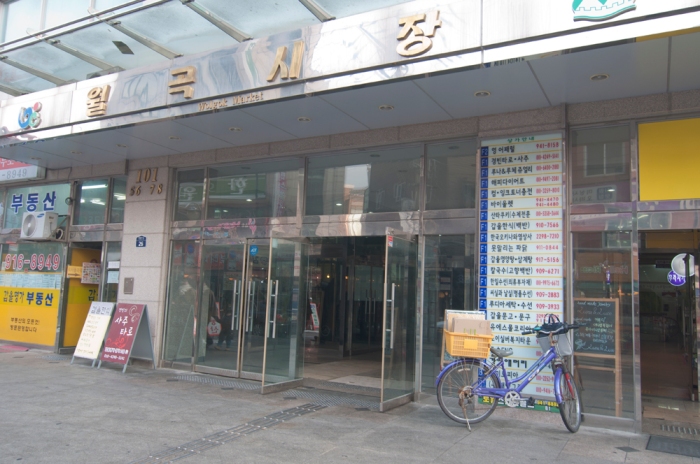 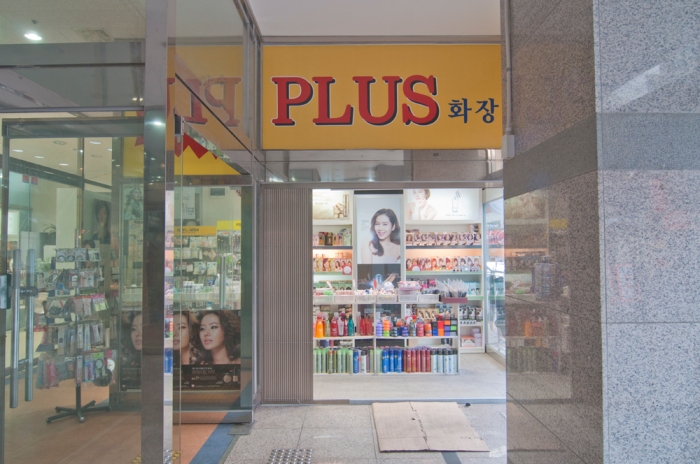 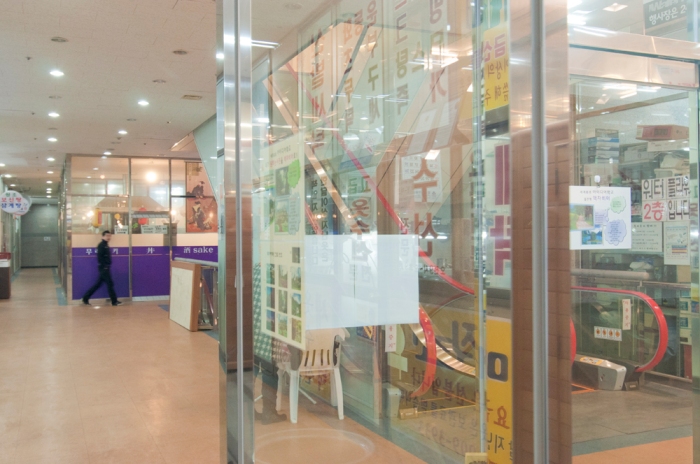 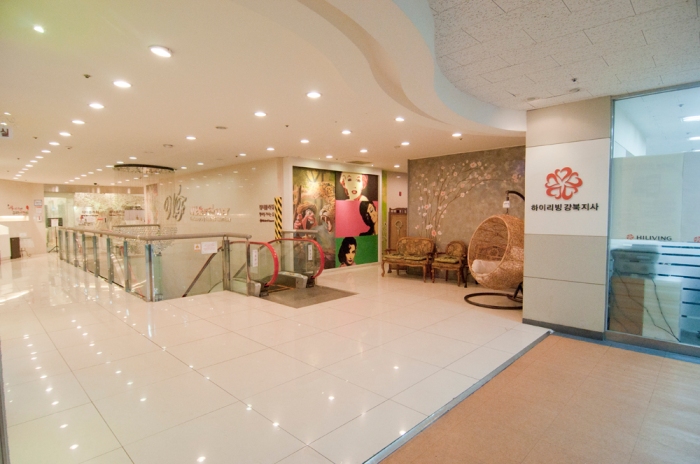 The station’s area map had mentioned a Wolgok Market (월곡시장) that I spent several minutes confusedly looking for – It should be right…here – before figuring out that I had been looking for the wrong thing.  Instead of a typical neighborhood wet market the Wolgok one, just after newspaper man, was not really a market at all, but a modern, multi-floor building.  There were tailors (several), a Japanese restaurant, a store selling infra-red home saunas, and, upstairs, a ‘luxury party event hall.’  It was awfully quiet. 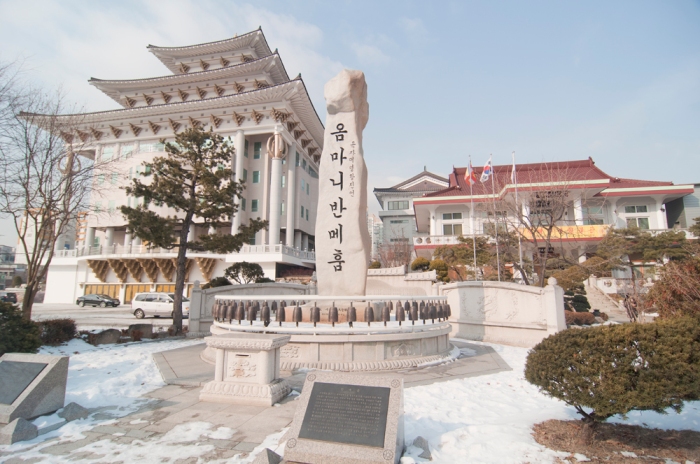 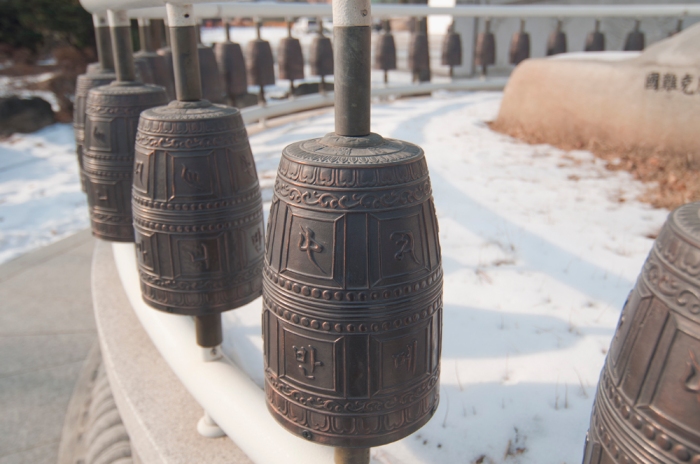 After leaving the market, I continued on Hwarang-ro-11-gil away from the station before coming to a small intersection.  To my left was the very visible Daehanbulgyo Jingakjong (대한불교진각종).  The headquarters of the Jingakjong Buddhist sect was a huge white building with gold window screens on its upper floors and a golden stupa crowning its top.  On poles out front a trio of flags flapped in the breeze: Korean, Buddhist, and Jingakjong banner. 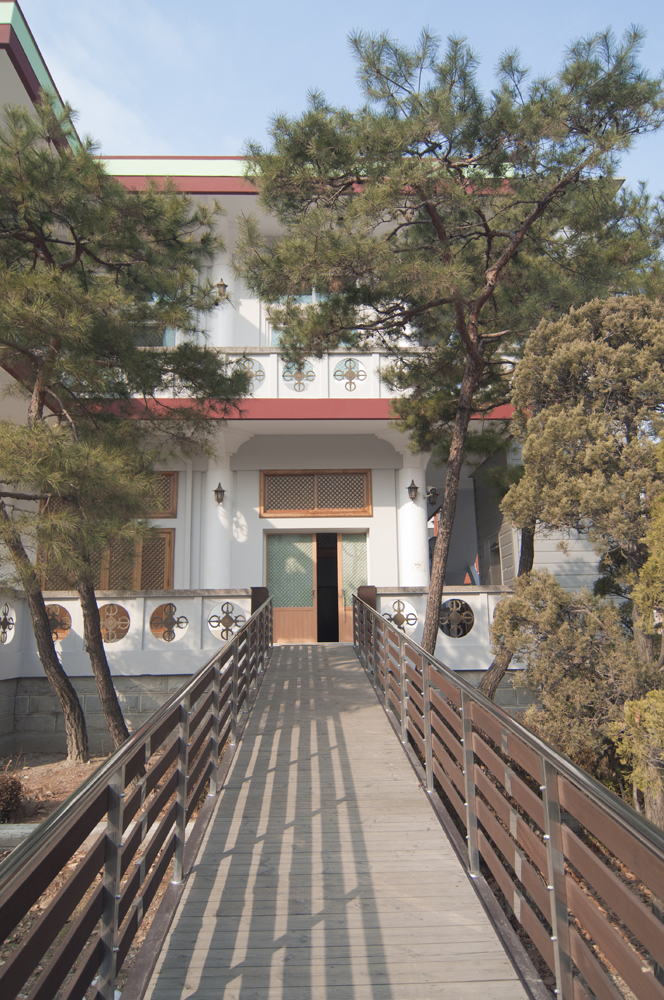 Jingakjong, founded in 1951, is a relatively minor Buddhist sect, and a few things set it apart.  Perhaps the most notable is that in a Jingakjong temple you will find no statues of Buddha; veneration is instead directed at six letters – 옴마니반메훔 – that form a mantra and that are carved onto a large stone pillar in front of the sect’s headquarters here.  Another significant difference is that Jingakjong monks neither shave their heads nor dress in the austere grays typical of peninsular monks and nuns, donning instead gold and brown robes. 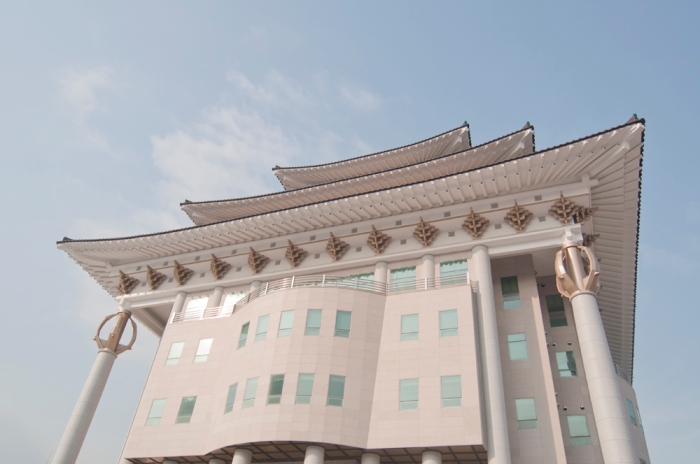 The sect’s headquarters is a fairly new construction, having gone up within the past five years or so right next to its older, simpler home, and it struck me as an odd thing, more apropos to a cult than a strain of Buddhism.  Its middle section was anonymous light stone and windows and wouldn’t have felt out of place in an office park, but its upper stories, in their white and gold, looked to me like what Asian Scientologists might come up with.  This was all accented with the building’s main pillars, which at their upper reaches had pincer-like sections that resembled the claw in street-side claw games. 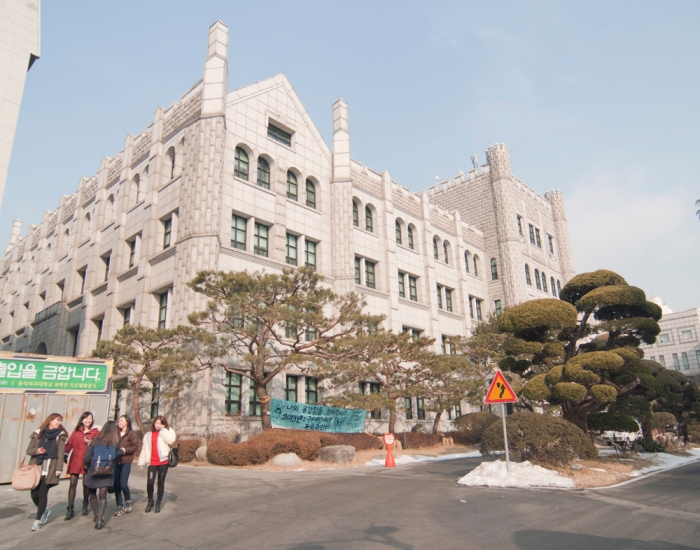 From the Jingakjong headquarters I continued up Hwarang-ro-13-gil (화랑로13길) to Dongduk Women’s University (동덕여자대학교).  Upon reaching the front gate, however, the security ajeosshi asked me what I was doing and when I responded that I just wanted to have a look around campus he refused to let me in.  Wherever there’s a 정문, though, there’s a 후문.  I turned around, walked back to Hwarang-ro-11-gil, hung a left, took the next left, walked uphill for a bit, and then sure enough, there was the back gate.  There was a smaller security guard booth here too, but the ajeosshi in this one couldn’t be bothered to pull his attention away from his TV set.

Somewhat interestingly – OK, maybe a lot interestingly if you’re a dude – Dongduk is home to Korea’s first university major in modeling (for which you can take a course in ‘professional walking’), which may go some way to explaining security’s attempt to keep me out as I’m sure that distinction attracts less chivalrous men than myself.  Me?  I was much more interested in the fact that the college also offers the country’s sole major in curatorial studies.  Unfortunately, there weren’t any models…um, excuse me, curators to be seen, as the campus was largely empty in the middle of winter vacation. 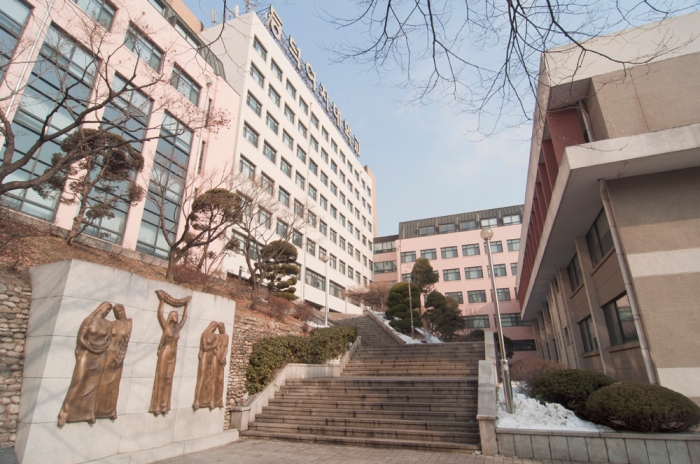 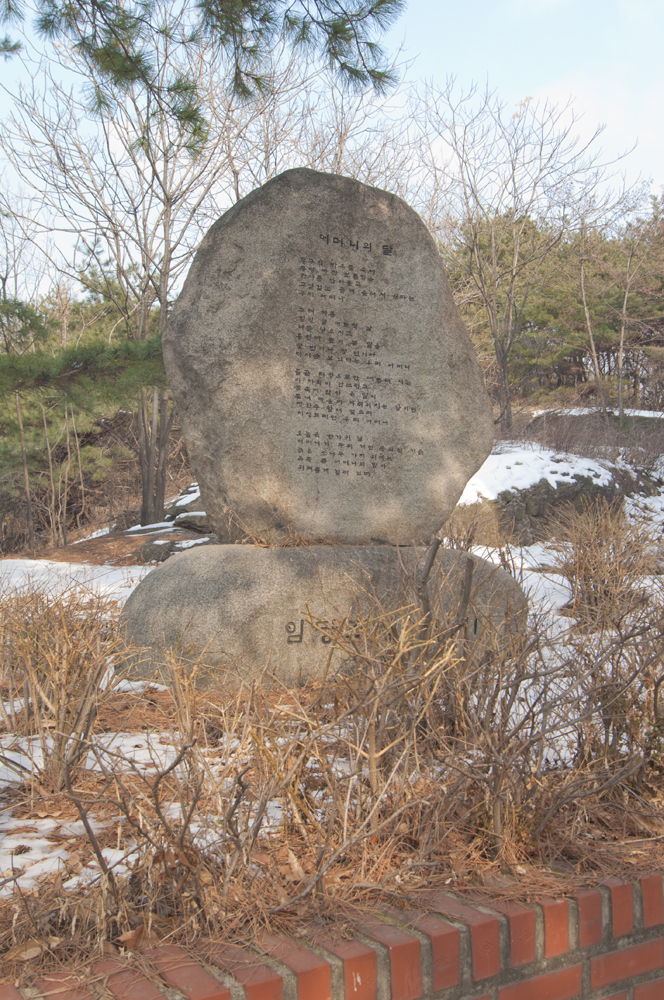 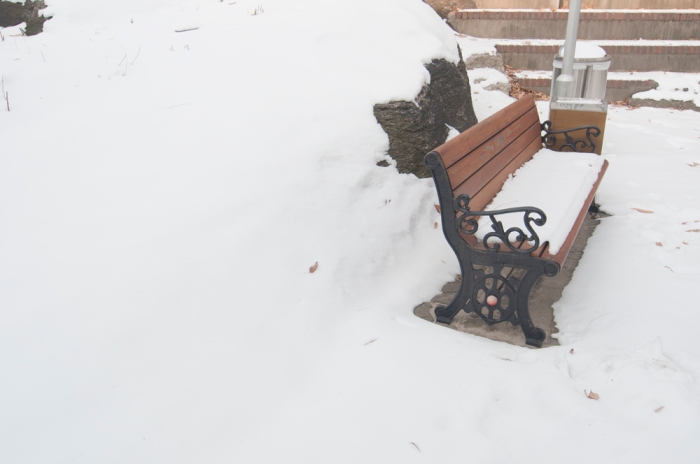 Like a lot of campuses in Seoul, Dongduk has one rather grand looking Main Hall (본관) of gray stone and is otherwise populated with functional but rather bland classroom buildings.  The campus climbs up a hillside from the main gate, and it was as I was making my way to a small park at the very back that the ice finally got the better of me and I found myself sprawled on my backside.  After picking myself up and dusting myself off I (a bit more cautiously now) made it up to the park, which offered views of the surrounding neighborhood and held a stone plaque engraved with a poem, the title of which I wrote down in my notebook as ‘어머니의 달’ (‘Mother’s Moon’) but which was probably actually ‘어머니의 딸’ (‘Mother’s Daughter’).  Anybody out there who goes to Dongduk who can clear that up for me?

From the park I walked back down past the Main Hall and then straight out the front gate.  The security ajeosshi clearly saw me, but said nothing. 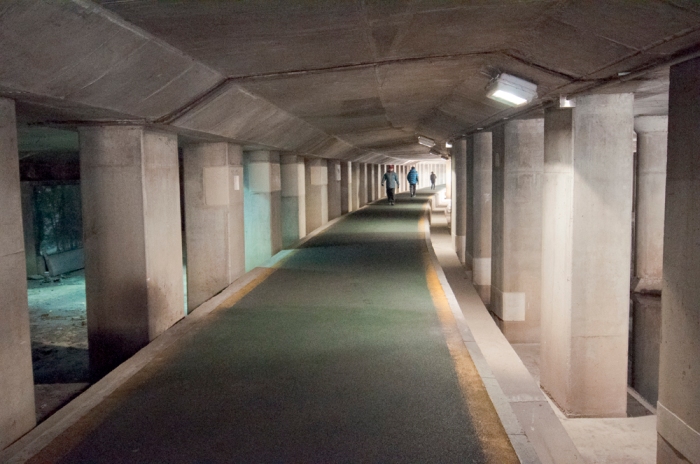 Back at the station, near Exit 1 the elevated highway of Bukbu Expressway (북부간선도로) met with that of Naebu-sunhwan-ro (내부순환로) and ran together above the Jeongneung Stream (정릉천).  The streambed was wide, but the watercourse was narrow, perhaps only two meters.  On either side of it were rock beds, and a meandering green walking path followed the stream from several feet above.  Close to where the two freeways nearly merged, a cascade of water tumbled down a wall of stone blocks into a pool that was channeled into the stream.  The water wasn’t heated, but in the frigid December air vapor drifted up like steam, and the pool looked rather seductively like a hot spring. 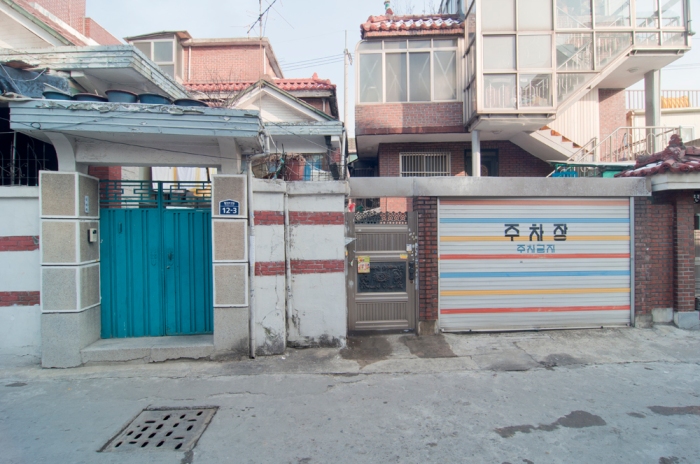 While the side of the neighborhood to the west of the station had seen a fair bit of recent development – stream, HomePlus, new apartment buildings – the side to the east, out Exit 4 or 5, was much older – old red brick apartments huddled around narrow streets.  Kids in the alleys threw snowballs onto a rooftop, and water that had dripped out of a rooftop drainpipe was frozen in a little nub on the sidewalk.  Bordering the neighborhood on its far side was the campus of the Korean Institute of Science and Technology (KIST) (한국과학기술연구원), its pretty, snow-dusted, and lightly wooded hill separated from the road by a black wrought iron fence. 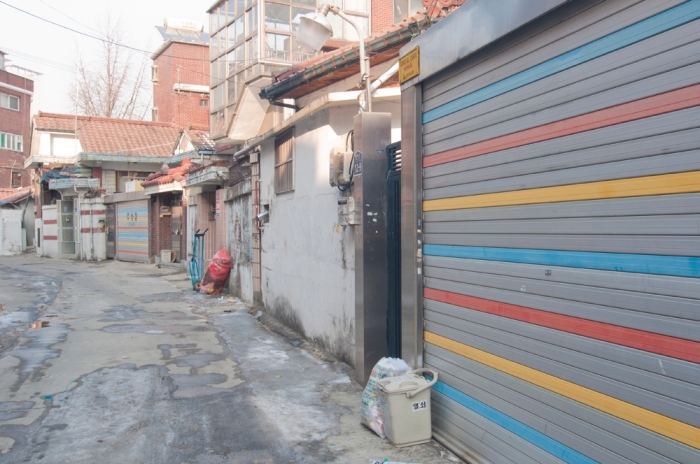 As I made to head back to the station from the road abutting KIST, I ventured to do so down an alley that began with about a ten-meter stretch pitched at a 30-degree angle.  A brick wall ran along one side and I braced myself against it as I inched downwards before successfully reaching the point where the alley leveled out.  At the bottom, going the other way, was a mailman on a delivery moped calculating his chances of going up the incline I’d just come down.  About three seconds later I heard a slight crash and turned around.  Sure enough, the moped’s narrow wheels had slid out from under the bike on the ice, and now the mailman was half-pinned under it, struggling to get out without the aid of any traction.  Another passerby and I hustled over and helped pick the bike up, and the mailman climbed out from under, unhurt, and re-deposited the spilled mail in the front basket.  When I was sure everything was OK I continued back to the station.  Slowly. 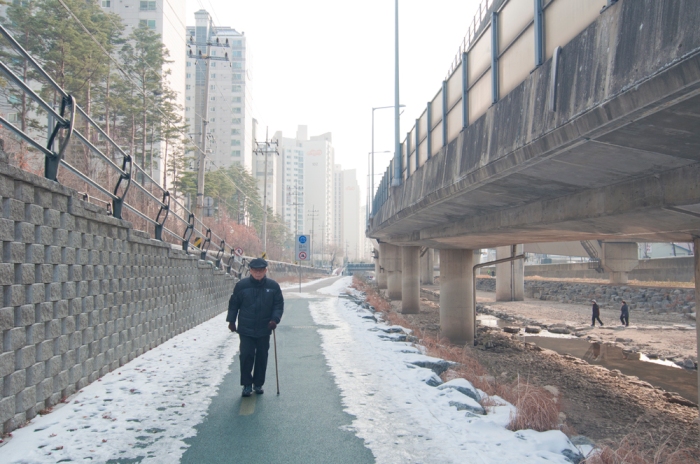 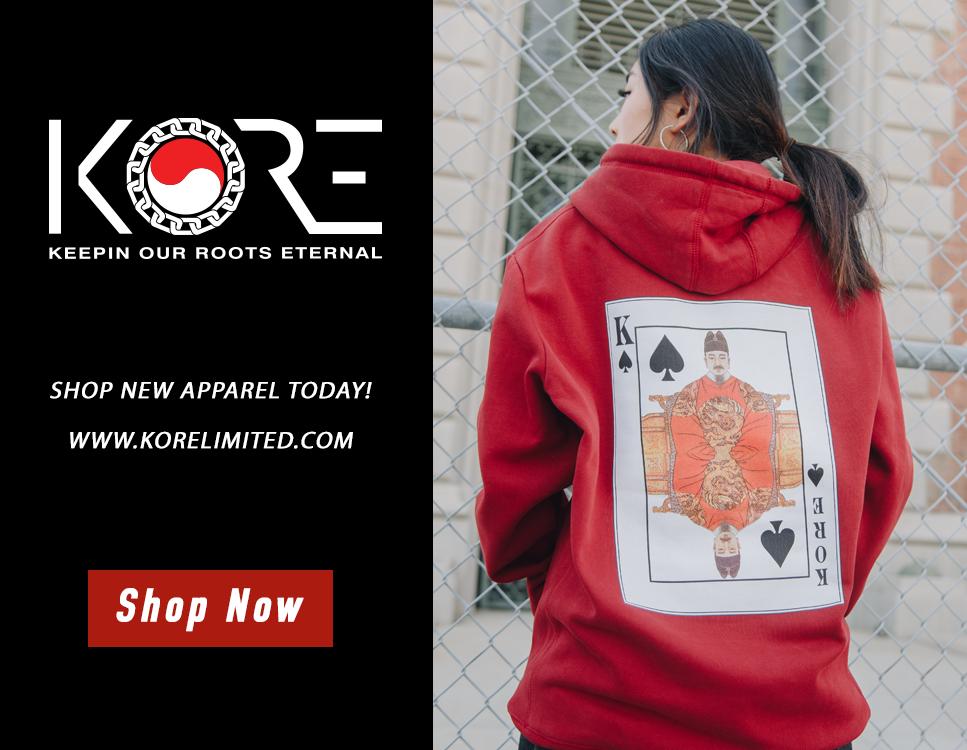