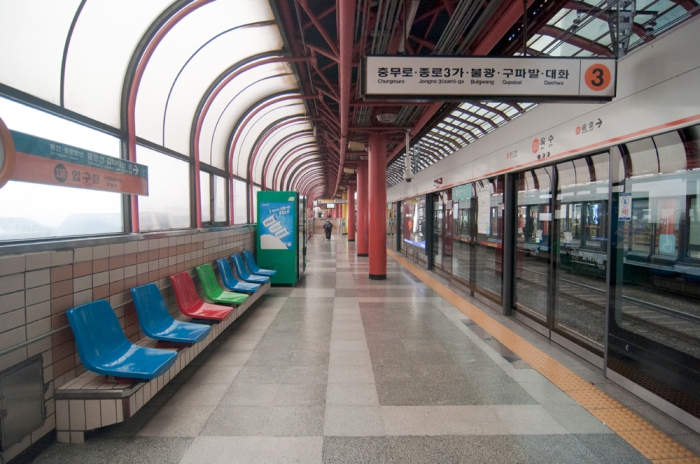 Sitting on the north bank of the Han, just across from Apgujeong, the area around Oksu Station has none of the cross-water district’s glam, though it’s not without its charms.  The west side of the station had relatively little that caught my eye, but it seems as though the neighborhood has undergone a fair amount of gentrification in recent years, with new apartments and churches populating this hilly area, along with new generation businesses like pie shops and combination clothing/toy stores that I noticed. 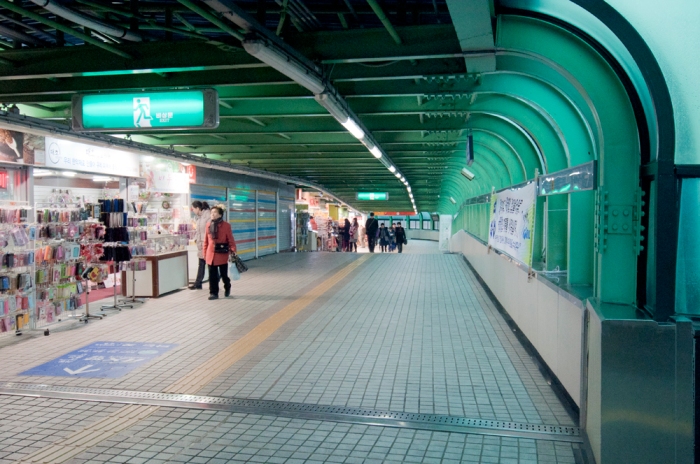 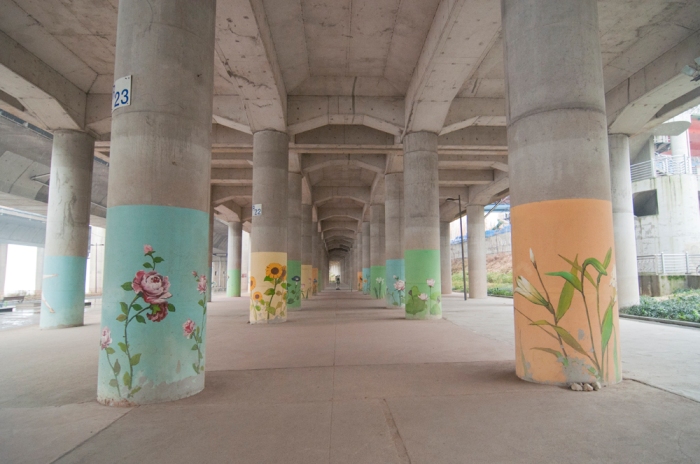 The most interesting things here were south and east of the station, and we’ll start with the tiny sliver of Hangang Park (한강공원) that lies between the ITX tracks and the river.  Out an exit that’s not numbered but marked instead as 한강공원방면, a staircase descends to a thin section of the riverine park that’s largely shaded by the elevated highway and rail tracks that cut through the green caterpillar-like tube of the ITX station.  The pillars of the latter were decorated with paintings of flowers and of athletes ice skating, skiing, playing volleyball, and more.  The exercise equipment among the pillars was also decorated with cherry blossom designs. 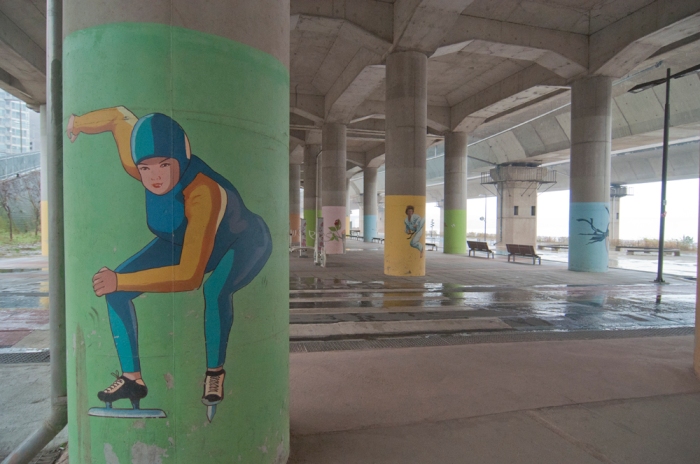 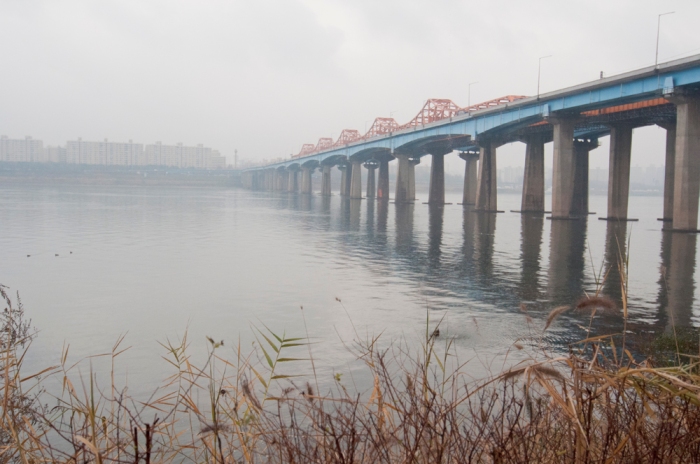 Sunlight sparkled on the river as it crawled through its nearly 90-degree left-hand turn, while traffic passed overhead on the trisected Dongho Bridge (동호대교), vehicles on the outer two sections, Line 3 trains on the inner one, all held up by thick concrete legs that cut the midday sunlight and threw shadows across the water like a copse of trees.  On the banks were benches and bike lanes, which were being used by riders bundled up against the cold.  A bit to the east were some basketball courts, and past those, near some sandy banks where the Jungnang Stream (중랑천) empties into the Han, some boys were using the plaza between a small stage and some covered seating for a baseball game.

[Hi folks. Meagan here. As you can see, the day I visited Oksu was overcast and gray, a far cry from the bright, beautiful day Charlie documented. Please forgive the discrepancy.] 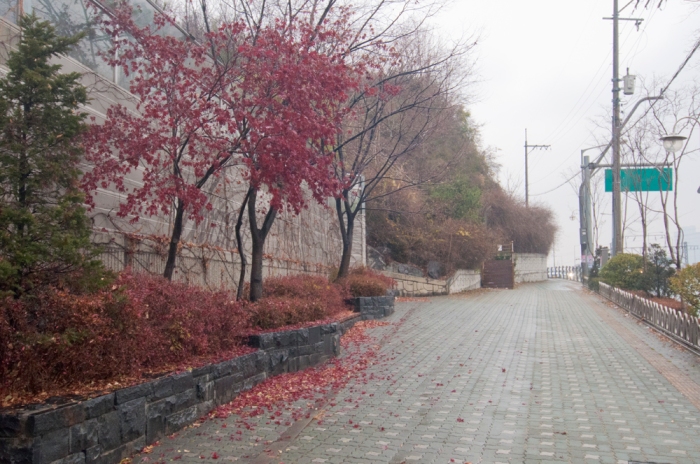 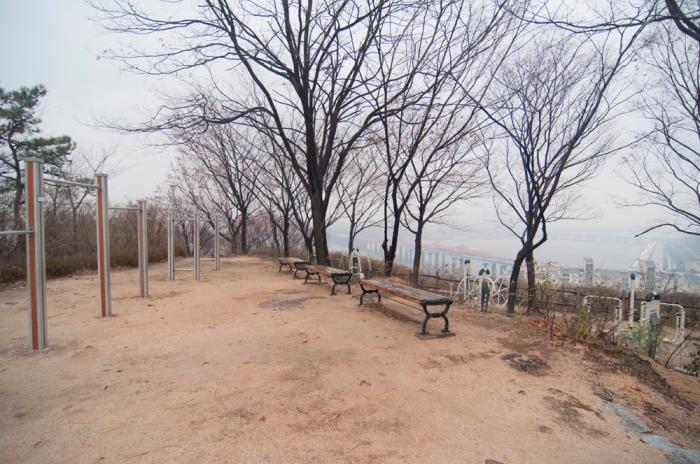 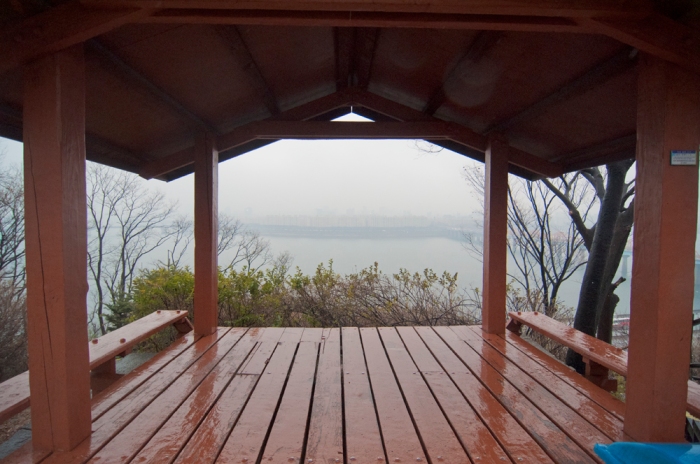 North of the park, and easily arrived at if you go out Exit 4, turn left and walk along Ttukseom-ro (뚝섬로), is Dalmaji Neighborhood Park (달맞이근린공원).  This terraced park occupies a hill between apartment buildings, with several small spots for badminton courts and exercise equipment and a small square with playground equipment and picnic tables at the park’s rear.  And in fact it would make a pretty decent spot for a picnic, as it seemed fairly quiet (There was only one other old man in the park when I went, on a Saturday afternoon.) and it offers good views over the river and the east-central part of town. 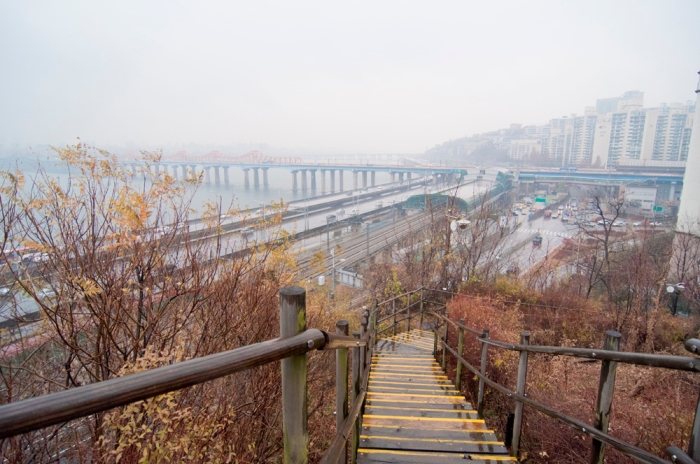 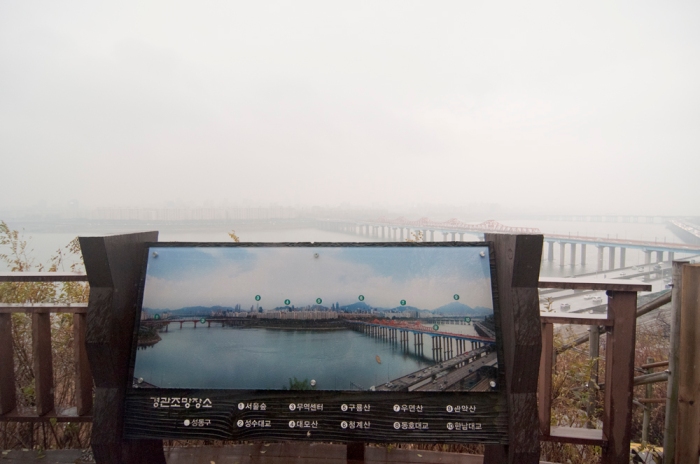 Coming from the station, the set of stairs leading into the park first brings you to Prospect Point (조망명소).  The most noticeable building visible from the point is the World Trade Center (무역센터) at COEX, and you can also make out Seoul Forest (서울숲), Cheonggye Mountain (청계산), and Gwanak Mountain (관악산).  Or, as I did, you might simply watch a hawk circle above the traffic curving around on the Gangbyeon Highway (강변북로) and listen to its loud whsssh, occasionally interspersed with the ticking of trains as they roll into and out of the station below. 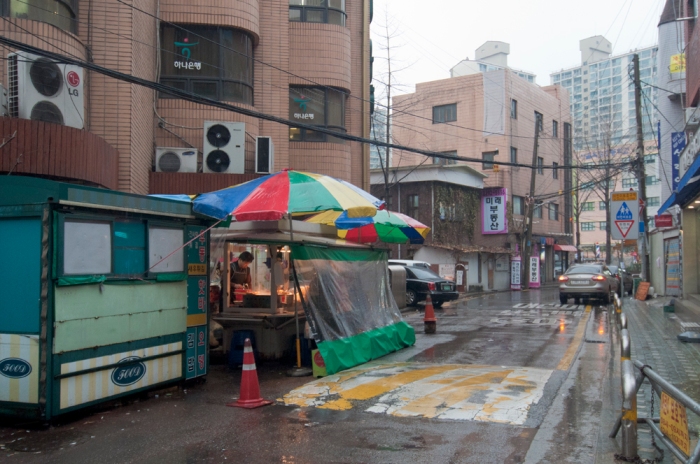 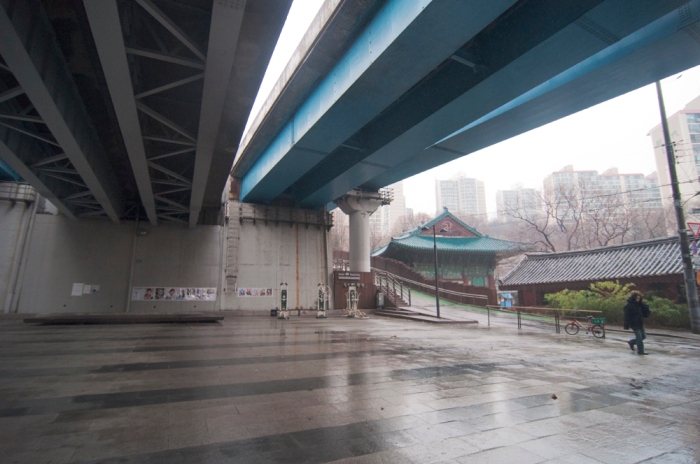 Back at the station, or, rather, underneath it, is Oksu Station Square (옥수역 광장), a plaza with a small stage and what looked to be a fountain, though it was off for the winter. 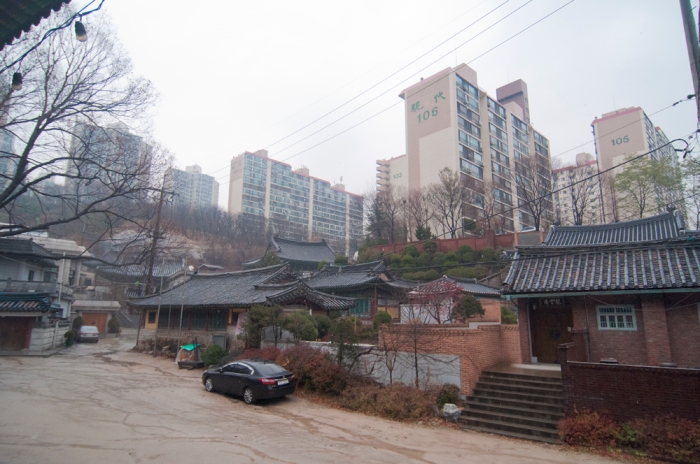 Just north of the square, and across the street from Exit 7 is Mata Temple (마타사), resting just below the elevated Line 3 tracks.  According to the plaque on the temple site, the temple was founded in 888 by the nun Daewon in what is now Keumho-dong (금호동), just north of here, before being moved to its present location in 1115.  For 900 years it’s served as a monastery for Buddhist nuns, periodically having new structures erected, the most recent being a 1988 addition for laypersons and students. 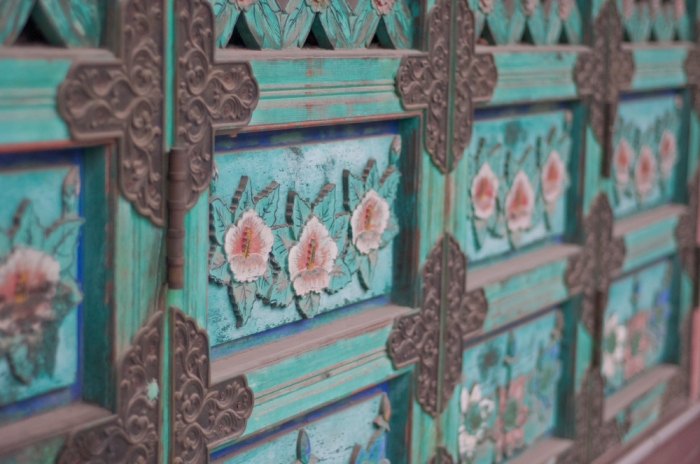 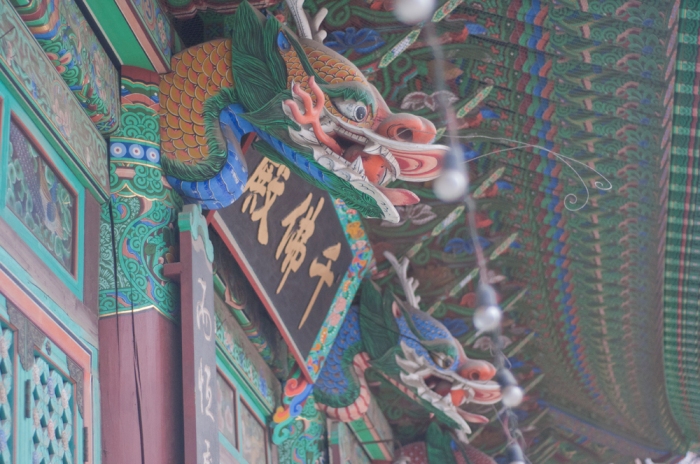 The hall closest to the entrance had pairs of dragon heads on either side of its door, and behind it was a small oven with a narrow red brick chimney and a small altar with an urn on top.  Occasionally a breeze would kick up and the chimney and altar would be showered in red, gold, and brown leaves from the trees above.  One of these was a protected Zelkova serrata, 20 meters tall and estimated to be 230 years old. 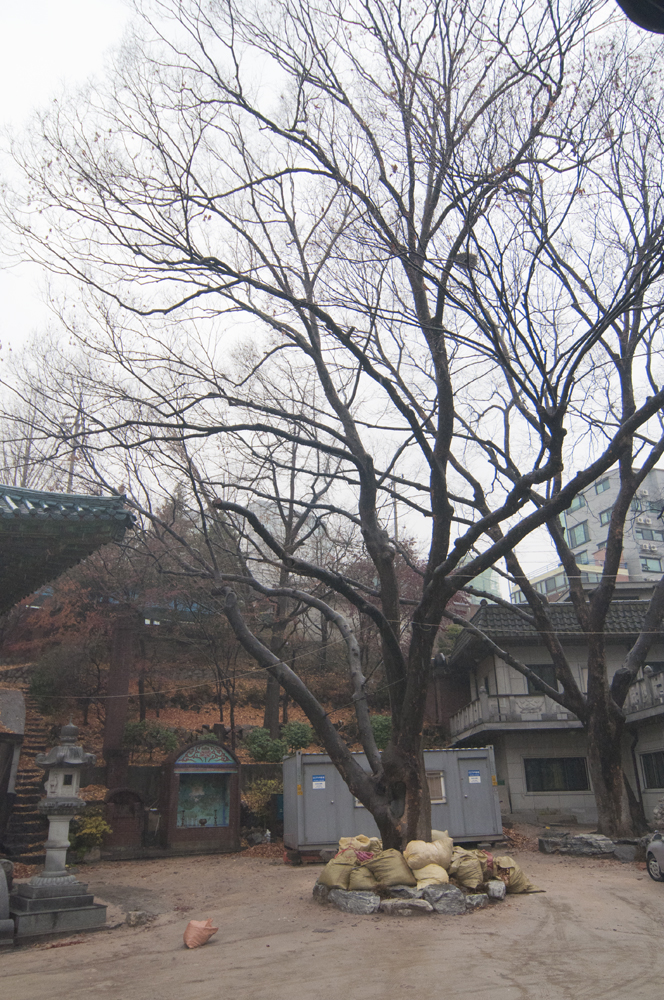 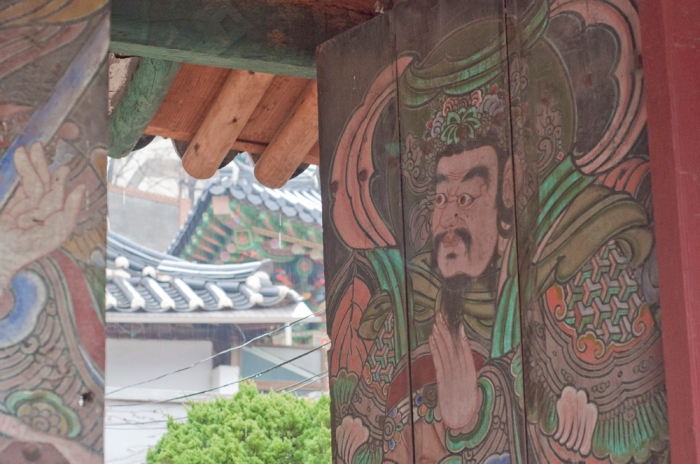 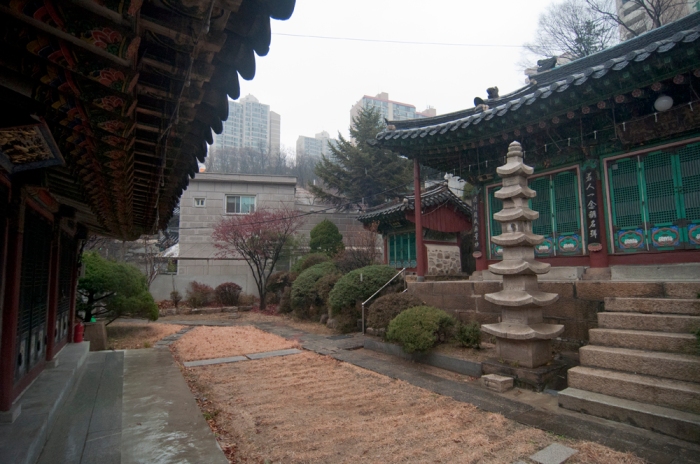 Opposite the first hall was a pair of doors with door guardians painted on them.  These were much less fierce than the usual representations; their swords were at rest and there was a calmness in their gaze, unlike their usual aggressive, wild-eyed brethren.  Beyond the doors was a stone pagoda in a courtyard between two smaller halls, and next to one of these was a diminutive shrine.  A shelf ran around three of the shrine’s inner walls, ceramic candle holders and urns for joss sticks flanking a glass box.  Inside the glass box a small figure was seated cross-legged on a pillow.  I didn’t know whom he represented, but whoever he was, he was considerably more hip than your usual Buddhist figure, with a rakish moustache and goatee, and even a little soul patch tucked beneath his lower lip. 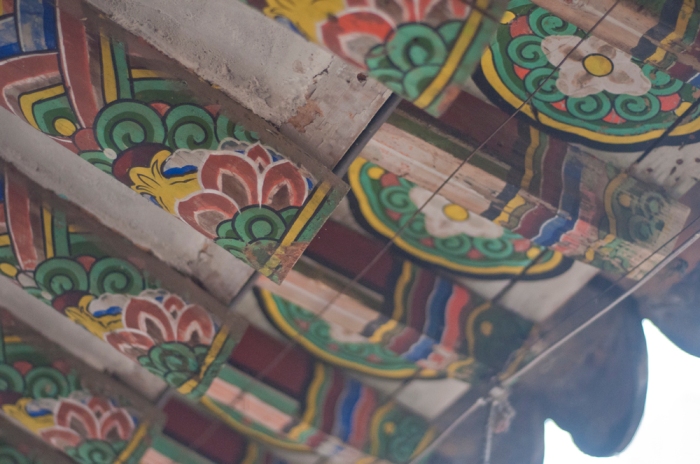