The neighborhood map at Ujangsan Station says that Ujangsan Park (우장산공원) is accessible via Exit 1, but this is deceptive.  I went out that way, past old women selling green onions and chestnuts on the sidewalk, and followed the road as it ran past apartment complexes.  It wasn’t going anywhere, or more specifically it was going straight to Balsan Station, where I’d just come from, so I decided to head east on Gangseo-ro-46-gil (강서로46길), the first right after the exit, and up into the apartments to see if I could reach the park that way.  Kids were getting out from elementary school, being picked up in vans to go to music lessons, or walking home in twos and threes, pausing to pick up leaves off the ground.  One deliveryboy and his Pizza Hut scooter passed by, towing another deliveryboy and his Pizza Hut scooter, apparently broken down, via a harness jury-rigged from red plastic twine.

There was no route to the park, though, so I walked back to the station to try my luck from Exit 2.  Turning left out of the exit onto Uhyeon-ro (우현로), I walked past apartments to my left, and a large construction site to my right, where nine yellow cranes were in the process of building more apartments. 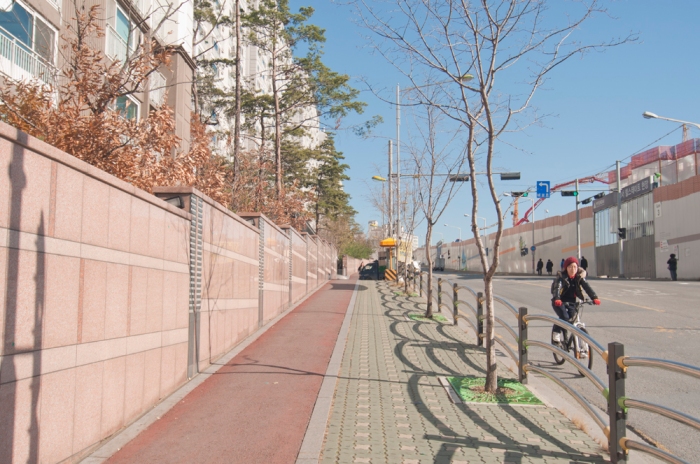 After several minutes of walking and wondering if I’d find the park at all I came to a sign for the Korea Polytechnic University, Seoul Gangseo Campus (한국폴리텍대학 서울강서캐머스) at Hwagok-ro-43-ga-gil (화곡로43가길).  I turned left here, and at the end of the street, just to the left was a set of stairs leading up to the school, and at the top of the stairs was a rubber walking track running along the mountain, lined with bright yellow ginkgos.  It was fairly busy for such an out of the way spot, and I joined the flow of mostly elderly walkers to see if it would take me into the park proper. 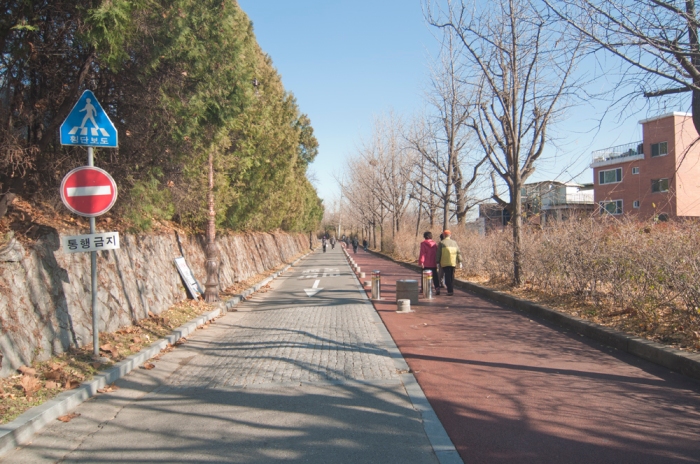 I’m still not sure if it did.  After following the path for a short while I came to a clearing for an athletics area where a father and son and a pair of friends were playing catch and some elementary school boys were playing soccer on a mini-pitch that was something like a negative image of a soccer field.  The court, as that’s a more accurate term, was completely enclosed by netting but the goals were not, so any ball that made it past the goalkeeper would roll and roll until it ran out of momentum.

A wooden staircase across from the playing fields let up the mountain slope, and a bit further along there was a regulation-size artificial turf soccer pitch, but it seemed like the main park facilities were maybe on the far, most inaccessible side of the mountain, and unfortunately with my work start time creeping up I didn’t have enough time to fully check things out.  If anyone’s been to the park and knows a bit more about it, please leave some info in the comments! 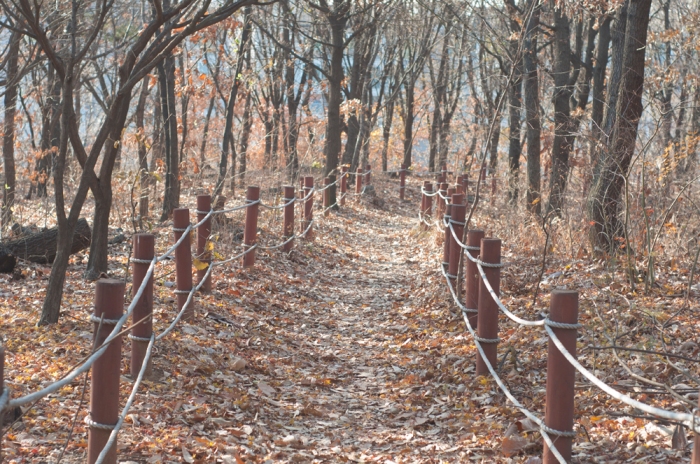 [Meagan here. I had time to walk around and up Ujangsan—there are some well-made, easy trails to follow, perfect for beginner hikers. The paths are lined with sculptures, slabs of wood with inscribed poems and little informational signs about the plants there. It’s a pleasant way to spend a few hours if you are in the area.] 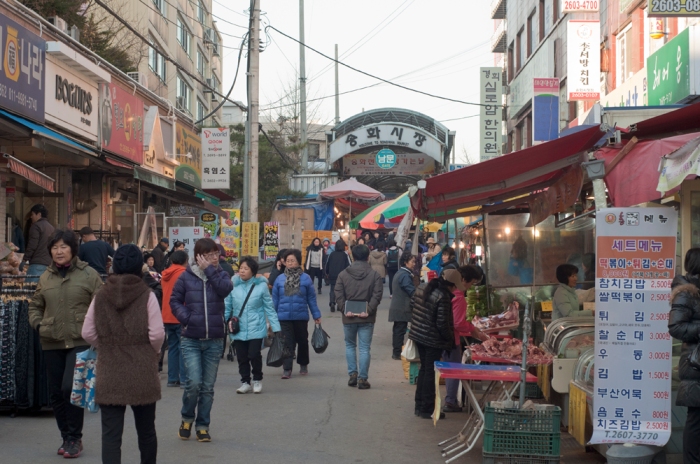 The Ujangsan neighborhood bore a lot of similarities to Balsan, where I’d just visited, though maybe just a bit rougher around the edges.  One thing it did have that Balsan didn’t, however, was a great little neighborhood market, Songhwa Market (송화시장), a short walk down Gangseo-ro (강서로) from Exit 4.  Covered and in the shape of a cross, it had narrow aisles, just wide enough for maybe three or four people to walk abreast, bringing opposite stalls face to face with each other.

The weather on the day I visited was cold, gray, and overcast, giving the neighborhood a glum and rather desolate atmosphere, but inside the market things were completely different.  The market was packed, and all the bodies and the cooking food made the air several degrees warmer than it was outside, and the indiscriminate light coming from the hundreds of bare light bulbs hanging from the ceiling gave the market a lively, vibrant feel.  Perhaps it was the contrasting weather outside, but the fruits looked brighter, the meat fresher, the fish shinier at Songhwa than they had at other markets I’d visited.

Walking up and down the aisles I watched as men shoveled tiny shrimp into plastic bags with giant forks and women scooped homemade gamjatang and yukgaejang into plastic bins, ready to be bought, vacuum sealed, and taken home to heat and eat.  Eating seemed to be as much of a preoccupation at Songhwa as shopping was.  The tteokbokki stand near the front entrance was packed and food stalls offering glistening mandu and buckwheat crepes were busy also, as were stalls cooking up hoddeok and gyeran bbang, two foods that are sure signs that winter is just around the corner. 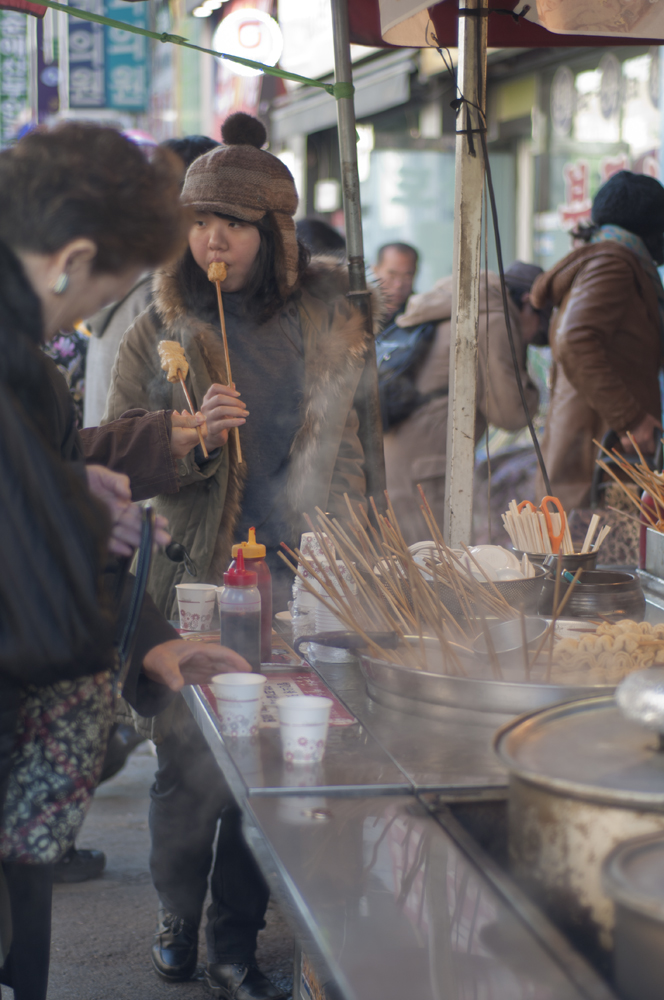 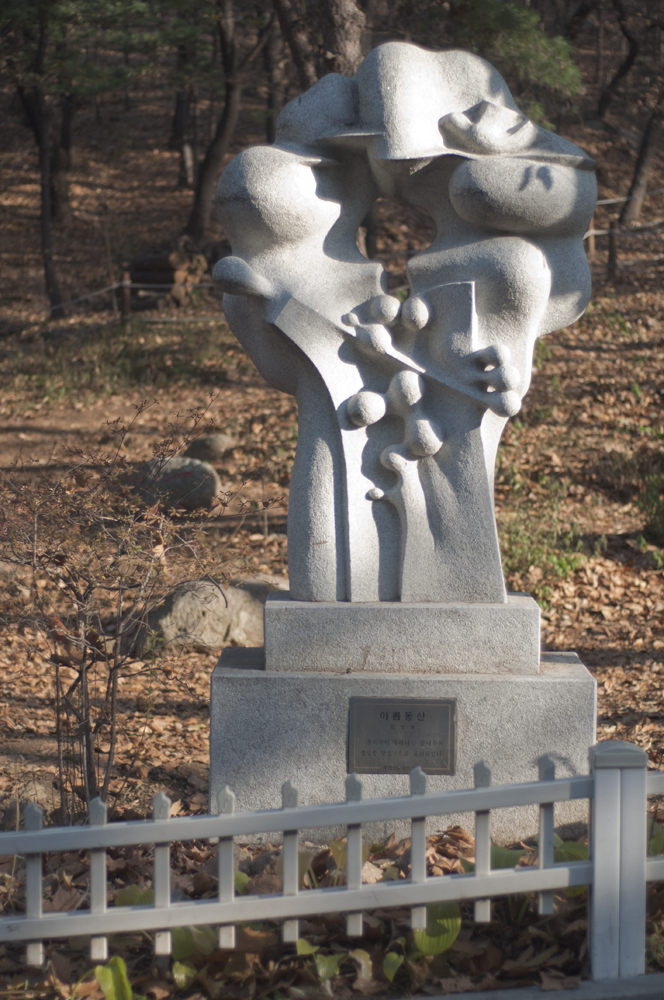