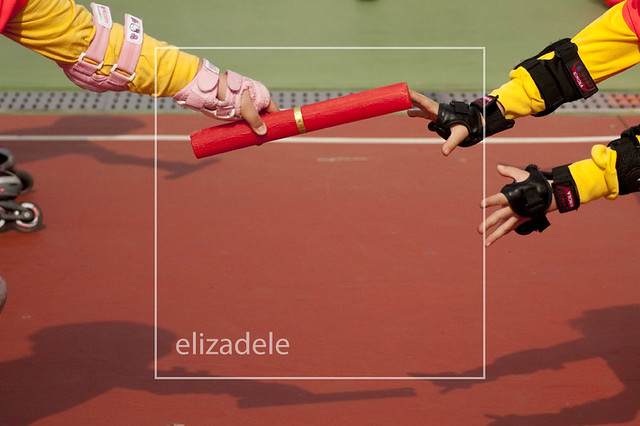 Much like with what passes for Seoul’s Chinatown, you could be forgiven for drifting through the city’s ‘Little Tokyo’ without ever knowing you were there.  Tucked between the station and the river, Ichon-dong (이촌동) doesn’t look distinctly different from any other middle-class neighborhood in Seoul, the sole thing giving you a hint of the presence of roughly 2,500 Japanese expats being the only slightly higher percentage of signs in hiragana.  Most easily reachable from either Exit 3-1 or 4, the area is quite pleasant – rather quiet and peaceful and featuring thoughtful little touches like signs describing the various sidewalk shrubbery. 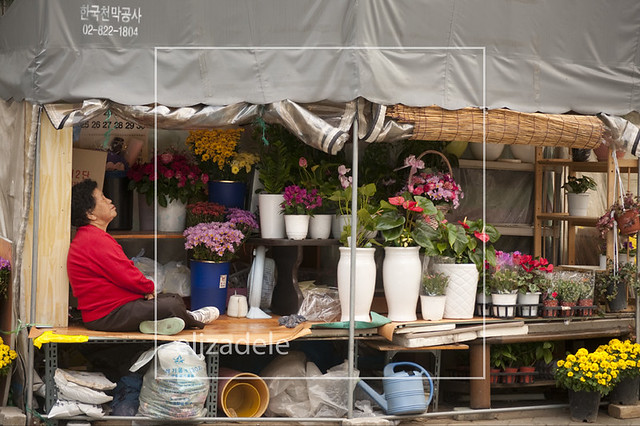 Of course the area is home to a number of Japanese restaurants, Sanuki and Dongmun Udong House being a couple of the more well-known, but there are obviously more options than just tempura and sushi.  A small and eclectic grouping – ranging from Italian bistro to bento to bosintang – is grouped around a couple small alleys that can be reached by hanging an immediate right after coming out of Exit 3-1 and crossing the first street you come to.  Nearby is the Dongbu Ichon Shopping Arcade (동부 이촌종합상가), a small covered alleyway lined with banchan sellers, ddeok shops, and small restaurants.  More information on the area can also be found by visiting the Ichon Global Village Center. 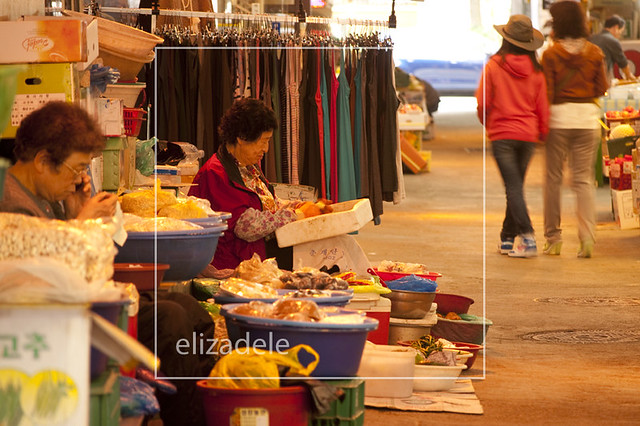 The weather was lovely on the day we visited, the leaves just starting to turn, and if it’s the same when you happen to go a visit to the Ichon section of the Hangang Park (한강시민공원 이촌지구) would be in perfect order.  In addition to the usual soccer, volleyball, and basketball facilities, this area also offers motor, pedal, and banana boat rental at the Turtle Ship Pier (거북선 나루터) and is the site of one of the docks for Seoul’s water taxi system. 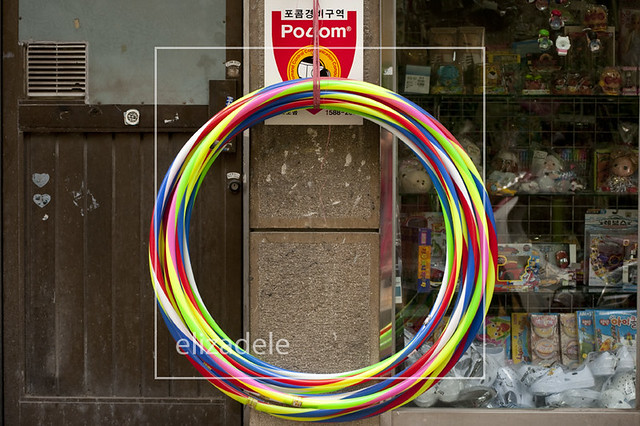 There were plenty of families out at the park, including a few playing baseball together, but oddly each group we saw consisted of just mom and the kids.  There wasn’t a dad to be seen.  Parental units were out in full force at the banked inline skating rink a bit further east, where Angel Kindergarten’s sports day was being held.  We walked in to the sounds of Europe’s ‘The Final Countdown’ blaring over the sound system as little guys lined up to await the start of the inline relay race, which blue team wound up winning by half a stride. 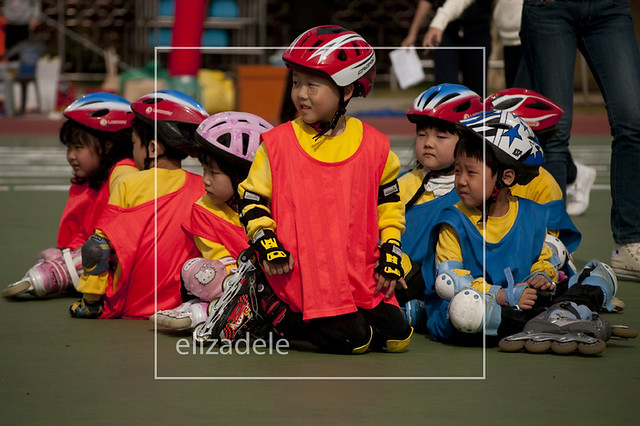 And remember, that’s half a kindergartener stride. 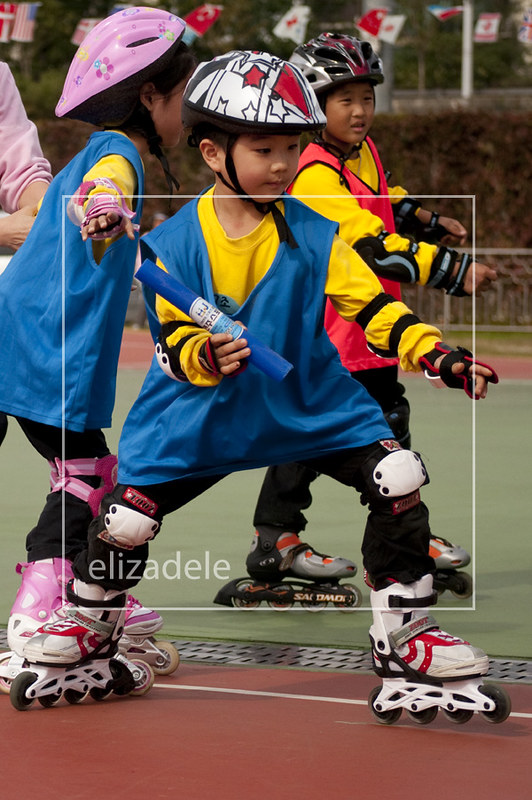 If you’ve been to Ichon Station before, it’s likely that it was to visit the area’s most famous attraction: the enormous, beautiful, and encyclopedic National Museum of Korea (국림중앙박물관), a short walk from Exit 2.  The museum is divided into two wings: the main Exhibition Hall to the east and the smaller Special Exhibition Gallery to the west.  It’s the largest museum in the country, and houses a huge array of artifacts – approximately 11,000 – ranging from paintings to sculptures to domestic articles covering Korean history from the prehistoric to the present.  What’s more, entrance is free. 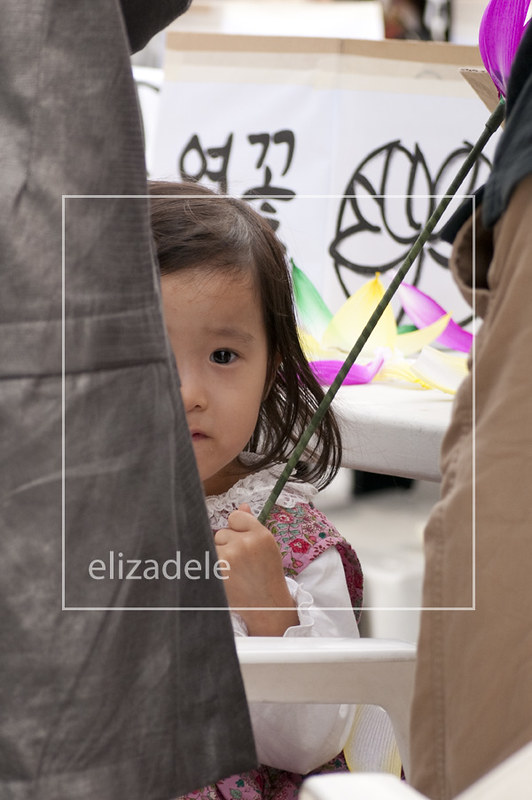 In addition to the museum proper, the grounds are also home to the Reflecting Pond (거울못) and Cheongjajeong Pavilion (청자정), the White Birch Walk (자작나무길), and the Fringe Flower Walk (이팝나무길), and they also host the occasional festival. 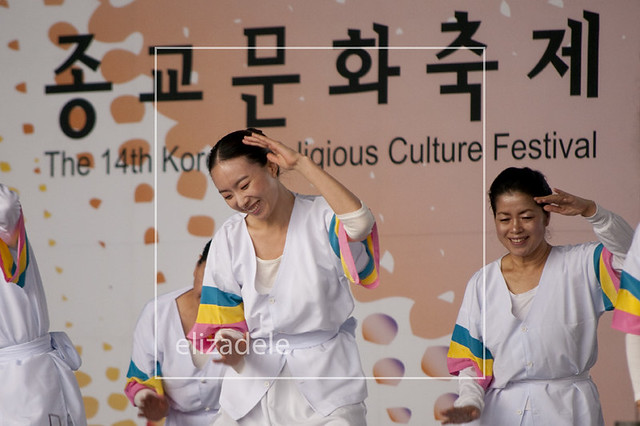 This particular weekend happened to be the 14th Korean Religious Culture Festival (제 14회 대한민국 종교문화축제).  Booths had been set up to provide information on Buddhism, Christianity, Korean Native Religions, and Cheondogyo (천도교).  The Christianity booth was by far the most popular (Hey, they were the only one with free t-shirts.); the world’s other three major faiths – Islam, Judaism, and Hinduism – conspicuous by their absence.  Tables nearby offered face painting and paper flower making.  Gotta placate the kids somehow.  Between the museum’s two wings (which, incidentally, frame nearby Namsan and N Seoul Tower quite perfectly) a stage had also been erected where, at the time we were there, singers and musicians performed music associated with traditional Korean spiritual practices. 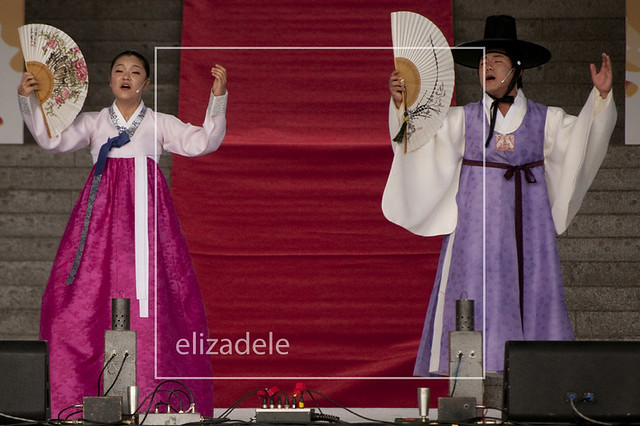 The museum takes up the western edge of the much larger Yongsan Family Park (용산가족공원), a huge expanse that was converted from land that used to be a golf course for the U.S. 8th Army.  Sections of the park almost seem more like a nature preserve, as walking paths are relatively secluded and closely flanked by reeds, trees, brush, and stone walls.  About half of the trees in the park had started to change colors when we visited, and the mottled foliage gave us an idea of both the park’s summer and autumn characteristics, but it would undoubtedly be lovely any time of year.  Northerner that I am, I’d personally be keen to visit right after a fresh snowfall. 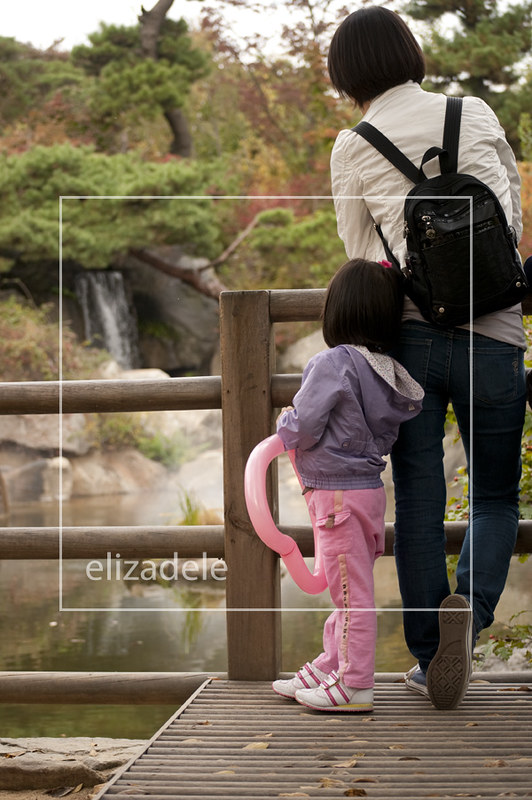 It may be completely artificial, but one of the park’s most scenic spots is Dragon Falls, where, from across a small pond, you can view a man-made waterfall pouring out of the rock before sliding over some artfully placed stones into the pool below.  Plenty of photographers here. 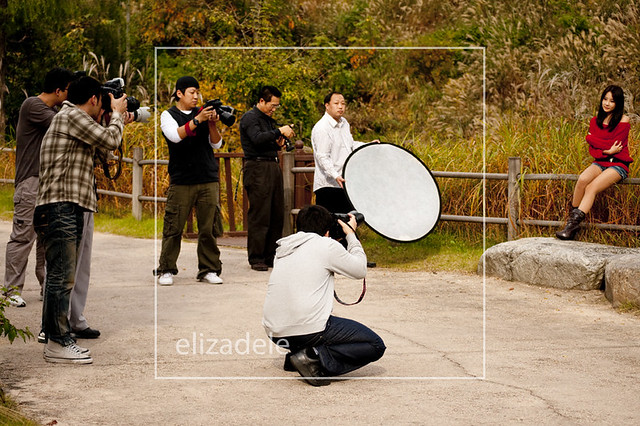 The eastern end of the park consists of some open lawn areas where families, friends, and couples were picnicking, playing sports, and relaxing in the grass and on benches.  It also features several large sculptures, including a curled hand made up of roof tiles and a gigantic park bench. 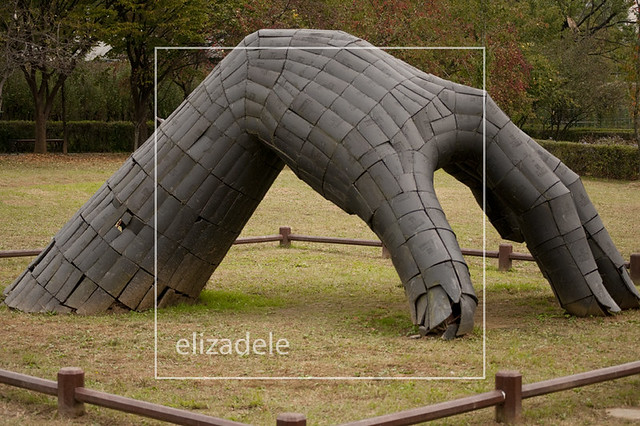 Also out on this day were a number of volunteers led by Mitzi Kaufman putting together a Pink Glove Dance in order to raise money for the Korean Breast Cancer Foundation and Susan G. Komen for the Cure. 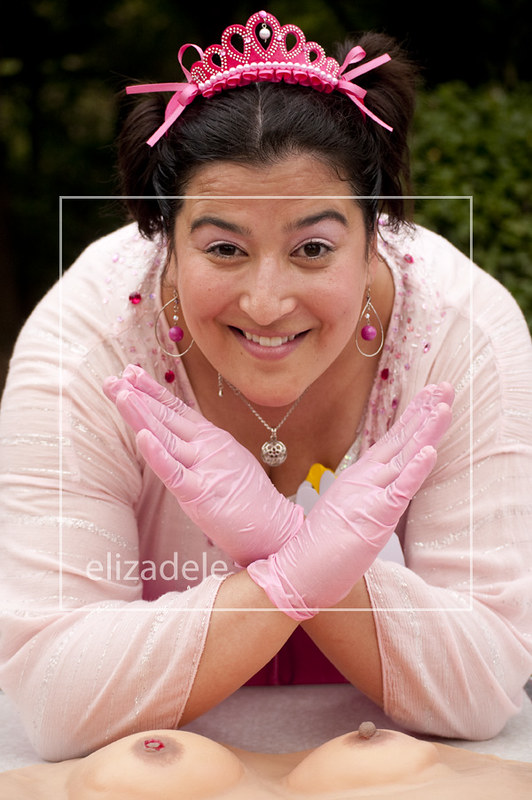 Not just pink gloves but also pink shirts, pink pants, pink wigs, and pink shoes abounded, though nothing evoked their dedication to the cause quite like their ability to listen to Jay Sean’s ‘Down’ on repeat for three hours while rehearsing and filming the video.  Speaking of which, you can see the finished product here.  Additionally, if you’re interested in donating to or simply learning more about the Susan G. Komen organization, we invite you to visit their website. 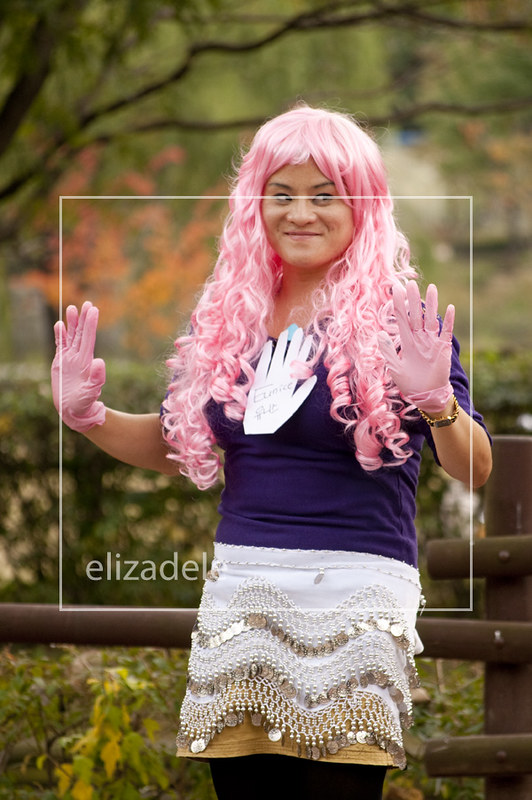 Opposite the Hangang Mansion Apartments 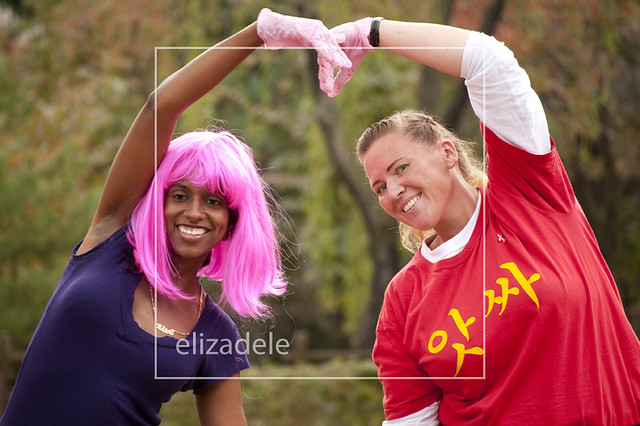