Unfortunately, Angelique and I had to drag around some dead weight this past trip, as my visiting siblings, Joe and Maggie, insisted on tagging along. (See guys, I promised I’d mention you! ㅋㅋㅋ) Actually, the real misfortune was that they were joining us at one of the duller areas we’ve visited in a while, no disrespect to any Sinbanpo-ites who may be reading.

The best part of this trip was the first part, and it was very, very good. Just about 20 meters outside of Exit 4, set in the first floor of a large granite building is the tiny wooden façade of Le Alaska Boulangerie Traditonelle. The name might be a bit weird, ‘traditionnel’ might be misspelled, and it might be in a rather out of-the-way location, but this little bakery single-handedly made my hour-long trip to Sinbanpo worth it.

Black-painted wood surrounds a cherry-brown door with metallic gold handle, and the shop’s large window displays a mixer, sacks of flour, and loaves of bread piled on top of each other. It also displays a sign of what you’ll find inside: a ‘Certificat de Pâtisserie de Base’ issued to Lee My-Ryung by Le Cordon Bleu in Paris. Let the wooden door close behind you and there’s very little at all to convince you that you’re still in Seoul and not, in fact, in the French capital. A smattering of Hangeul, prices quoted in won, and, of course, the staff are the only things tipping off where you are. Everything else, from the interior design to the bakery’s finished products are spot-on reproductions of what you’d find in France. In fact, ‘reproduction’ probably isn’t a fair word because it implies mimicry, and what Le Alaska has done is created both food and a space that simply are what they’re intended to be and not just versions of it.

The interior of Le Alaska is all warm shades of wood and soft lighting. A counter to the left and rows of breads and pastries on the right are separated by a narrow aisle that leads back to the ovens. The baked goods sit in tiered racks, each one with a small black sign on its front where the item’s name and price is written in white chalk. There are baguettes, small loaves of crusty uncut bread, bagels, croissants, olive rolls, and almond rolls with sweet cream or peanut butter cream filling. One pastry we tried, dubbed a ‘T-Book,’ was a croissant with a sweet walnut filling covered in a dusting of powdered sugar. Another, called an ‘apple pie,’ was filled with a sweet apple, cherry, and orange filling, and tasted something like a slice of traditional American apple pie that had had some of its cinnamon-y sweetness replaced with the tangy zip of summer fruits. To test the pâtisserie’s true chops we also got a simple plain croissant, and the buttery, flaky triangle passed with flying colors by any measure. 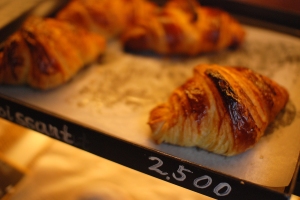 Though we didn’t try any, Le Alaska also makes a variety of sandwiches on baguettes, croissants, or ciabatta bread for around 7,500 won each. Pastries run in the 2,000-4,000 won range – not exactly cheap, but then again this ain’t Paris Baguette, kids. You do get what you pay for.

Leaving Le Alaska, full and happy, we turned south and walked through an area where a number of large new apartment complexes loomed and more were in the process of going up. The street brought us to the Banpo Sports Complex Center (반포종합운동장), a large expanse of various athletic facilities where several groups of kids in local sports clubs were out with their coaches. While one group of boys practiced their basketball bounce passes against a wall, a group of young girls participated in a roller hockey practice. The dirt soccer field, where a father was playing baseball with a son and some of the son’s friends, was ringed by a paved running and jogging track, which, when we were visiting, was being used by a kid in rollerblades practicing speed skating. The complex also has a half-dozen dirt tennis courts, on which a man was driving a small earth-leveling cart at the time. 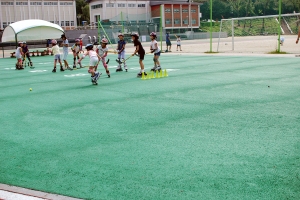 After watching the kids play for a bit we headed back towards the station and crossed Sinbanpo-ro (신반포로), taking the first right out of Exit 1. Two blocks north down this street brings you to the brand new Dulwich College School.

Continuing in the same direction leads you past some rather old and grungy apartments and a playground that’s been more or less abandoned. If you continue following the signs, though, this way will eventually lead to the Banpo area of the Han River Park (한강시민공원 반포지구), where you can make use of the basketball and badminton courts or bike path, or simply enjoy a stroll along the river. A footbridge leads to the small Sorae Island (소래섬), and from this stretch of the park you could also walk east just a short distance to Banpo Bridge (반포대교), where at 12:30 pm, 3 pm, 8 pm, 8:40 pm, and 9:20 pm from Monday to Thursday, and at those times plus 10 pm from Friday to Sunday you can watch the Banpo Bridge Moonlight Rainbow Fountain light up the river.

Take the first left; the complex will be on the right after approximately 200 meters