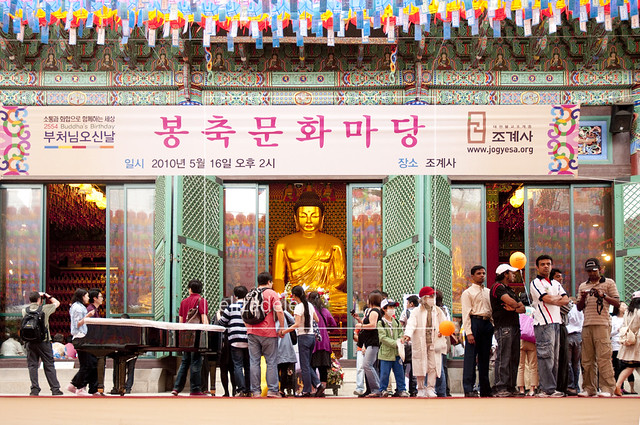 It’s the most wonderful time of the year in Jongno, and we planned our first visit to Seoul’s downtown accordingly.  With the recent weekend being Buddha’s Birthday (석가탄신일), the Sunday night prior was the annual Lotus Lantern Parade down Jong-ro (종로) from Dongdaemun to Jogyesa Temple, and so we headed to Jonggak Station to scope out the area and catch one of the city’s best celebrations at the same time.

The parade begins at 7:00, but when we arrived at Jonggak around 4:00 the area was already buzzing with crowds of tourists, expats, and locals.  An enormous stage had been set up in front of Bosingak, and the outside lane on either side of Jong-ro had been cordoned off and lined with two rows of gray plastic lawn chairs.

Directly across Jong-ro from the landmark Jongno Tower (종로타워) (Exit 3 or 3-1), one of the city’s most recognizable buildings, sits Bosingak (보신각) (Exit 4), which Jonggak takes its name from (jong (종) meaning ‘bell’ and gak (각) meaning ‘pavilion’).  The structure can disappear a bit among the skyscrapers that surround it, but it’s one of the most historically significant structures in Seoul, if not for the actual current structure at least for the heritage it represents.  The original belfry was built at the entrance to Insadong in 1396 to house the bell used to tell the time and mark the opening and closing of the city gates during the Joseon Dynasty.  The bell was rung 33 times (representing Buddhism’s 33 heavens) at 4 a.m. to herald the gates’ opening and 28 times (for the 28 solar stages of the zodiac) at 10 p.m. to announce their closing.  Destroyed and rebuilt a number of times, it migrated to Jonggak in 1413, was given the name Bosingak by King Gojong in 1895, and in 1979 the current structure was built.  A low concrete fence surrounds the plot of ground that it the belfry sits on, separating it from the sidewalk and keeping pedestrians off.  The plot’s south and east sides are edged with large trees that provide a tiny bit of peace between the avenues and the nightlife area, also accessible from Exit 4, that sits just south of Jong-ro.

We drifted through the crowd across Namdaemun-ro (남대문로), and on the corner waiting to cross Jong-ro mingled about with a group of pungmul (풍물) musicians in bright costume, their traditional headwear looking something like several gumballs stuck atop a flying nun’s hat.

Ujeonggung-ro (우정국로), the street running north from Jonggak Station past Jogye Temple, had been cordoned off for the final leg of the parade and for a street festival that was in the process of wrapping up when we got there.  Both sides of the street were lined with now half-disassembled tents.  Hundreds of tourists walked about, most moving the opposite direction we were, toward Jong-ro to stake out a spot for the parade, but files of police, children in hanbok, and Koreans in various traditional costumes all wove through the visitors.  A small temporary stage had been set up around Sambong-gil (삼봉길), and a rotating cast of ballad singers, hip-hop dancers, and youth samulnori (삼물놀이) groups performed for the crowd.  Taking advantage of the stage’s pull, a silent Dokdo protester stood on a pedestal a few feet away holding a sign, dressed in all white with an odd masked headpiece that included a wide ring encircling his face.

Starting just north of Sambong-gil is a string of Buddhist supply stores and monastic clothing shops, servicing the monks and devotees of nearby Jogyesa.  Just about anything you could need for proper worship can be found there, from tiny lotus votive candles to mini-pagoda statuettes to prayer beads to incense burners to Buddhist figures of all shapes and sizes.  Of course there were also all sorts of paper lanterns for the holiday season, including one shaped like Pikachu.  My favorite sight, though, was a shop window holding a trio of gray Buddhist robes lined up on featureless mannequins, contrasted against a background of bright red and gold pillows on shelves behind them.  This stretch of sidewalk is also a regular host to a large contingent of ajummas selling dried fish and herbs, both dried and not.  Though most had either left or taken the special day off, a few were still posted along the way, squatting next to bowls and blankets displaying their merchandise.

Jogyesa (조계사) (Exit 2), located about halfway between Jong-ro and Yulgong-ro (율곡로) on Ujeonggung-ro, was established in 1395 and is the main temple for Korean Buddhism’s Jogye Order.  Directly across the street is the Templestay Info Center.  Always a peaceful place to visit, it’s especially wonderful around the time of Buddha’s birthday.  The entire temple courtyard is canopied in rows of blue, white, yellow, red, orange, pink, and green lanterns that form a Korean yin-yang in the center, nearly blocking out the sky above.  Standing underneath it feels as if you’re standing inside of a giant prism.

The smaller courtyard fronting the south-facing Great Hero Hall (Jogyesa’s main building) was also covered with hanging lanterns.  While devotees made their way up to them, the three giant gilded Buddhas inside the hall looked out on the courtyard’s enormous 500-year-old Chinese Scholar Tree (Natural Monument No. 9).  Its top disappeared into the carpet of lanterns overhead, as if its branches were reaching all the way to heaven or to nowhere at all.

At the rear of the complex, between the Great Hero Hall and the Paradise Hall were more lanterns, but unlike the others these were all white.  Lower to the ground, the arrangement here gave us a look at how the decorations were set up.  Each lantern was connected to a small electric bulb on a grid of criss-crossed wires, something like if Christmas lights were grown on a tree farm.

Leaving Jogyesa we passed under the One Pillar Gate that separates the complex from the city outside.  Because this is Korea, and it’s enshrined somewhere in the constitution that some sort of diversionary technology must exist everywhere, an interactive digital projection of a koi pond, complete with virtual lily pads, was projected on the ground underneath the gate.  The fish lazily ‘swam’ about, but would quickly scatter if someone stepped too near them.  It says a great deal about Korea that the one other place I’ve seen this type of thing was inside the COEX Mall, which is to capitalism what Jogyesa is to Zen Buddhism.  Back on the street, we headed to Jong-ro, the crowds getting thicker the closer we got, the deeper dusk became, and the closer the time got to Seoul’s most magical night.