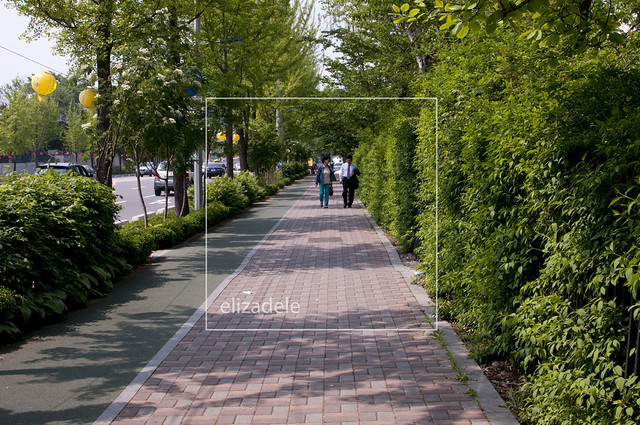 Our first foray onto the Bundang Line brought us to Gaepo-dong Station on a gloriously sunny Sunday afternoon.  The Yangjae Stream runs just north of the station, so we decided to begin the tour by heading south on Samsung-ro (삼성로) into the neighborhood that the station serves. 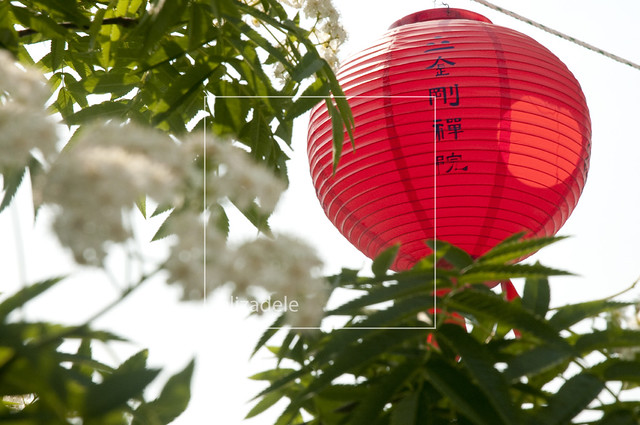 The walk south from Exit 6 was pleasant – colored lanterns for Buddha’s birthday were strung along the street; trees lined both sides of the sidewalk, almost creating a canopy; and leafy bushes grew over the low iron fences separating the sidewalk from parking lots and businesses – but there wasn’t really anything of interest, so after a few hundred meters we hung a u-turn and headed back towards the station.

At the station, we crossed the street west to the opposite corner, near Exit 8, where the Japanese School in Seoul (서울일본인학교) is located.  Its large red brick buildings stood behind locked gates, however, so we couldn’t get in for a closer look. 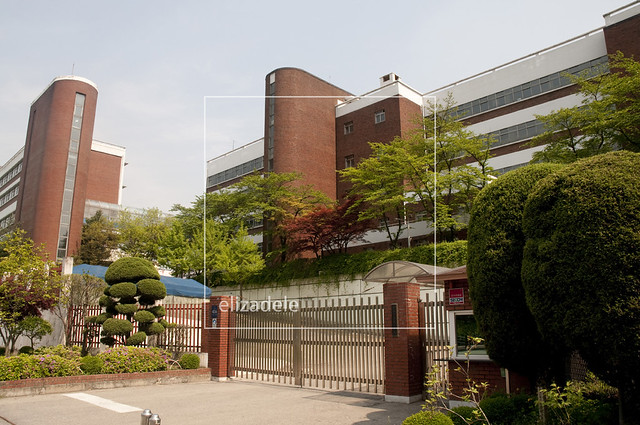 Continuing west along Gaepo-gil (개포길) brought us to the Gyeonggi Girls High School (경기여자고등학교), where dozens of tour buses were pulled up and a few hundred middle-aged folks were on what we guessed to be a company picnic.  A couple dozen were involved in a tug-of-war competition on the soccer pitch, but the vast majority was seated on blankets or at folding tables underneath tents that lined two sides of the field.  There was plenty of kimbap to go around and lots and lots of bottles of beer, soju, and makkeoli.  It looked to have taken its toll on at least one of the attendees, who had spread out an insulated blanket and lain down for a nap in the middle of a traffic island. 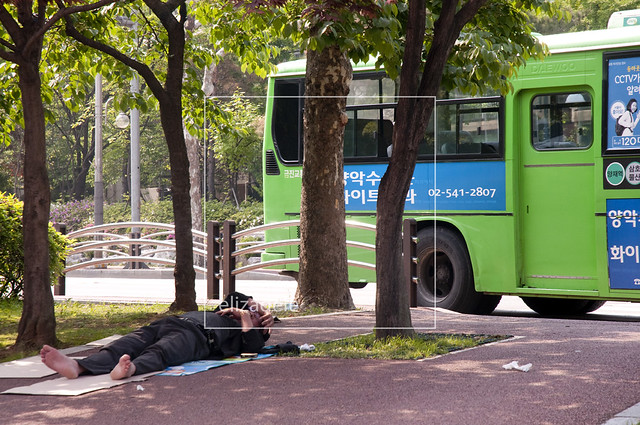 Going back, all of the entrances into Gaepo West Park (개포서근공원) by Exit 1 were closed off as the paths were torn up, but we had better luck across the street at Gaepo East Park (개포동근공원).  The park was lovely, with shaded walking paths that took us past some kids playing seven-a-side basketball and a young rollerblader whose left boot was untied, leaving it to flop and bend at the ankle, so that his process of chasing after his more securely shod sister involved small strokes with his right foot and a ball-and-chained dragging of his left. 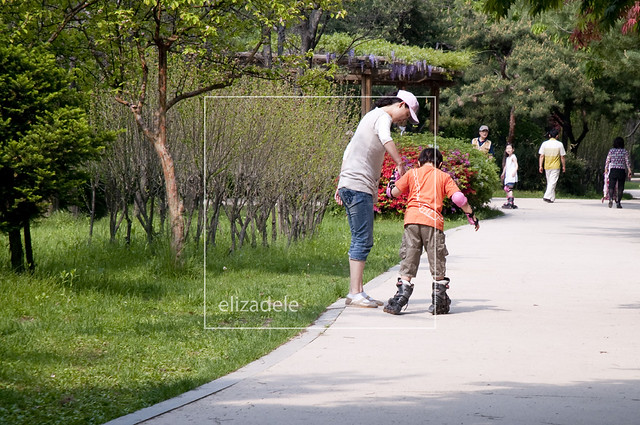 We took some stairs that led down to the stream bank and strolled west, eventually getting to a wood and brick pavilion underneath the Yeongdong 6 Bridge (영동6교), where families were taking a break from the hot sun to relax in the shade.  Other people were using the Sunday to take the family pet out, and several small dogs wandered around. 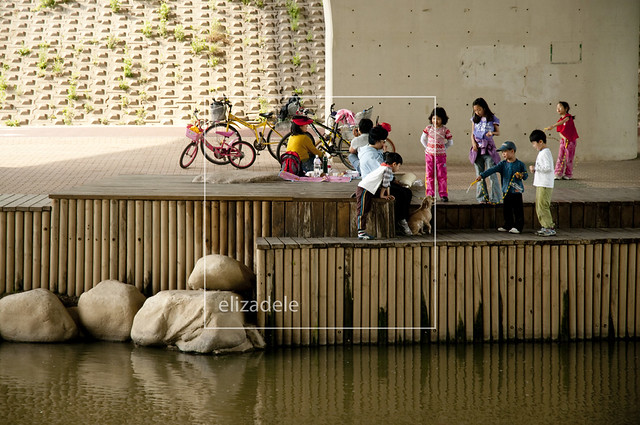 Returning to the station, we walked on a wide bike and pedestrian path past the tall grasses and reeds that lined the slow-moving brown stream.  Yangjae Stream (양재천) and the path running along it are well sunken from the street above, so the sight of apartments and traffic and city on the near side of the stream are obscured, and only a look across to the opposite side or into the distance ahead brings Gangnam’s hulking apartment towers into view. 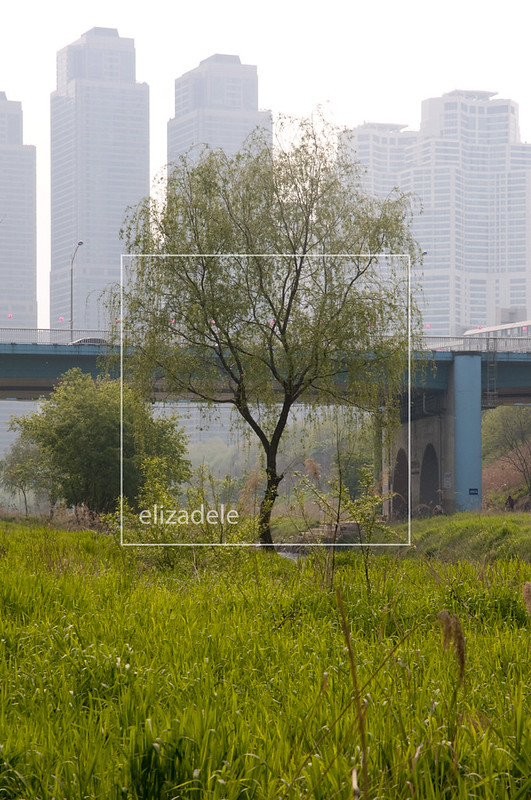 Another pavilion occupied the shaded area below Yeongdong 5 Bridge (영동5교) and the station, and here too families and couples lazed about, grabbing a few more hours of relaxation before the busy Seoul week started again. 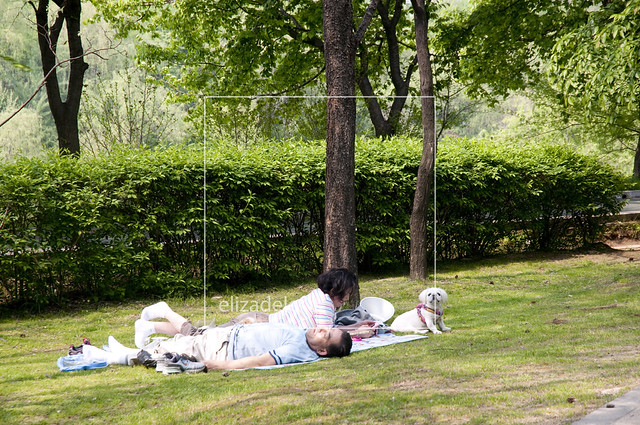 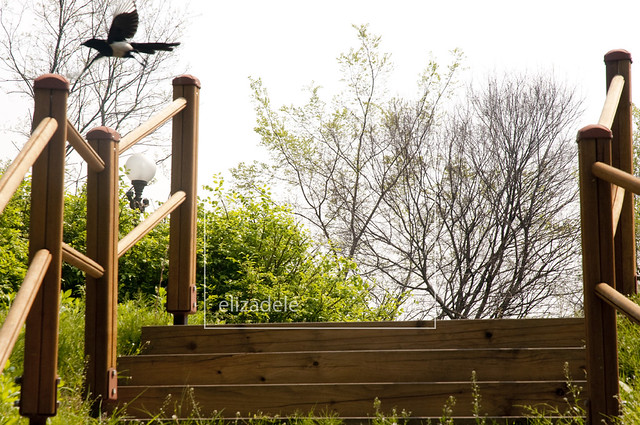