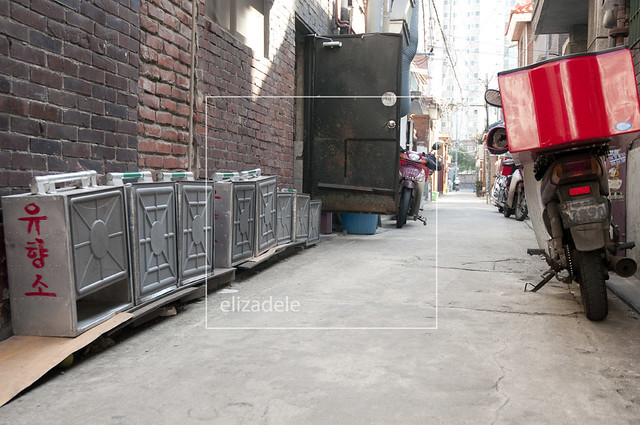 A good portion of Seongsam-gil (성삼길) running north from Exit 2 is lined with auto mechanics – grease and tools, garage doors open to the street.  At the end of the road, fronting the T-junction with Gwangnaru-gil (광나루길), another type of reconstruction is the focus at the Korean Dental Association (치과의사회관).  But with flawless teeth and no cars neither one of these held much interest for us so we turned west on Gwangnaru-gil. 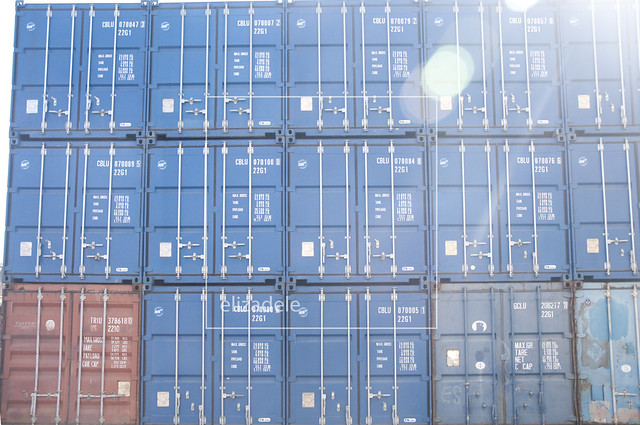 Almost right around the corner was a small back lot where shipping containers stacked three high were packed tight in several rows.  The south side of Gwangnaru-gil was lined mostly with auto supply shops – which no doubt had quite a bit of neighborhood business – and with shops selling all varieties of mechanical supplies.  A pair of these, right next to each other, had large racks of differently sized and shaped steel beams, and at a third store of this type a bit further on we paused and watched a worker feed one of these beams through a cutting machine. 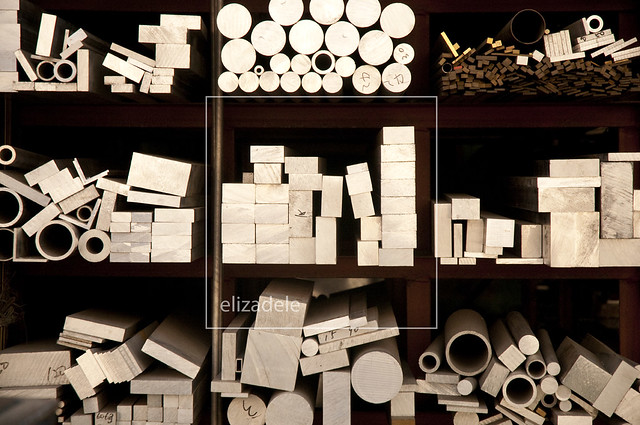 The beam was about two meters long and the diameter of a poker chip.  It passed through one end of the machine and came out the other where it was sliced into small disks, each about a centimeter thick.  This was accompanied by a shrill whine as the machine cut through the metal, though one that wasn’t as loud as I would have imagined.  On the floor a pile of steel shavings had accumulated, looking like the debris from an exploded mirror ball. 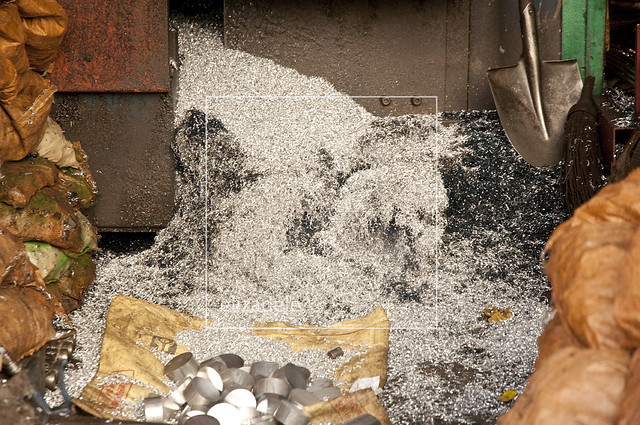 We walked south down Gamnamu-gil (감나물길) back toward the station, through a very typical Seoul neighborhood: restaurants, stores, cafes, beauty salons.  The only thing that was really of any particular interest was in the display tank of a seafood restaurant, where a single fish rested on the bottom of the tank, upside-down. 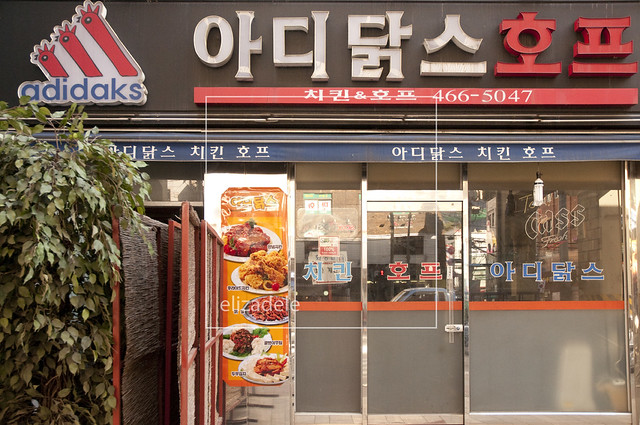 Back at the station we crossed to the south side of Guui-ro (구의로).  The street, covered by the elevated line two tracks, got very little of the bright sunlight that was out that day, and felt a bit like some of the avenues shadowed by the L in downtown Chicago.  When we crossed we also saw one of the more clever, if still nonsensical, combinations of English and Korean that we’ve come across: a fried chicken hof called ‘adidaks’ (아디닭스호프). 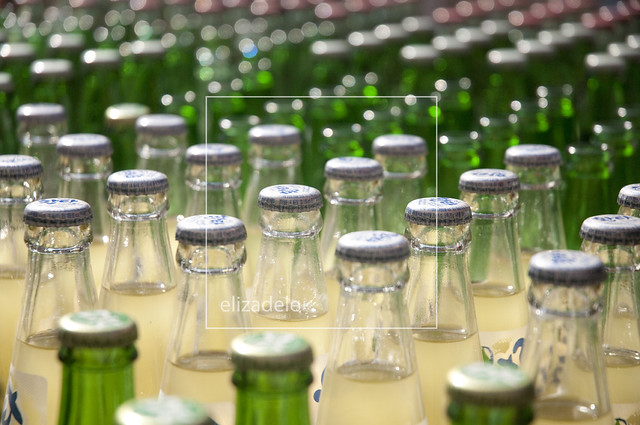 On the south side of Guui-ro, Seongsam-gil is renamed Hanmaeum-gil (한마음길), and from Exit 3 we continued heading towards Ttukdo Market.  En route, we passed not only a random heavy bag hanging from a telephone pole, but also a giant golden stiletto perched on a building roof.  Words fail on this one, and I have no choice but to leave it up to Liz’s visual: 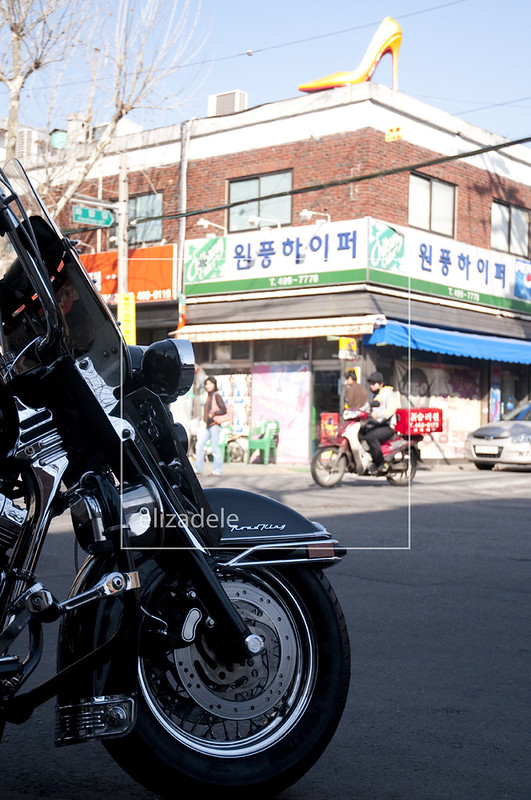 Ttukdo Market’s (뚝도시장) building was on the west side of the street.  It contained all the usual suspects – grains, banchan, tteok, butchers, shoes, clothes, small restaurants – and we didn’t do more than casually wander through. 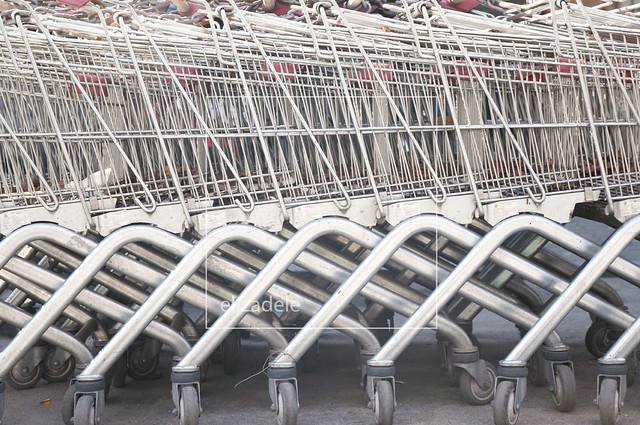 If you continue following Hanmaeum-gil south you’ll eventually reach Hangang Park (한강공원).  A pedestrian tunnel leads under the expressway from the cul-de-sac at the end of the street to the riverside.  At this section of the park a bike path ran parallel to the river and a concrete boat landing sloped into the Han just to the right of where you exit the tunnel. 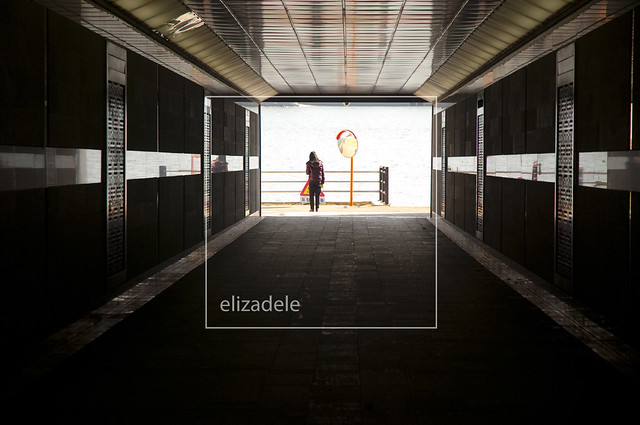 The weather was pleasant, and so when we were there plenty of people were out biking, jogging, and fishing.  Despite the Gangbyeon Expressway being directly behind us the air felt fresh, and a glance to the west offered a clear view of Namsan and N Seoul Tower. 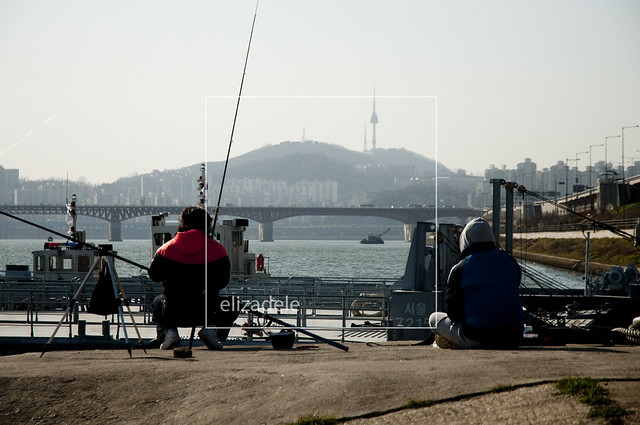 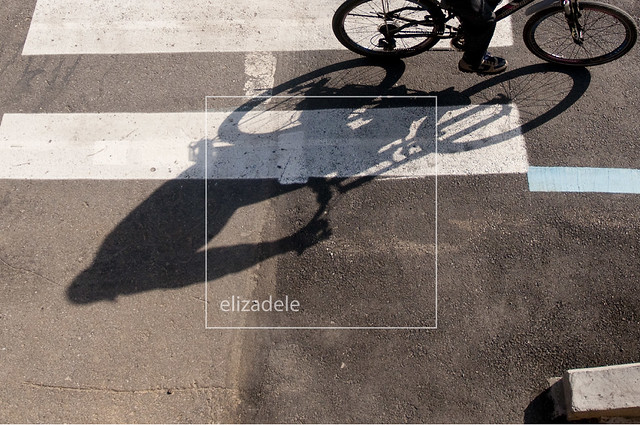