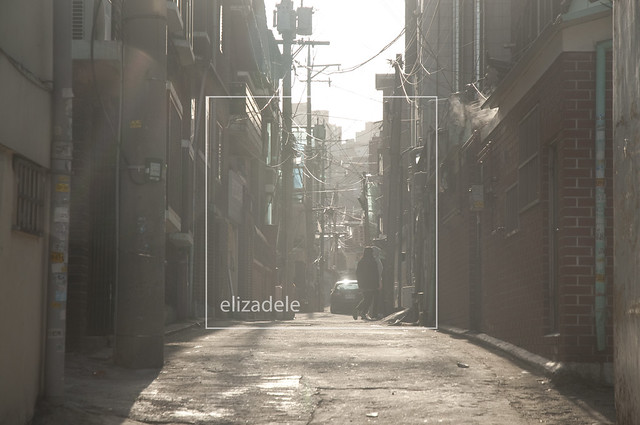 The area just north of Ahyeon Station was busy on the Saturday we visited it, buzzing with kids with a day off from school. We were walking north on Buk-Ahyeon-gil (북아현길) from Exit 1, and a good portion of those we were sharing the street with were of the plaid skirt and blazer set. I specifically say street because there are no sidewalks on Buk-Ahyeon-gil, just a few feet on either side of the road set off with steel traffic pillars where several vendors had set up stalls. Some sold fish, some sold odeng, some clothes; one hawked kitchen pots alongside an electric keyboard, perfect if you want a little Bossa Nova 2 to zazz up the carbonara you were planning to make. 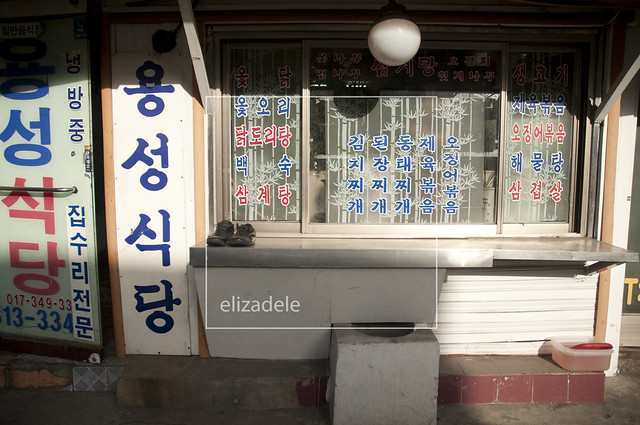 We doubled back and from Exit 2 walked east down Nongbang-gil (농방길) to see about Ahyeon’s furniture arcade. The street was lined with furniture stores, much less upscale than what we saw in Nonhyeon, these focusing mostly on basic home and office supplies: couches, chairs, desks, settees, chests, drawers, beds, coat racks, picnic tables. One shop had chairs arranged on a tiny wooden stoop, like you might see on a rural American porch somewhere; there was even a rocking chair. No sign of a hound dog anywhere, though. 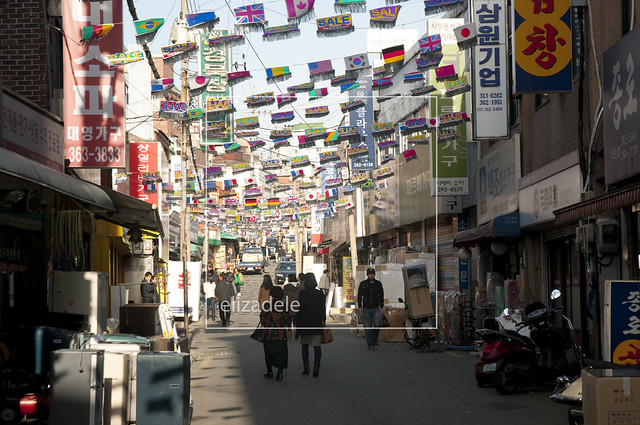 At the end of Nongbang-gil we hooked back around to the main drag, Sinchon-ro (신촌로), where more furniture stores lined the avenue, their stocks lined up on the sidewalk. 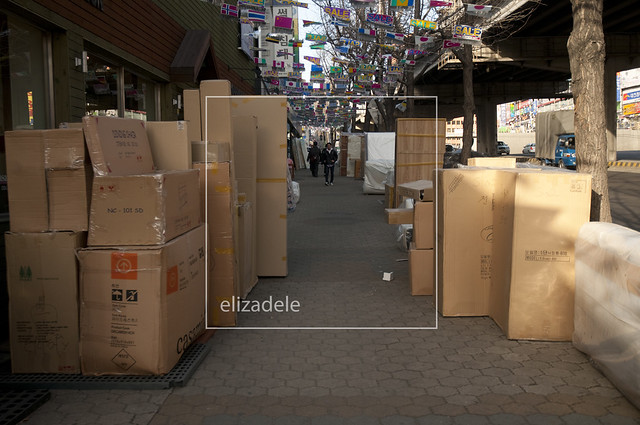 Across Sinchon-ro and out Exit 3, a number of tiny pojangmachas were lined up in a row in front of Ahyeon Elementary and Middle Schools. They were all closed the Saturday afternoon we visited, but presumably they make a killing on the post-school rush. 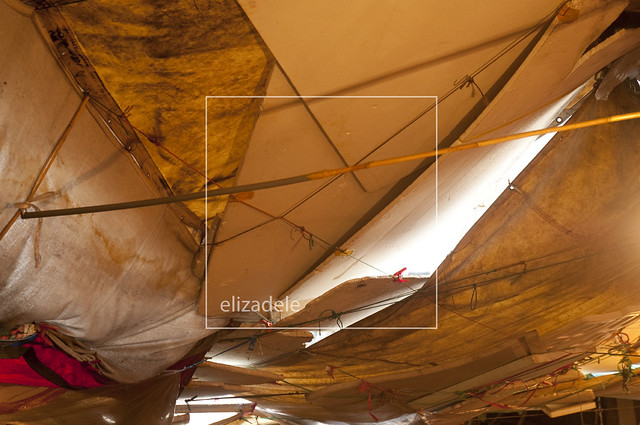 Ahyeon Market (아현시장) is accessible from either Exit 3 or 4. It’s your typical neighborhood market, stocked with produce, dry goods, sea food, and household wares, but what made it interesting was that it was tucked into a number of small alleys off the main street, and the entire thing was canopied with different colored tarps tied into a patchwork overhead. Most markets in Seoul are a collection of adjacent storefronts that spill into the street with a few additional carts here and there, but Ahyeon Market reminded me of markets in Southeast Asia. There were some vendors operating out of very small storefronts, but the tiny alleys pressed them closer together and the low-hanging tarps made things feel more enclosed and less orderly. 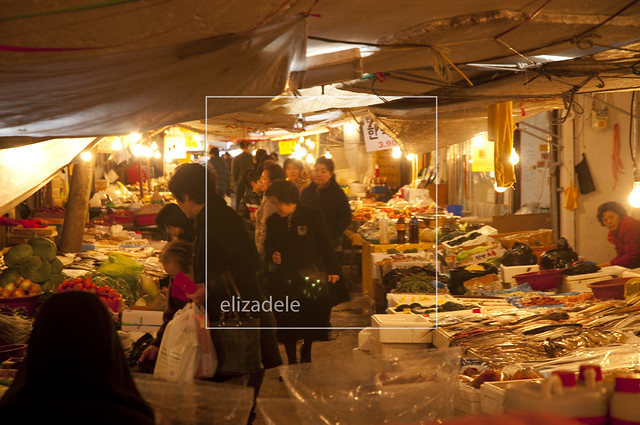 We continued walking west through the backstreets, and though the market thinned out it was hard to say where exactly it ended. The groupings of vendors disappeared but there were several food stalls further down, interspersed with fabric and hanbok shops. Parts of the alleys were covered with more tarps, and restaurants with a half-dozen tables lined up next to butchers, ddeok stores, dry cleaners, and donut shops. An overseas call shop had phones on a counter and a row of red Chinese lanterns hanging outside. 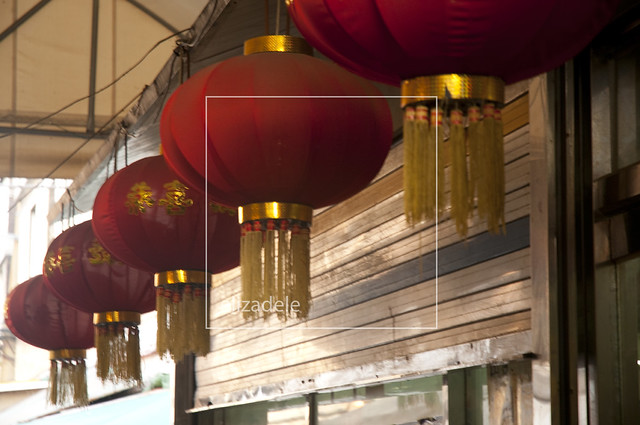 Stone blocks set into the sidewalk announce the stretch of Sinchon-ro between Ahyeon and Ewha Womans University as Mapo Wedding Town. All along the stretch between the two stations (starting around the intersection with Nanum-gil (나눔길), coming from Ahyeon) the street is lined with wedding dress shops. Some specialized in western styles, some in hanbok, and a few others displayed modernized hanbok, the dresses’ forms trimmed and altered into updated cuts. Rather oddly, with all of the dress shops in the area, we didn’t notice a single wedding hall where you could have your in-n-out nuptials. If you’re in the area and looking to tie the knot, and if you have more than a half hour to spare, you could take care of business at the enormous brick Ahyeon Church (아현교회), which sits imposingly in the middle of Wedding Town. 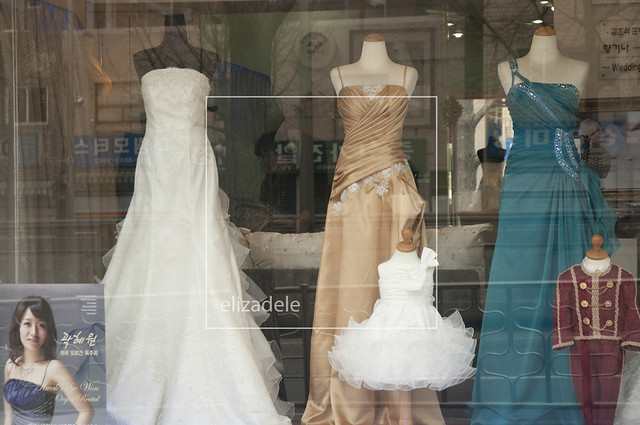 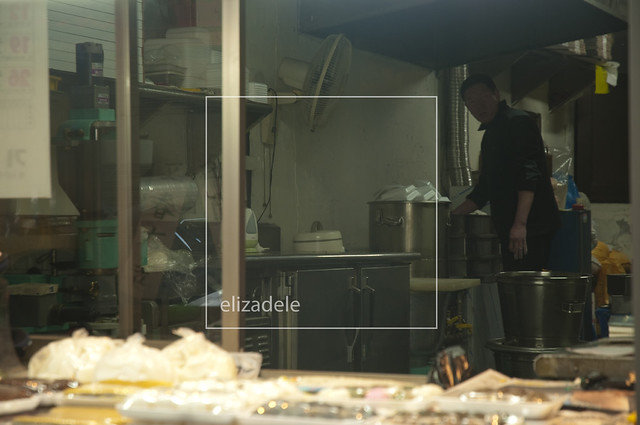