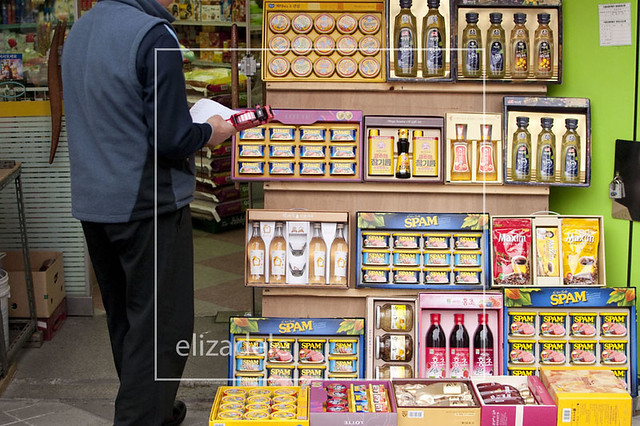 With no ancestral homes in Jeolla or Chungcheong-do to trek to for Seollal this past weekend, Liz and I made our very first trip to Eunpyeong-gu (은평구). Given the holiday, I half-expected it to be completely dead, and while it was quiet, there were enough stores open and people out and about that it still felt like Seoul.

Leaving from Exit 2, we first climbed a couple of steep streets to check out the Seoul Christian University (서울기독대학교). The campus, if you want to call it that, consisted of about a half dozen buildings set high on a hill northwest of the station. The main building was seven stories of red brick and looked like nothing so much as an overgrown middle school. The buildings were even set up around a dirt playground (snow-covered) with futsal-sized soccer goals at either end. 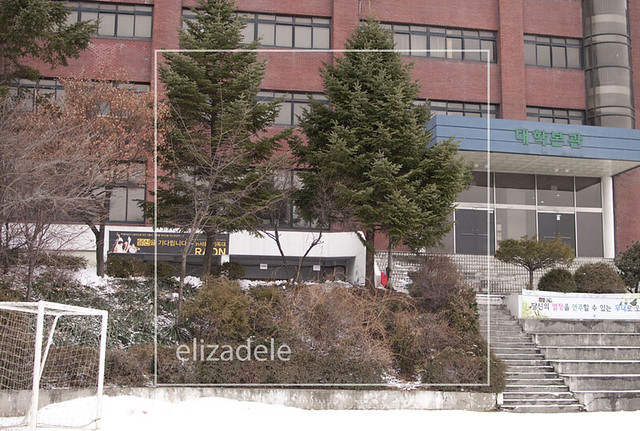 On the other side of Jeungsan-ro (증산로), which is the main north-south street in the area and runs above the Line 6 tracks, we poked around Yeokchon-dong (역촌동), accessible from Exit 3. A few blocks east of and parallel to Jeungsan-ro is Seobusijang-gil (서부시장길). Normally you could find the Seobujoham Market (서부조함시장) here, but on Sunday everything except for a few small neighborhood grocers was closed up, of course. (The area around Eungam Station has two other markets: Sinheung Market (신흥시장) to the southwest, reached from Exit 1, and Eungam Market (응암시장) to the southeast, reached from Exit 4.) It’s a pleasant little street to stroll down, with traffic limited to a single lane and wide (for Korea) brick-paved sidewalks. 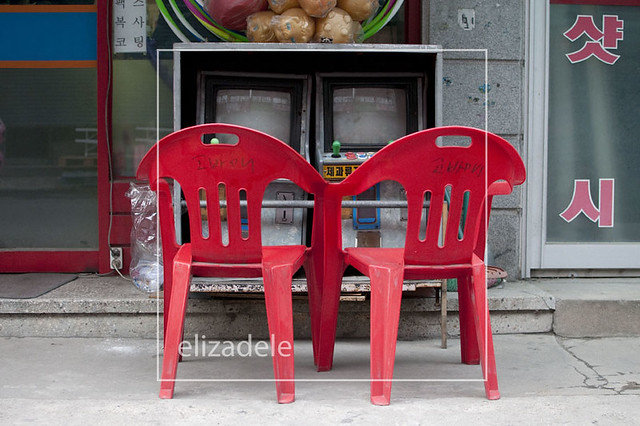 Seobusijang-gil took us back near the station, and after a quick re-check of the map, from Exit 4 we went to scope out what was labeled alternately as the Shinjin Automobile High School (신진자동차고등학교) and the Science and Technology High School. We kind of expected (and secretly hoped) that it’d be a few run-down buildings fronted by a yard of uncut grass where rusting and half-dismantled  Ford Thunderbirds (HT to Walter Foreman at TBS for calling me on my automotive ignorance.) and decades-old Hyundais sat up on blocks, chain-smoking and grease-smudged Korean teens with wrenches tucked into their waistbands and 김민수 nametags on their wifebeaters hanging around playing cards and swearing at uncooperative transmissions, Kumho Tire calendars with bikini-clad girls lounging on Ecsta SPT KU31s hanging crookedly on the wall behind them. Disappointingly, it was one of the nicest looking high schools we’ve seen: a half-dozen large buildings and a grass soccer field with a four-lane track running around it: clearly no environment to learn how to roll back the odometer or jack up an engine’s horsepower. 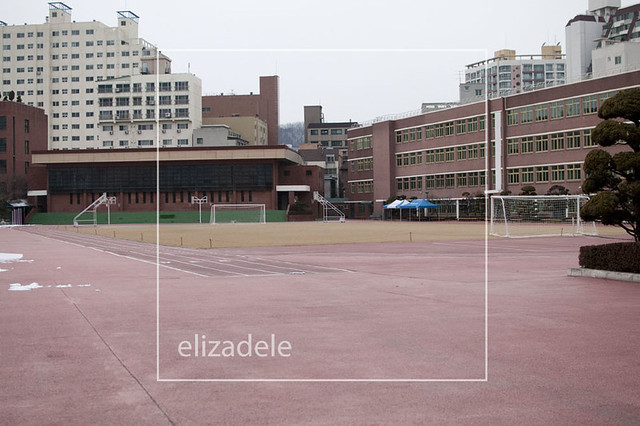 If you’ve been to the World Cup Park, you may have watched the Bulgwang Stream (불광천) empty out into the Han River near the intersection of the Gangbyeon and Naebu Expressways. If you were to trace it back to where it starts, you’d arrive here, Eungam Station, where it comes out from underneath and pours down from an artificial waterfall built into a bridge on Eunpyeong-ro (은평로). This part of the stream at least (We haven’t seen it further downstream.) is kind of a mini-Cheongyecheon: simpler and more modest, but having been revamped in a similar manner. 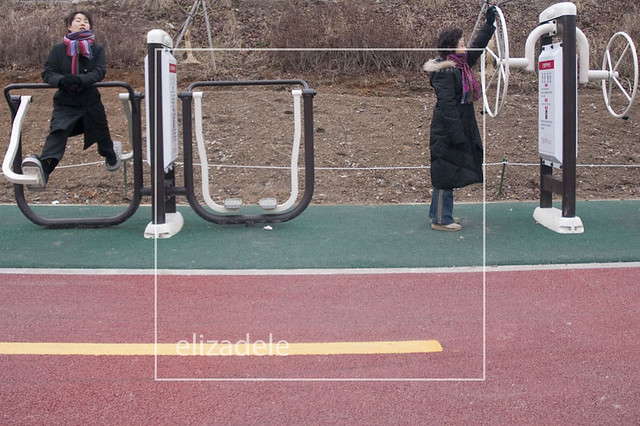 Either side of the stream is lined with separate walking and biking paths, and every few hundred meters a half-dozen exercise machines are grouped. The Bulgwang’s water was still, brown, shallow, and clear – you could see the large stones running down the middle of the streambed from the street above. It’s banks are lined with reeds, which, in the February chill, were a wintry dun color and matted near the ground. A little ways downstream, just south of the Sanchaek-ro (산책로) stepping stone bridge, we saw a trio of ducks paddling in the water, and further back upstream two more were underneath the steel Eunpyeong Rainbow Bridge, bobbing for food, their back ends sticking up in the air. 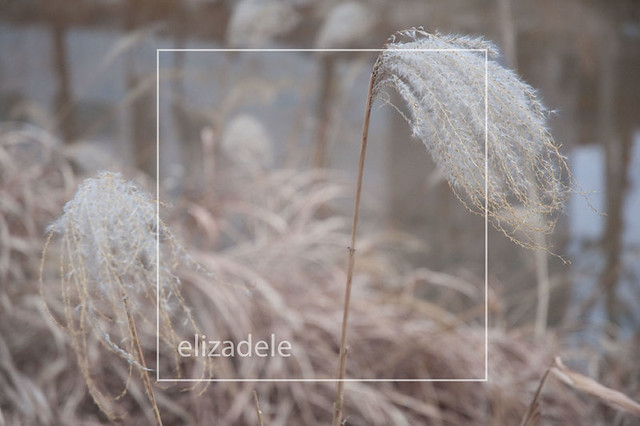 Near the head of the stream a fountain is set up in the middle of the river, and at night it’s the focal point of a water and light show. The banks on either side at this point give way to a series of steps for people to sit on and enjoy the performance. Five more ducks lingered around here, three of them out of the water, drying off on rocks midstream. 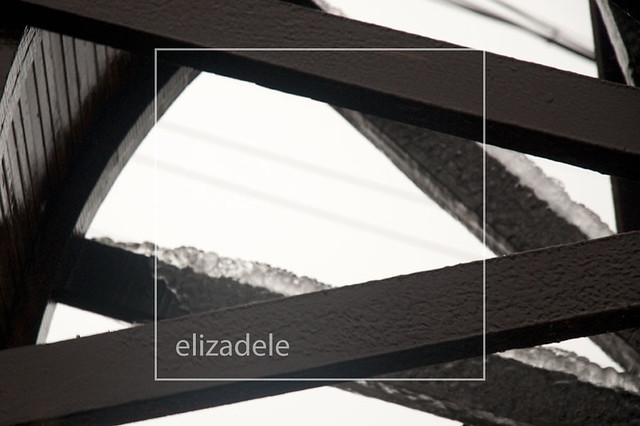 Up near where the stream begins (presumably from the point where it was paved over to build a road) and next to the waterfall pouring from the top of Eunpyeong-ro, a waterwheel was set above some rocks, dropping water into the stream, fingers of ice frozen onto either side of its spokes. The only real blemish on the scene was an unfortunate concession to the need for something cute: a pair of mini-waterwheels designed to look like a bicycle built for two being ridden by a couple of wooden cows. 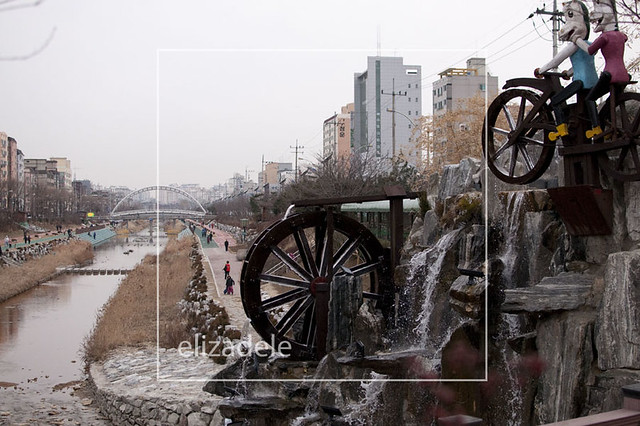 If you’re so inclined, bike rentals are available at the top of the stream, and in warmer weather a cycle along the Bulgwang Stream through Eunpyeong-, Seodaemun-, and Mapo-gu to the Han River would be a good way to see Seoul’s northwest side. 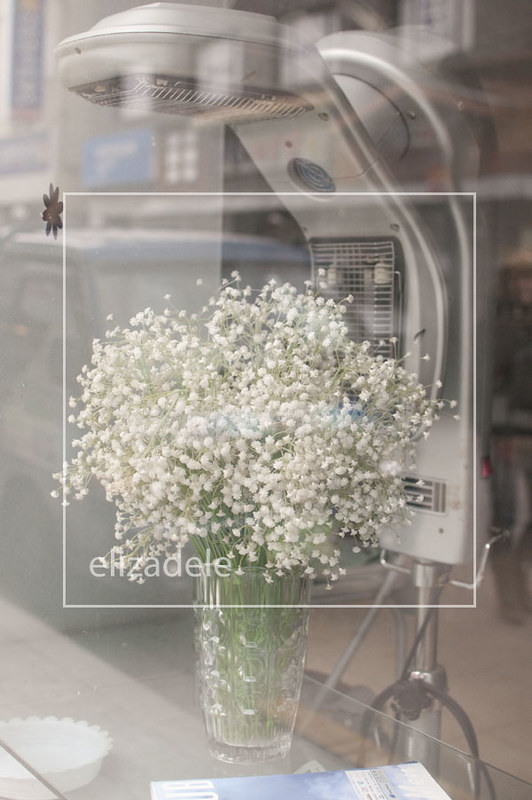