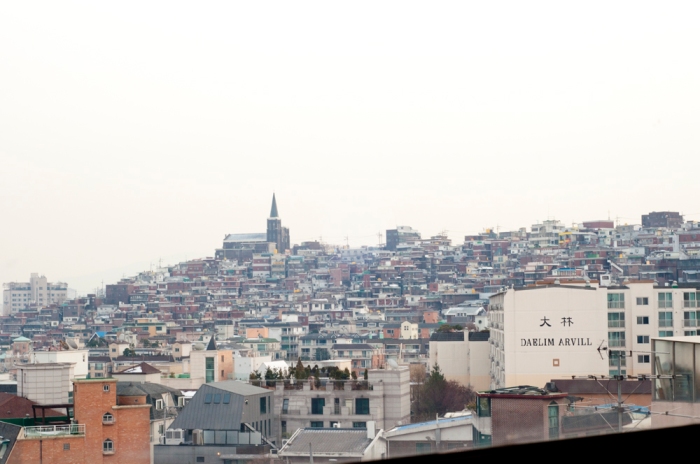 Practically every neighborhood in Seoul undergoes changes on a weekly basis, some quickly, some slowly.  Hangangjin is one of the quick ones, and is steadily turning itself into one of the trendiest, most culturally fresh areas of the city.

If any one thing can be said to have kickstarted this transformation, it’s likely the arrival of the Leeum Samsung Museum of Art (삼성미술관 Leeum) in 2004, which, among other things, shows that once in a while Samsung does something more than just make money.

Located just a short walk down Itaewon-ro-55-gil (이태원로55길) near Exit 1, the first thing visitors encounter is the outdoor sculpture garden, which, at the time of my visit featured a trio of pieces by the renowned London-based Indian artist Anish Kapoor, co-designer of the ArcelorMittal Orbit tower that twists above London’s Olympic Village and who was the subject of Leeum’s current Special Exhibition.  The first piece I came to was titled ‘Vertigo’ (‘현기증’), a pair of curved stainless steel rectangles.  Like your breakfast spoon, their concave side inverted and flipped everything they reflected, messing with the viewer’s perspective and causing a mildly unstable feeling.  The structures’ convex sides sat about two meters apart and reflected each other, creating a Russian nesting doll of the same image, each progressively smaller than the last.  In addition to ‘Vertigo,’ the garden also held ‘Tall Tree and the Eye’ (‘큰 나무와 눈’), stacked stainless steel orbs like air bubbles rising from the deep, and ‘Sky Mirror’ (‘하늘 거울’), which did exactly as its name implied. 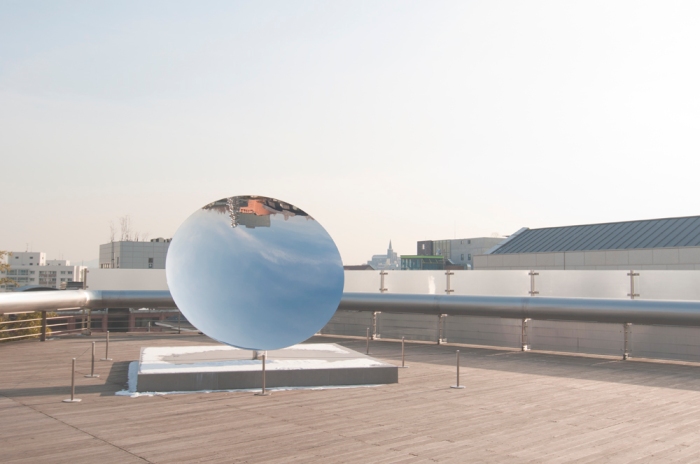 The museum itself is trisected, three different permanent collections in three different structures by three different internationally acclaimed architects.  Museum 1, designed by Mario Botta, houses the Leeum’s collection of traditional Korean art, which contains some three-dozen designated national treasures.  Visitors begin their tour on the fourth floor, where the celadon (청자) collection is housed before proceeding back down to the lobby, through the collections of Buncheong ware and porcelain (분청사기 / 백자), paintings and calligraphy (고서화), and Buddhist art and metal works (불교미술 / 금속공예) on subsequent floors.  Exhibition spaces are nearly completely dark, the only light coming from subtle spot lights that illuminate individual vases and scrolls, giving the galleries a solemn, almost religious feel. 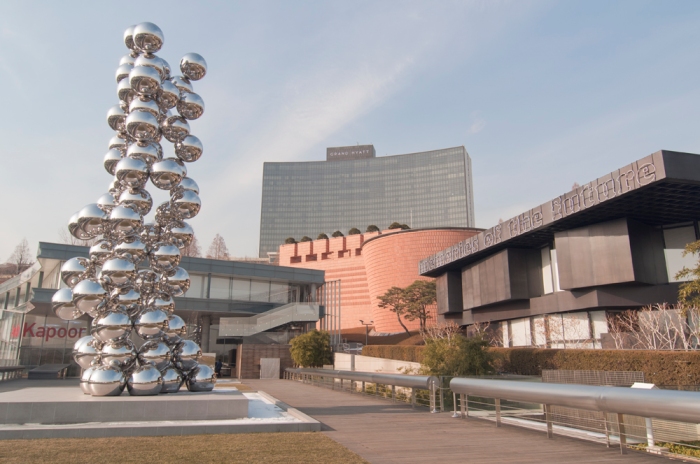 Museum 2, its building the product of Jean Nouvel, holds the modern art collection.  The second floor houses Korean modern art (한국 근현대미술) – quite likely a great unknown to anyone who isn’t Korean, the first floor international modern art, and the basement contemporary art.  It’s an impressive collection, as a quick listing of names will attest: Koons, de Kooning, Rothko, kimsooja, Twombly, Giacometti, Bacon, Gilbert & George, Nam June Paik, Basquiat, Warhol, Cindy Sherman, Zeng Fanzhi, Damien Hurst.  My personal favorite in the collection – not the best or most groundbreaking, but the one that spoke most closely to my interests and that I stared at the longest – was a work by the Korean artist 박이소 (Bahc Yiso) called ‘드넓은 세상’ (‘Wide World Wide’).  On an enormous light blue canvas, above a map formed by their names written out in Hangeul in a barely visible sky blue script were pinned hundreds of small white papers, each bearing the name of a place that managed to at once capture both the exoticism of the world’s geography and the fecundity of its languages: Araraquara, Erhchiang, Nagykanizsa, Bobo Dioulasso, Oshkosh.

The third section of the museum, the Samsung Child Education and Culture Center (삼성아동교육문화센터), was designed by Rem Koolhaas. 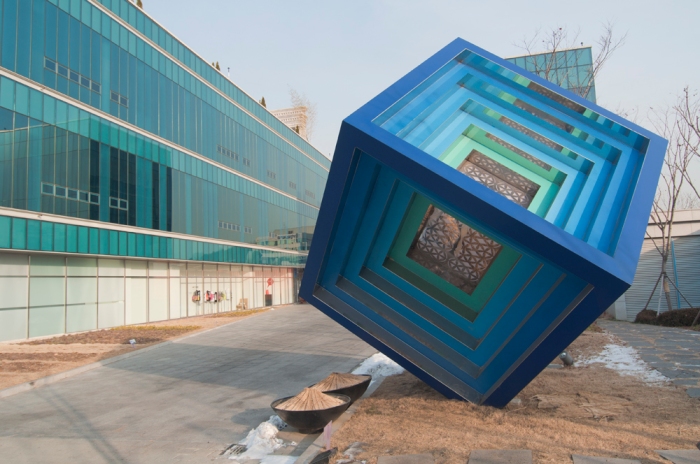 The second institution serving as a major cultural anchor for the neighborhood is Blue Square (블루스퀘어) performing arts complex.  Accessible directly from the station, it is Korea’s largest performing arts hall, with space both for musicals and concerts as well as cafes, a florist, a candy shop, restaurants, and souvenir shops.  ‘The Phantom of the Opera’ was in the middle of a run during my visit, and the main lobby had displays of costumes, a Phantom photo booth, and fake roses curling around the bases of the stairs’ handrails.

Coincidence or no, Samsung has their enormous hands heavily involved in Blue Square as well, with the two main theaters poetically being called the Samsung Electronics Hall (삼성전자홀) and the Samsung Card Hall (삼성카드홀).  All the romance that went into naming those also went into the building itself, which, in stark contrast to the Leeum, is incredibly bland architecturally, its mirrored blue glass façade making it look more like the resident of a suburban office park than a theater.  Offering a little bit of contrast is the structure behind the main building called NEMO, which, aping Platoon Kunsthalle, is made of orange and yellow shipping containers and was hosting a children’s performance called ‘Hello! Madagascar.’ 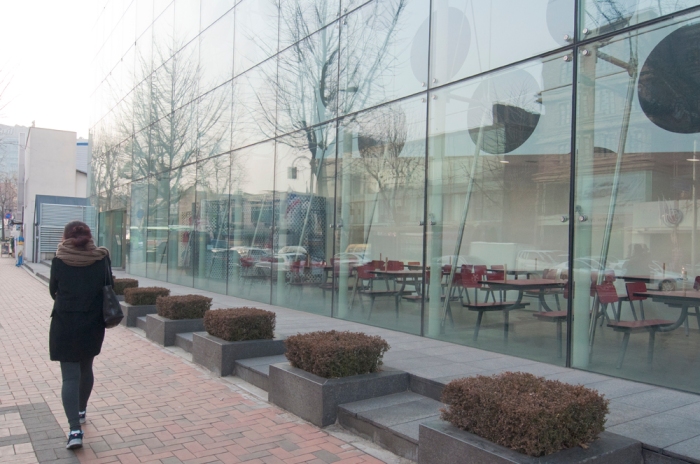 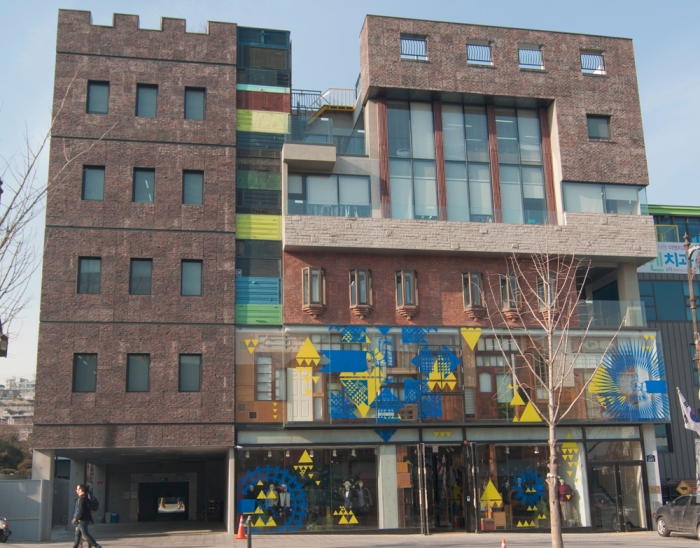 The Leeum and Blue Square are indicative of the greater Itaewon area’s tendency over the last few years to get less and less scruffy, a tendency that’s well apparent in the Hangangjin neighborhood, particularly as you get closer to Itaewon.  If five years ago you had told me that Comme de Garçons would open their Seoul flagship store here and not in Apgujeong, I never would have believed you.  But there it is, selling its 400,000 won-plus hoodies just a few steps past the turnoff for the Leeum.  And just a bit further down Itaewon-ro (이태원로) is Beaker, which pairs a Williamsburg aesthetic with Cheongdam prices: Band of Outsider flannels, bike accessories, 33,000 won soda can-sized bottles of artisanal shampoo. 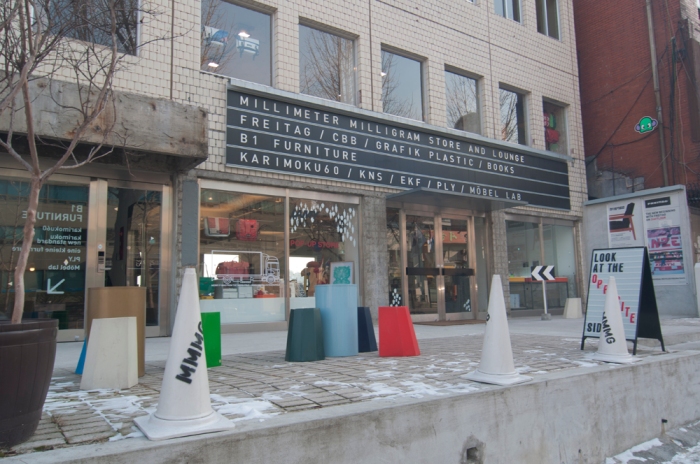 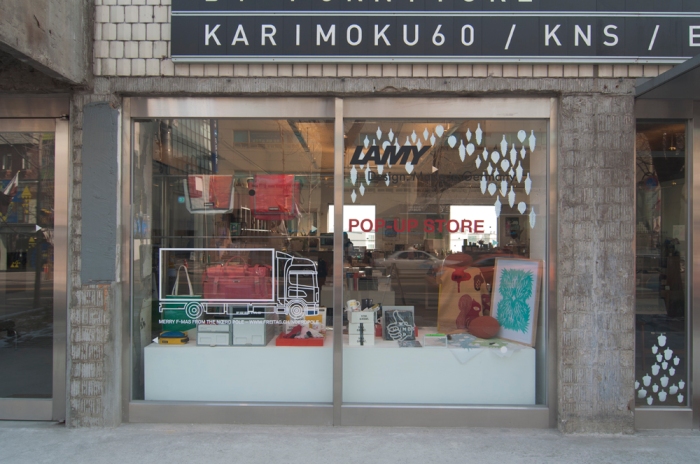 Not every new wine bar, restaurant, and boutique here is wallet emptying, thankfully.  Shops like Millimeter Milligram, not far from Exit 3, add to the offbeat, artistic atmosphere with quirky stationary, bags, and art supplies, and plenty of cafes provide a place to pause between shops or exhibitions.  One café that particularly stands out is Take Out Drawing (with another location in Noksapyeong), which, in addition to using organic and fair-trade products, also offers two-month artist residences, the second half of which include exhibitions of the residents’ work.  The café’s ‘newspaper’ has, alongside the menu, small profiles of current artists in residence in both Korean and English. 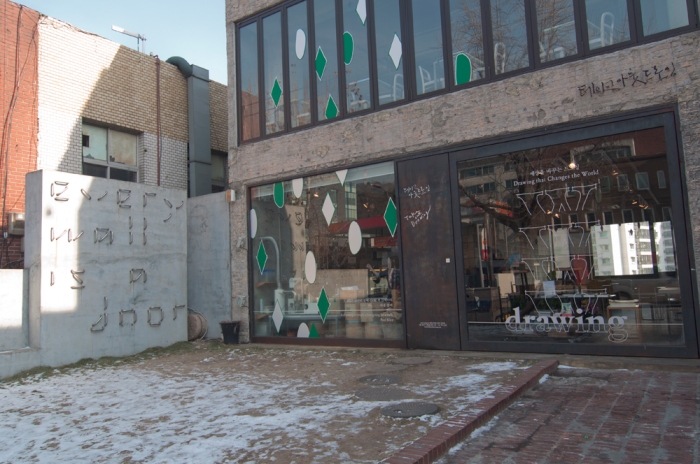 When it comes to eating in Hangangjin, Brazilian churrascarias, Japanese izakayas, and Spanish tapas joints, among others, contribute to an internationalized dining scene.  Hangangjin’s cosmopolitanism is just as evident if you turn off Itaewon-ro onto Daesagwan-ro (대사관로), or Embassy Street.  Running southeast from Itaewon-ro, it’s, naturally, dotted with embassies – Thailand, Kenya, Côte d’Ivoire – as well as the Lao ambassador’s residence, more international restaurants, and cafes and boutiques catering to the locals. 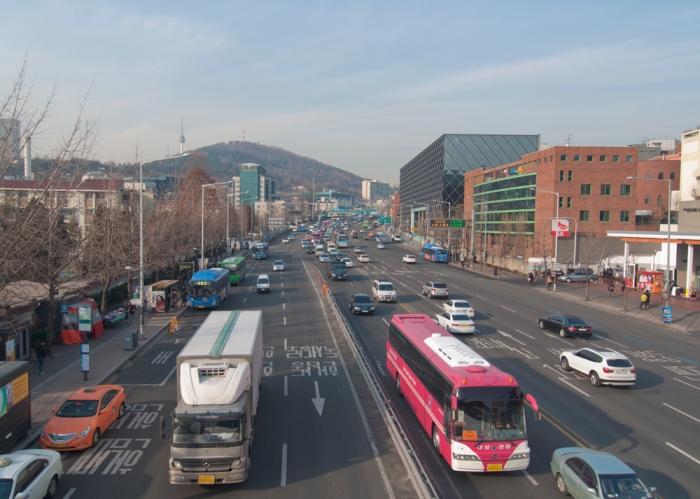 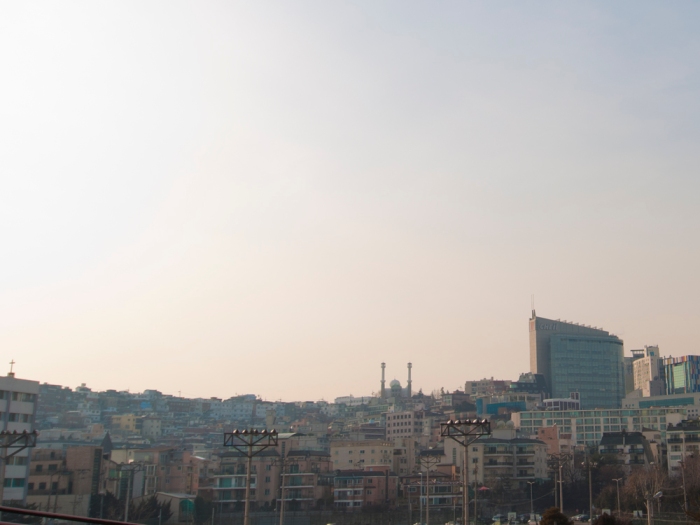 Daesagwan-ro connects to Hannam-dae-ro (한남대로), and walking along the latter between the station and the river gives you a chance to play a bit of embassy spotting.  (If you cross Hannam-ro via the pedestrian bridge near the Daesagwan intersection you’ll also get clear views of N Seoul Tower, the minarets and onion dome of the Itaewon mosque, and the Seoul Finance Tower in Gangnam.)  Among others I was able to pick out the flags of Vietnam, Spain, Burma, Bulgaria, and Italy, which, almost too neatly, had an olive Vespa parked out front.  In addition to the embassies, Hannam-dae-ro (or, rather, down long driveways leading off of it) is also where you’ll find the Chief Justice of the Supreme Court’s Residence, the Speaker of the National Assembly’s Official Residence, and the official residence of the Minister of Foreign Affairs and Trade, the last of these gated and watched over by a soldier with an extremely large gun. 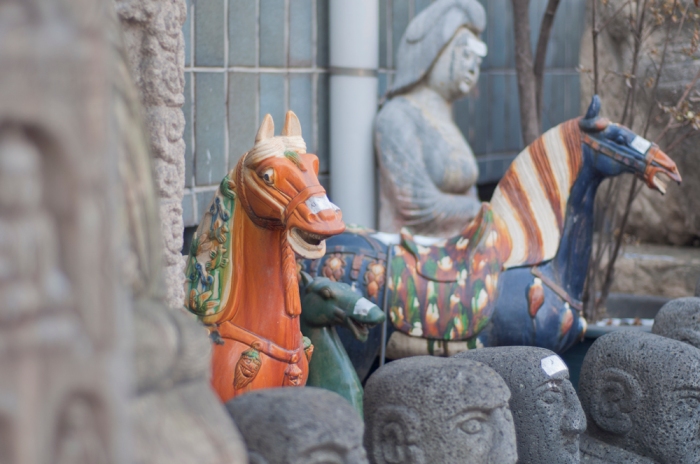 If instead of turning right down Hannam-dae-ro after leaving Exit 2 you cross the pedestrian bridge that runs over it, to your left you’ll see a Harley-Davidson store that stands in front of a small residential neighborhood.  Turning down the small side street there, Hannam-dae-ro-40-gil (한남대로40길), took me past a small collection of stone statues – horses, pagodas, a reclining Buddha – and soon led to an entrance to Eungbong Neighborhood Park (응봉근린공원), a large wooded hill cut through with walking paths.  There were also some tennis courts, badminton courts, playgrounds, and a square, but most of the park was left to the trees.

Of course, for an even bigger park, there’s always nearby Namsan Park (남산공원), which is easy to get to from Hangangjin.  Just go out Exit 1, U-turn, and follow the sidewalk until it ends.  There go up the steps to the left, cross the street, and you’re just outside the park.  At that point there was a sign pointing to a mineral spring (남산약수터), only 200 meters away.  I followed the sign up the driveway of an adjacent wedding hall, and by the time I made it past the parking lot things had already gotten remarkably calm and quiet, the traffic on Hannam-dae-ro just a faint murmur.  The path to the spring then took me past a small artificial stream, its water frozen where the course led over a small drop. 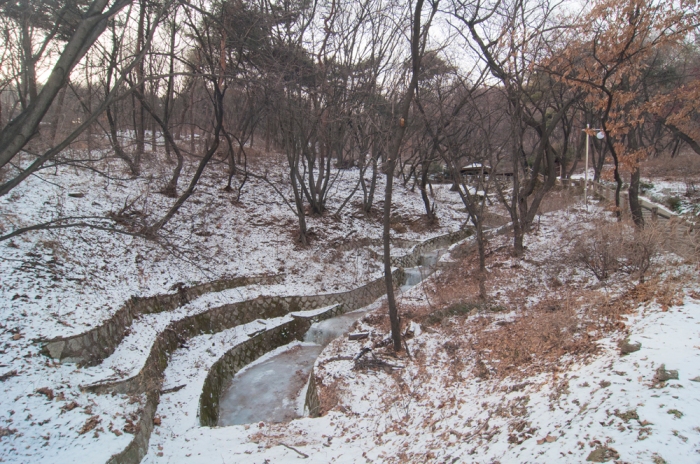 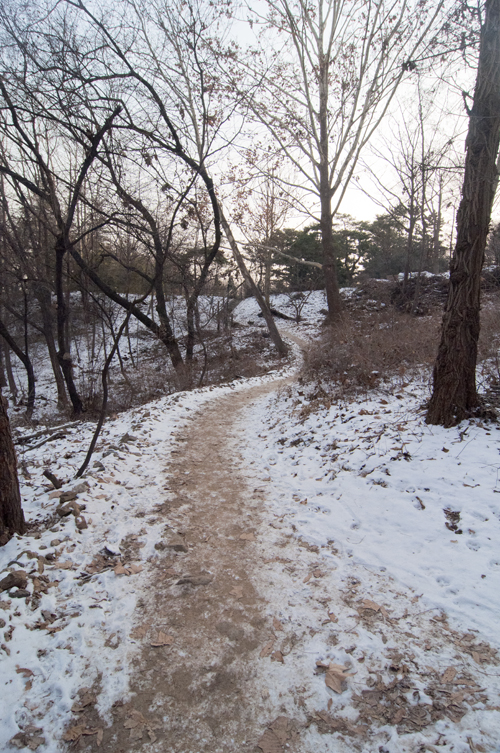 The first time I arrived at the spring I walked right past it, not realizing what it was.  My image of the spring was that it would be something bubbling up from the ground, but the Namsan spring instead poured out of two narrow metal pipes that jutted out of a stone wall on a wooden platform.  (Unfortunately, the spring water here is not fit for drinking.)  As an elderly hiker pulled a radio playing old pop music out of his bag and carried it with him to the adjacent exercise equipment, water poured out of the pipes in a steady stream, falling into stone basins underneath.  One of the basins was crusted up with ice around its edges; the other was not, as the water flowing out of that pipe had better aim, and poured neatly into the drain.

Exit 2 or accessible directly from the station 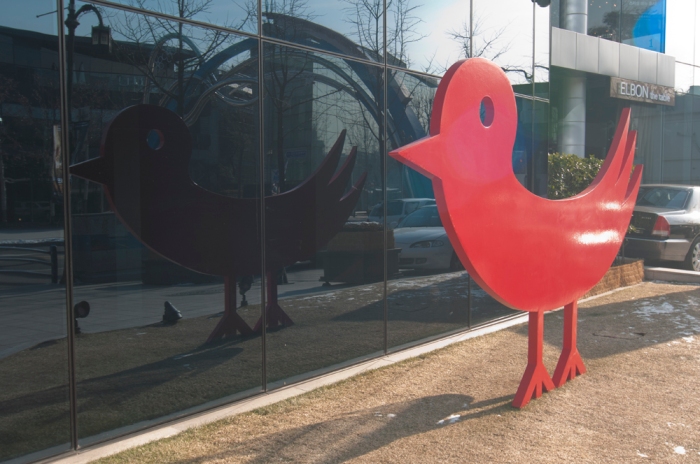