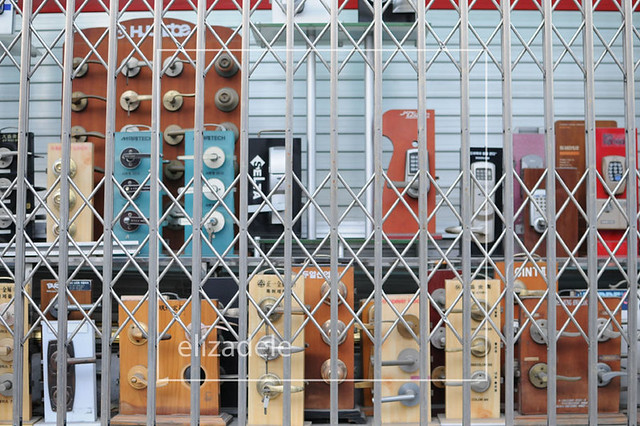 Tucked between Cheonhodae-ro (천호대로) and Cheonggyecheon (청계천) on the southwest side of Dapsimni Station is the little neighborhood of Yongdapdong (용답동).  Before getting to the moderately well-known antique markets on the opposite side of the avenue, Liz and I decided to pop in to this area for a look-see.  It was pleasantly busy on a Saturday afternoon, people out and about doing weekend neighborhood things: buying groceries, doing a bit of shopping, or just strolling about. 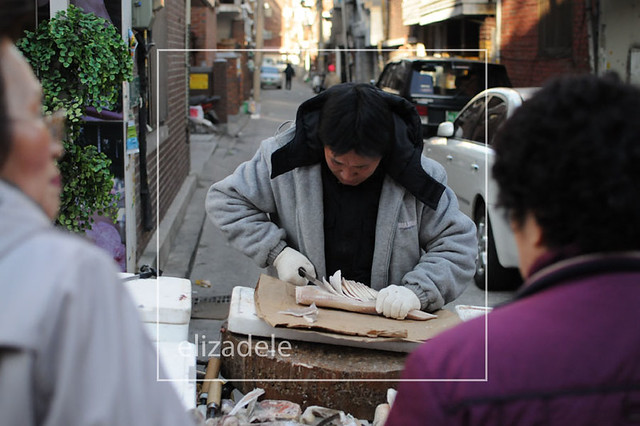 Down one street outside Exit 5 a modified truck was delivering live seafood to a restaurant.  A man in gumboots was standing in the bed, scooping fish out of large coolers and depositing them in the display aquariums outside the eatery.  His partner was running hoses built in to the truck to the curbside storm drain, getting rid of unnecessary water now that their merchandise had been unloaded.  Neither Liz nor I had seen this draining process before and both thought it was pretty neat – one of those little bits of ingenuity that you never think of but that when you see it seems both obvious and modestly remarkable. 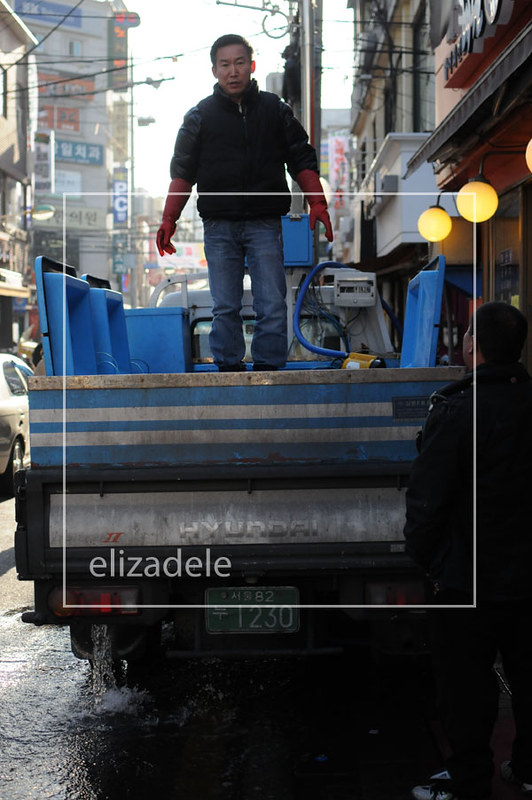 A bit further back in the neighborhood we stopped for a snack of tteokbokki, and while we ate we watched an ajjeosshi make a duplicate key for a customer at his corner shop: just a machine set up on the street, a stool, a small rack of uncut keys, and an electronic buffer and some other shoe repair and polishing equipment.  A truck was selling 대파, enormous green onions, that looked to be dying, their tops brownish and crisp, and a bit further down a fishmonger had stopped his cart of frozen fish.  When we walked past he was slicing flakes from one for a pair of ajummas, the slivers coming off in pieces about the size of a thick poker chip. 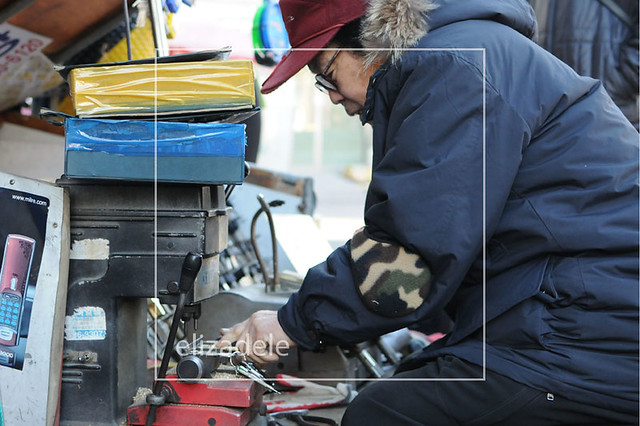 Back at the station we headed for Dapsimni Antique Town from Exit 1.  The area’s antique market coalesced here between the 1960s and 1980s, many of the shops moving from areas near Cheonggyecheon and Ahyeon-dong.

The Antique Town consists of three buildings, Dapsimni Antique Town 2-dong, 5-dong, and 6-dong; and further east, near Janganpyeong Station (장안펑) is Janganpyeong Antique Town, which we didn’t visit.  Each of the three buildings in the group is a long brick structure with one or two floors divided into a few dozen shops.  We started at 5-dong, which was incredibly sleepy, with no sign of any actual business taking place anywhere.  About the only sign of life was a group of antique sellers playing cards in one of the shops. 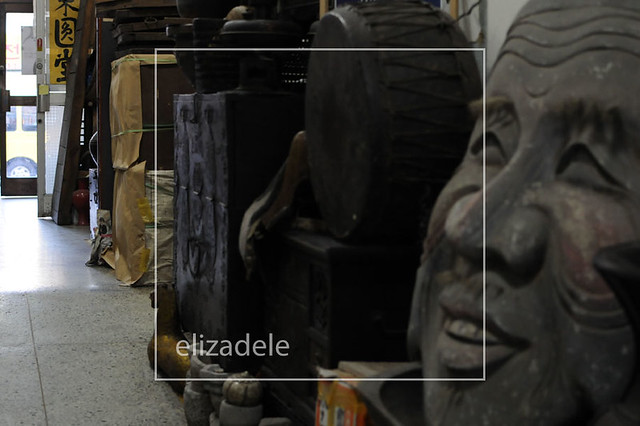 We were looking at an enormous metal mask with horsehair eyebrows and moustache leaning up against a hallway wall when the proprietor of Taehyeon (태현) came out and invited us into his shop.  Neither one of us knows the first thing about antiques and didn’t have any sort of idea about the authenticity or value or quality of the things in the shop (or anywhere else in Dapsimni), but it was fun to poke around nevertheless.  There were small wooden fish, drums, jewel boxes with mother-of-pearl inlay, and a pair of wedding gowns that the owner said were 100 years old. 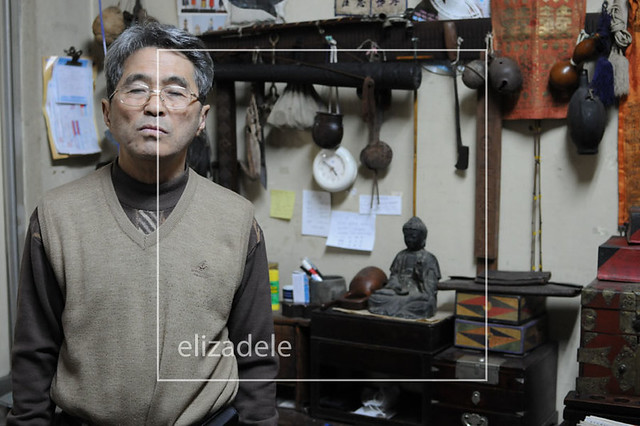 The next shop we stopped in was Song Juk Dang (송죽당), run by 김기순.  It was larger than Taehyeon and rather more eclectic.  To be found inside are: old radios and record players, a Southeast Asian xylophone, a small ceramic of a reclining nude, combs, pins, and several colorful perfume bottles, one of which depicts two lovers on a riverbank, mid-coitus, proving that the Joseon era wasn’t all just Hangeul-inventing and Japanese-repelling. 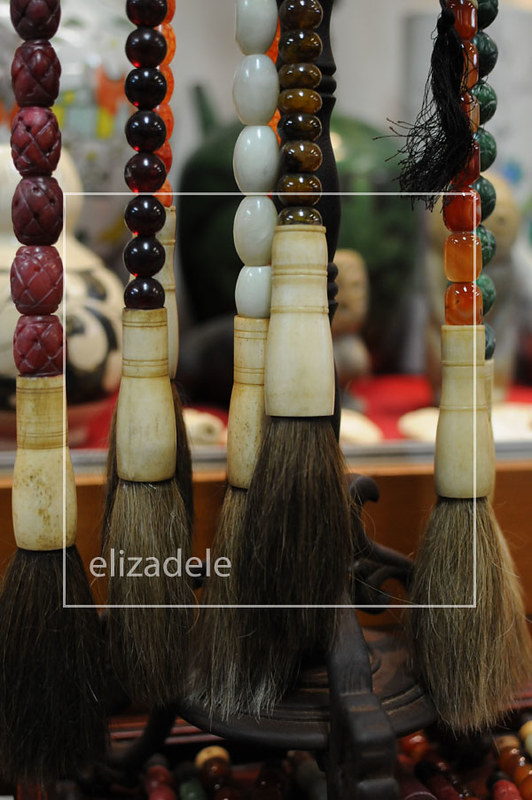 My favorite find in the store, however, was far less titillating: a little yellow hand-held radio, exactly like one that my family had and that I used to listen to the local Oldies station back in the early Nineties.  Not exactly an antique but, for this visitor at least, the most nostalgia-inducing item in the store. 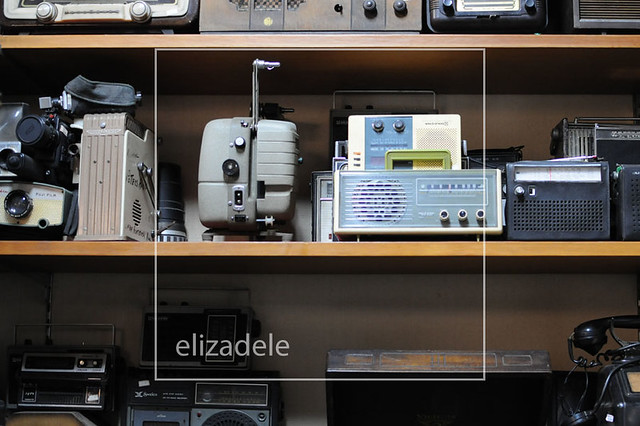 The hallways between shops are lined with antiques to and between 2-, 5-, and 6-dong we came across wooden bird cages, metal Buddhas of all different sizes, a large wooden statue of Guan Yu, a ship’s wheel, several Chinese medicine chests, and a set of stocks complete with chains. 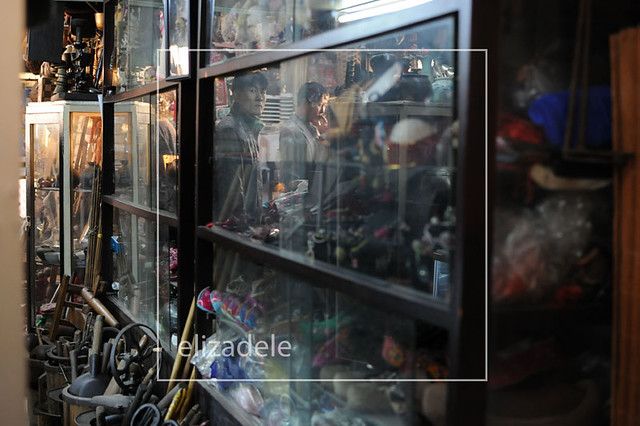 Probably our favorite sighting, however, came when we left.  Outside, with its back to us, a 1.5 meter tall bronze Buddha was sitting in the back of a truck parked on the side of the street, waiting to be brought into one of the shops, every bit the picture of Zen calm perched on his movable throne.  As we were admiring the curious juxtaposition a couple of the building’s security guards and another ajjeosshi came out and very skillfully maneuvered the fat man onto a rolling platform, then took him inside where he’d sit with the same serene calm.  A good thing too, because, judging by the lack of business actually occurring at the Antique Town, he’d be there for a long time. 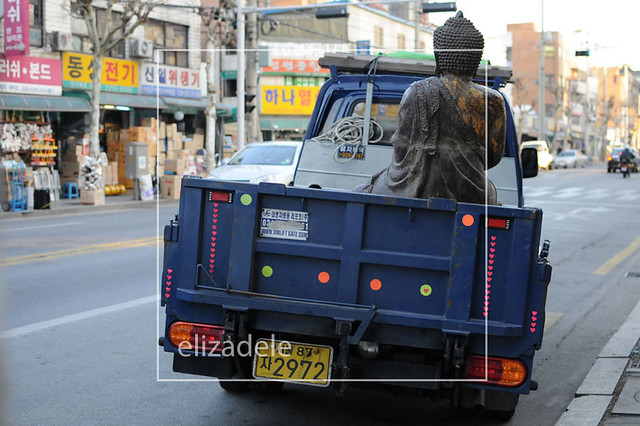 Walk one block northeast; the market buildings are between the first and second streets running parallel to Cheonhodae-ro (천호대로). 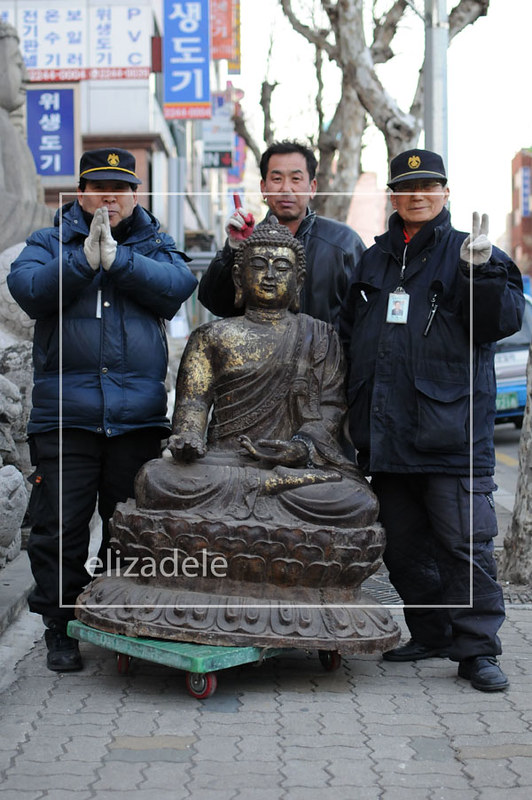