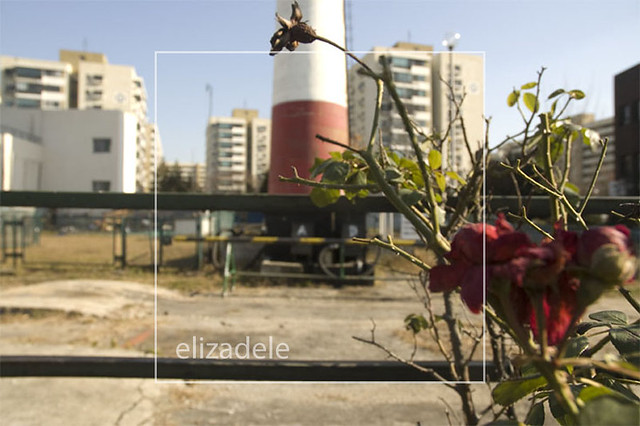 Living in Seoul, one grows accustomed to reading the city vertically.  I grew up in small and mid-sized Midwestern cities where architecture sprawls low and wide, and as such, was trained to see urban environments two-dimensionally, as a series of buildings placed next to each other.  But after living in Korea for a while one’s perceptions shift, and it wasn’t long before I was looking up as much as left and right.  Restaurants on the sixth floor, PC bangs on the tenth: Up is the way the city is built.  It takes a particularly unusual tower to strike one as out of place here.

Leaving Exit 3 to find some coffee to start our exploration, Liz and I noticed something that made us both pause.  To the east, across Dunchonno (둔촌로), was a towering red and white striped smokestack, set back from the road and sticking up conspicuously amid the fields of Dunchondong apartment complexes. 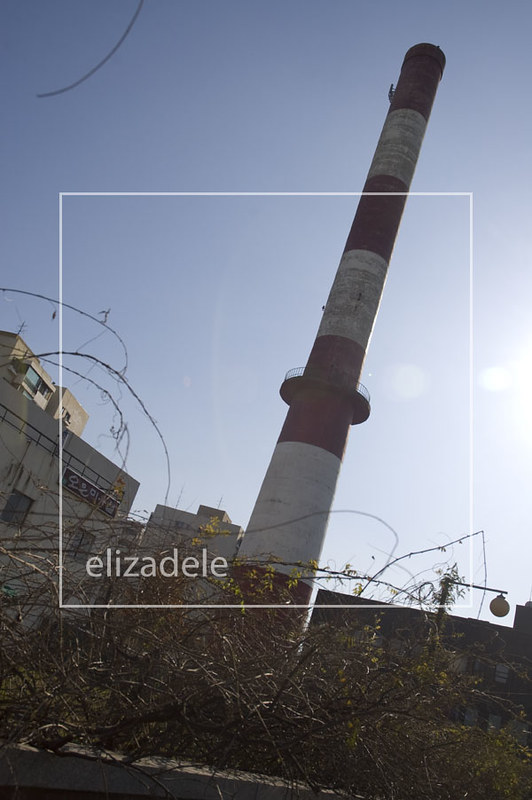 We crossed the street and walked toward it.  Next to the smokestack was a half-abandoned building, its white paint peeling and the windows on both stories curtained.  It looked completely forgotten until I noticed signs for a beauty salon, 오은미영실, at the end nearest the smokestack, its lone barber pole spinning away. 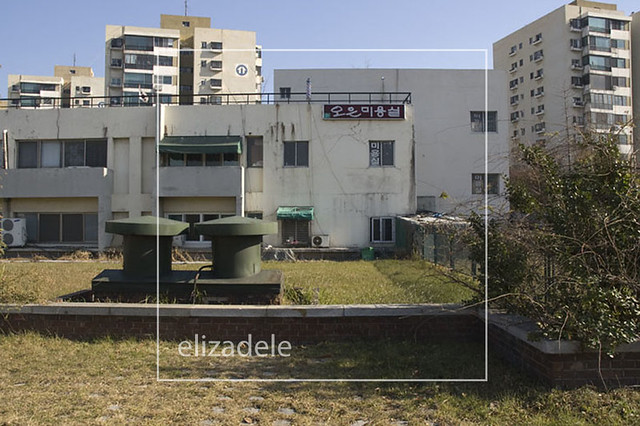 Set in front of the building was a small park that had once obviously been taken care of but had fallen into neglect.  Grasses were reclaiming the stone footpath and weeds that should have been trimmed back were sprouting up around benches and a steel sculpture set on a small pedestal in the center of the park.  The sculpture was gray and rectangular, with wide crosshatches and shallow depressions in between.  There was no inscription or plaque to say who it was by or what it was for, and when I knocked on it there was a dull, hollow sound. 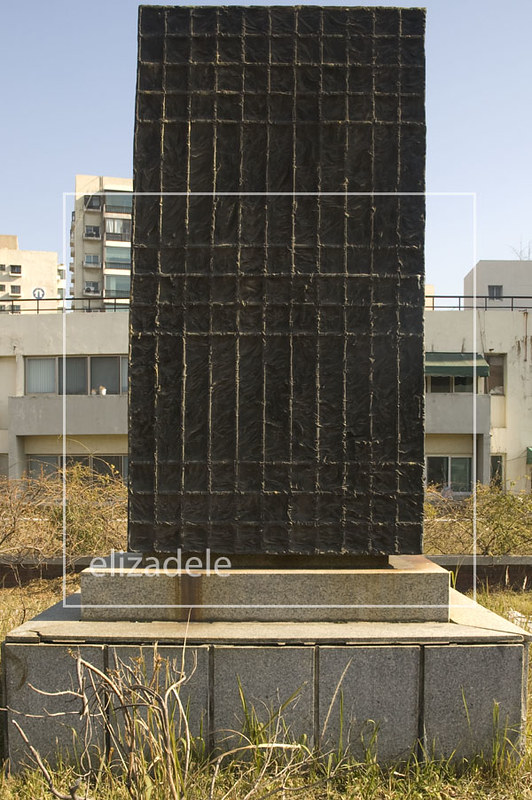 In one corner of the park a pair of trees shaded four benches, and even though weeds were creeping up their sides this little corner retained a pleasant air that was in contrast with the rest of the place.  You could almost imagine sitting there in the summer, your back turned to the white building and smokestack. 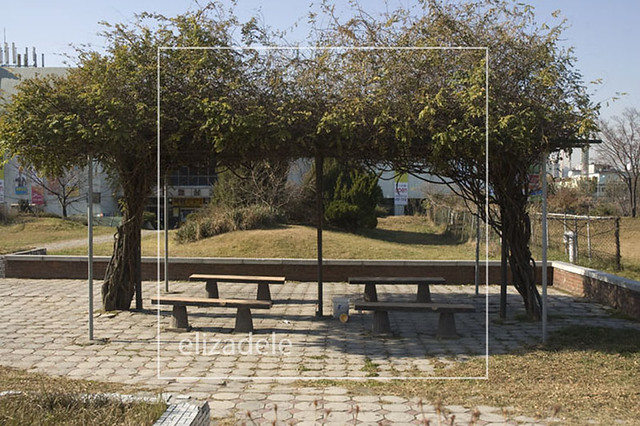 Perhaps oddest of all was the fact that all this was set in between two schools.  We continued wondering what exactly the smokestack was there for – or if, like the park and the building, it wasn’t in use anymore – until we walked around a fence and got a little closer.  Liz noticed bins of sand and stone and, tucked up next to a shed, stacks of concrete bricks. 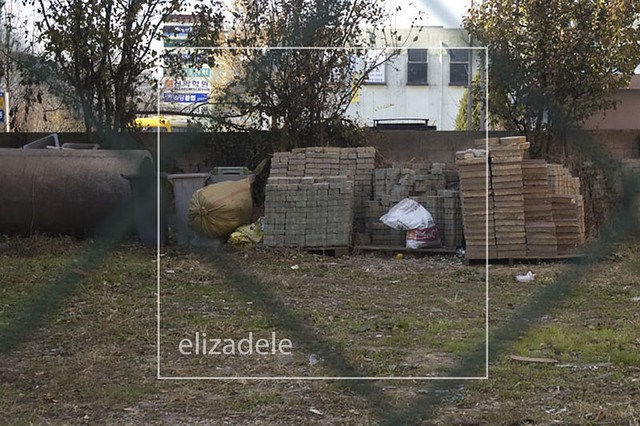 Around the other side of the building were more bricks and, underground below a large metal grate, an empty work area with some tools up against the wall.  The beauty salon was actually in operation and there was even a tiny, if run down, convenience store beside it. 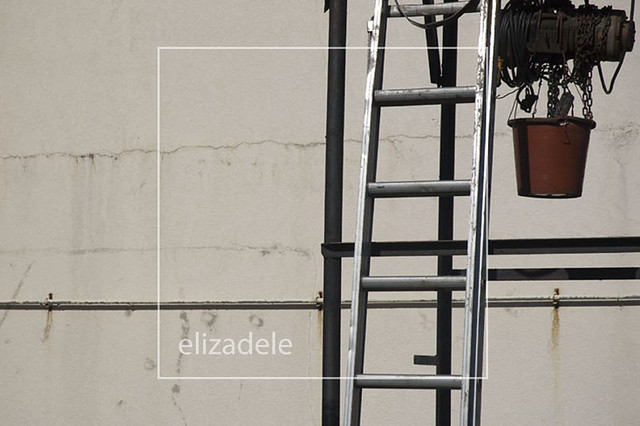 Back on the west side of Dunchonno, we walked south down the avenue to the northeast corner of Olympic Park before turning back north toward the station, ducking through the back streets.  We passed a series of three story red brick apartment buildings that, if not for their tile roofs, wouldn’t have been at all out of place back home in Madison or Chicago; and a bit further on Liz spotted an ajumma on her rooftop, talking on her cell phone while hoola-hooping. 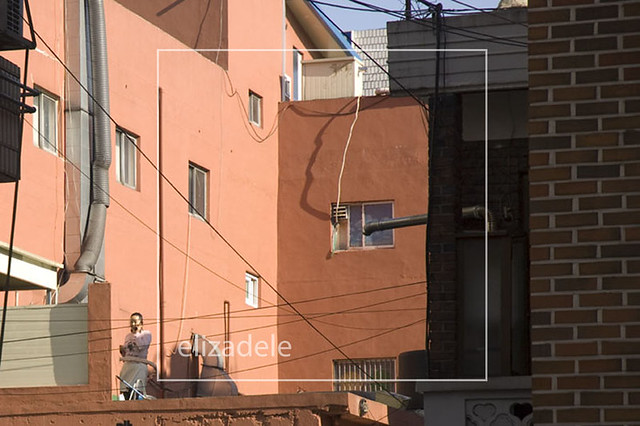 In the streets just off Dunchonno near the subway station is Dunchon Market (둔촌재래시장), which was filled with locals out doing their Saturday shopping.  We spent a half hour walking through the four or five streets the market lined, browsing and noshing on hoddeok.  Down the narrow street running parallel to Dunchonno the stall overhangs practically touched, creating a blue and orange canopy that blocked out the afternoon sun. 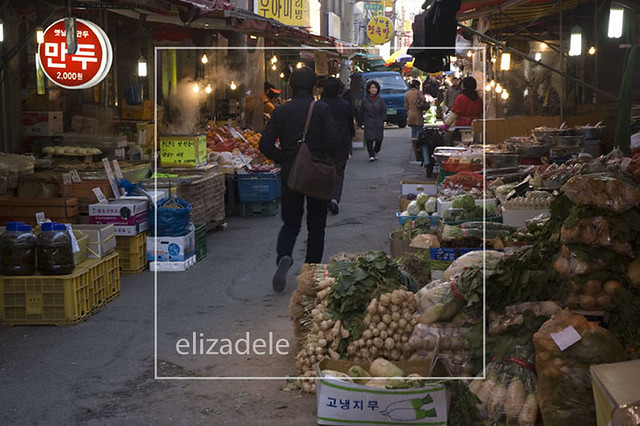 Quite a few stands offered snacks alongside their groceries, including one stall that had added fresh sugar donuts to the typical pojangmacha trifecta of tteokbokki, odeng, and twikim.  Unusual, but by no means a bad idea. 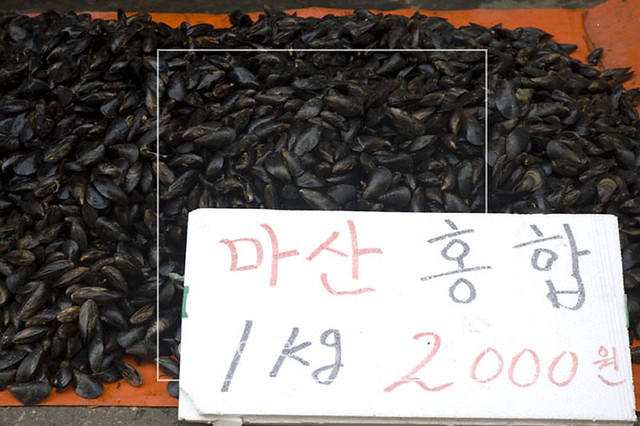 Buckets of seasoned crab and long silver ribbonfish could be found on Boram-5-gil (보람5길), and toward the end of the street was a huge pile of black mussels sitting on a bright orange tarp at 2,000 won a kilo.  If you’re in Dunchondong and planning on whipping together a Saturday night market feast you might as well pick up some of the homemade makkeolli sold in plain plastic bottles at a handful of stalls.  Our favorite sight, however, was the butcher who had draped his coat on a spare hook next to three whole pigs, letting it hang beside the slaughtered pork exactly as if it were hanging in his closet. 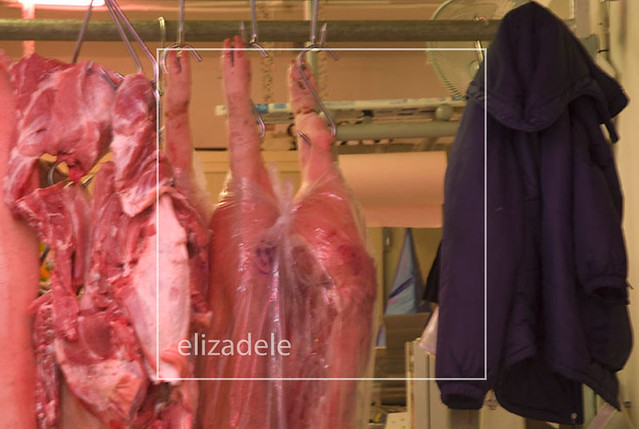 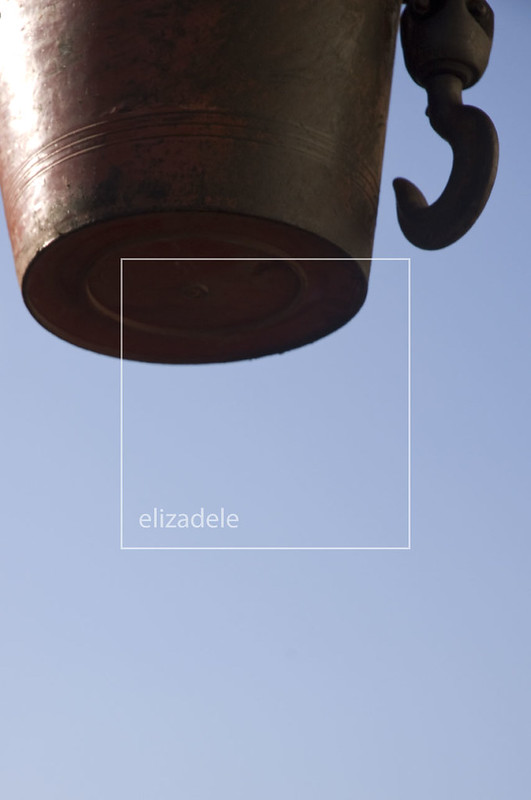